The Melting Antarctic Ice Sheet Is Heading Towards Irreversible Collapse

Computer models suggest that the melting West Antarctic Ice Sheet (WAIS) is melting at a rapidly accelerating rate. A new computer simulation shows that at current melting rates, the ice sheet will hit a critical point in about 60 years, and could result in a sea level rise of as much as 10 feet over the next several centuries.

The results of this latest simulation, run by a pair of scientists from the Potsdam Institute for Climate Impact Research, just appeared in the latest edition of the Proceedings of the National Academy of Science. 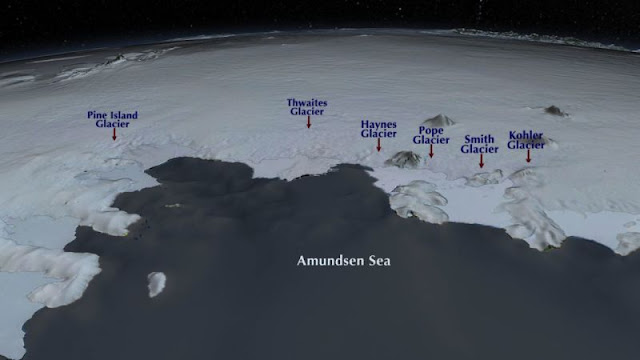 Over the past decade, scientists have carefully watched the Amundsen Sea sector. This region of West Antarctica is currently suffering tremendous losses in ice volume, and its ongoing collapse is triggering downstream effects elsewhere on the continent. A recent NASA study suggests that the Antarctic ice sheet is adding more ice than it’s losing, but this won’t likely be the case for much longer.
To get a sense of where this region is headed in the long-term, Johannes Feldmann and Anders Levermann ran their simulation to project the topographical conditions hundreds, and even thousands, of years from now —further in the future than any previous study.

The ultimate purpose was to determine whether or not the current Amundsen instability could lead to the entire ice sheet collapsing into the sea. The simulations suggest that this is in fact the case. 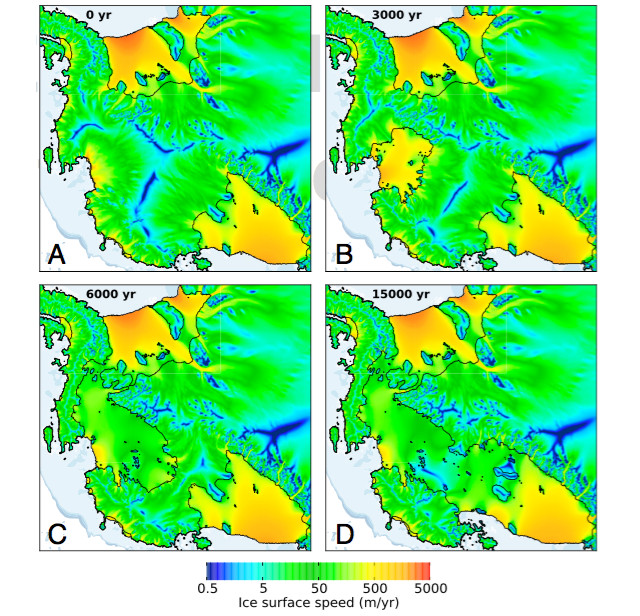 The models show that 60 more years of meltage at the current rate—a very reasonable estimate—will push the WAIS past a critical point-of-no-return.

Beyond this threshold, a complete, long-term disintegration is predicted to occur.

Feldmann and Levermann worry that the WAIS has already become critically unstable, and that this region has already passed the threshold point.
The study also predicts that, over the course of the next several centuries or millennia, the oceans will rise by as much as 10 feet (3 meters).

“Our results show that if the Amundsen Sea sector is destabilized, then the entire marine ice sheet will discharge into the ocean, causing a global sea-level rise of about 3 m,” conclude the authors in the study. “We thus might be witnessing the beginning of a period of self-sustained ice discharge from West Antarctica that requires long-term global adaptation of coastal protection.”

To get a sense of what some major city centers around the world would look like after a 10-foot rise in sea levels, go here and here.

Read the entire study at Proceedings of the National Academy of Sciences: “Collapse of the West Antarctic Ice Sheet after local destabilization of the Amundsen Basin”.

Posted by seemorerocks at 16:50