I wonder what a billionaire was doing down on the train lines. I think EU Times have it right. This is murder


Renowned lawyer John Jones who represented Julian Assange of Wikileaks died after being struck by train in West Hampstead. Police say they are not treating the death as suspicious.

Married father of two children, John Jones, 48, was suicided in April, for defending Wikileaks founder Julian Assange. Unfortunately we only got a hold of the news recently. There was a complete media blackout and total lack of interest from the media on this story, even from the few who did reported on it.

No one did any kind of investigative journalism at all and no one asked themselves what was a millionaire lawyer doing on the train tracks. Picking mushrooms?

There is a severe lack of information that we don’t even know where exactly this happened, in West Hampstead train station? In the middle of nowhere? No one interviewed the train driver, no one asked him what happened or what he saw.
Was he pushed in front of a train? Did he slip? Are there any witnesses? What about CCTV cameras?? UK is infested with those yet they prove useless now when we need them?

John Jones was a millionaire who lived in a $2 million villa in Hendon, north London with his Slovenian wife Misa Zgonec-Rozejand and had absolutely no reason whatsoever to commit suicide, he didn’t had any personal issues.
Furthermore he didn’t even leave a note behind for his wife or for his two young kids for that matter.

Mr. Jones was an Oxford graduate and he was specialized in extradition, war crimes and counter-terrorism, representing clients from around the world in high profile case.

Maybe it was Clinton’s doing or maybe it wasn’t! Draw your own conclusions but it appears that renowned people who expose Hillary Clinton or defend others who do, always end up dead.

This did make the British press after all - but not the liberal press. 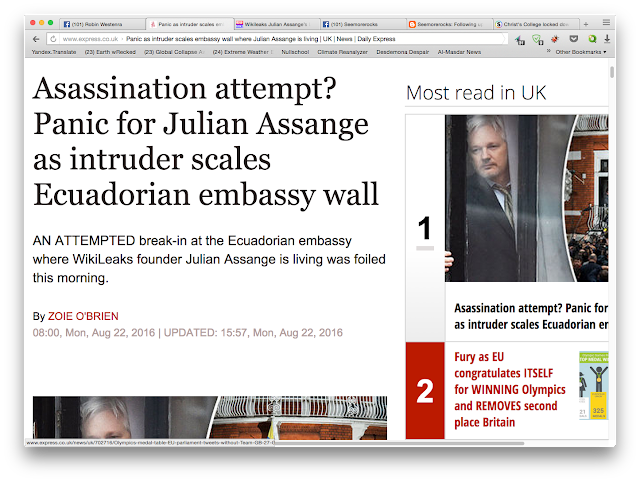 AN ATTEMPTED break-in at the Ecuadorian embassy where WikiLeaks founder Julian Assange is living was foiled this morning.