Pentagon decides to officially support Al Qaeda in Syria. Sets up “exclusion zones” to shoot down Syrian and Russian jets
The US is willing to risk war with Russia to protect Al Qaeda jihadists

The masks are coming off.

The Pentagon today made some big announcements.

One, it will protect the Kurds, much to Turkey’s dismay.

Two, it will protect Al Qaeda/Al Nusra jihadists, in a last gasp effort to overthrow Assad.

Three, the US is gearing up for a full on war with Russia. Be assured, Hillary Clinton will not press the reset button if she becomes President.

This is what neocons and the progressive left have been pushing for, and now it seems they will finally get it…war with the multipolar world, and it all starts with Russia.

Breaking: Did Washington Just Declare a 'No Fly' Zone in Syria? 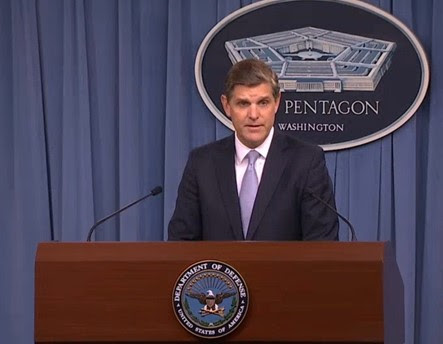 
Reading between the lines in today's Pentagon press briefing, a bombshell US policy shift is becoming more apparent: Syrian forces and their Russian partners are being told that conducting military operations in some parts of Syrian airspace opens them up to being shot down by the US military.

Pentagon Spokesman Peter Cook was asked numerous times in numerous ways whether this amounts to a US "no fly zone" over parts of Syria. His first response was vague but threatening:

We will use our air power as needed to protect coalition forces and our partnered operations. ...We advise the Syrian regime to steer clear of [certain] areas.

The policy shift was so apparent that, one-by-one, the press corps asked for clarification. Does this mean that the US would shoot down Russian or Syrian planes if they attacked any US-backed partners even if they were engaged against Syrian government forces? Are those "coalition forces" and "partnered operations" receiving US protection against attack from the air always in receipt of that protection, or only when they are actively engaged in military operations? What are the rules of engagement?

There was no clear answer from the Pentagon spokesman.

"Is this a 'no-fly' zone, then," asked another reporter. It's not a "no-fly zone" Cook responded.

Another journalist tried to get some clarity:


How is telling Syria not to fly in certain areas not a 'no fly' zone?

"Call it what you will," Cook eventually said.

Another journalist asked, "Do you think the Syrian regime has the right to fly over its own territory?"

Same answer: "We will use our air power as needed to protect coalition forces and our partnered operations."

The anti-Russia rhetoric in Cook's comments was inexplicable as well. According to the Pentagon spokesman, the suffering in parts of Aleppo is not due to its ongoing occupation by al-Qaeda's Nusra Front, but rather by Russian and Syrian government attempts to expel Nusra from the city. Cook's explanation defied logic. Russian actions in Aleppo are...

...only adding fuel to Syria's civil war and [do] nothing to degrade extremist groups, which is Russia's original reason for its military intervention in Syria.

The sentence only makes sense if one accepts the premise that al-Qaeda in Syria is not an extremist group, as it makes no sense to argue that bombing a certain group does nothing to weaken that group. Unless the Pentagon is suggesting that Russia and Syria are only bombing the civilian population, presumably for fun?

Whatever the case, this is a trial balloon. If this de facto "no fly zone" becomes a fact on the ground, it will be expanded beyond Hasakah and may be a US last-ditch effort to prevent Syrian government forces, aided by Russia, from taking back Aleppo and thus breaking the back of the foreign-backed insurgency.

This is endgame time.