It's strange to see Fox News interview Wikleaks' Julian Assange without a call for his murder.
Assange Promises "Most Interesting And Serious" Hillary Emails Are Yet To Come 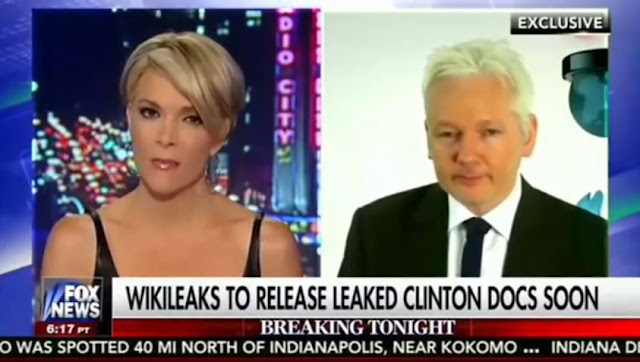 A lot of speculation continues to swirl around exactly what remaining information Wikileaks has related to Hillary Clinton and when it will be revealed.  Earlier in the week we noted (see "WikiLeaks' Assange Warns Clinton Campaign: More "Unexpected", Game-Changing Emails Loom") Assange's comments that Wikileaks is in the process of reviewing "thousands of pages of materials" related to Clinton which he described at "significant."

Yesterday, in an interview on Fox and Friends, Assange went a little further disclosing his belief that the information currently under review is the "most interesting and serious" yet.


“Well, I think the most interesting and serious [disclosures] relate to upcoming publications we have."

When asked whether WikiLeaks has information on the Republican campaign he noted that while they do have information its difficult to find anything more controversial on Trump than what comes out of his "mouth every second day."


"The problem with the Trump campaign is it's actually hard for us to publish much more controversial material than what comes out of Donald Trump's mouth every second day."


These are the full interviews

#PayToPlay: State Dept to reveal Clinton's meetings with possible donors only after election

The yet unreleased detailed schedules of the US former Secretary of State and now Democratic presidential nominee might be made public only in late December, while they might be of interest now, AP who have been seeking the calendars for years, reported.

The department expects to release the remaining some 2,700 pages of Hillary Clinton's schedules around December 30, its lawyers told AP in a phone conference this week. The news agency has "formally asked" the State Department to speed up the process so that the documents might be analyzed and published by October 15, some three weeks before the elections.

Calling the estimated date of release "unacceptable," Donald Trump's spokesman Jason Miller said in a statement that "voters deserve to know the truth before they cast their ballots."

RTVerified account‏@RT_com
15k new Hillary emails discovered as evidence of Clinton Foundation pay-to-play scheme grows
6:30 PM - 23 Aug 2016
Earlier this week, the Associated Press (AP) has revealed that more than half of all Clinton's meetings with the people outside the government, when she was secretary of state, were with donors to her private foundation.

"At least 85 of 154 people from private interests who met or had phone conversations scheduled with Clinton while she led the State Department donated to her family charity or pledged commitments to its international programs, according to a review of State Department calendars released so far to The Associated Press," the investigating journalists reported, saying that "it's an extraordinary proportion indicating her possible ethics challenges if elected president."

In total, the Clinton Foundation received as much as $156 million from those 85 donors, who contributed financially either personally or through companies or groups, according to AP. At least 20 of those donors gave more than $1 million each, the report added.

Some of Clinton's emails that she failed to turn over to the US government, but were released after a Freedom of Information Act request, suggest the charitable foundation might have possibly rewarded its donors with special access and influence inside the State Department. The social media reacted with a #PayToPlay hashtag, with Twitter users angered by the Democratic candidate's alleged "corruption." 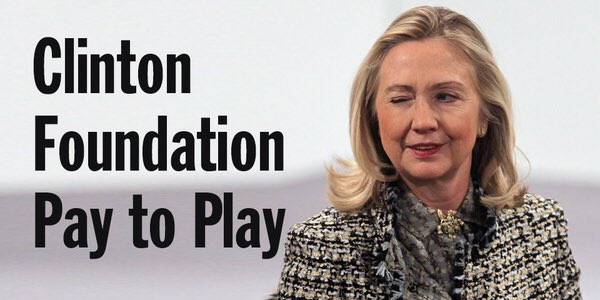 3:07 AM - 11 Aug 2016
Although such meetings do not appear to violate legal agreements signed by both former president Bill Clinton, and Hillary Clinton ahead of her four-year tenure as secretary of state, "the frequency of the overlaps shows the intermingling of access and donations, and fuels perceptions that giving the foundation money was a price of admission for face time with Clinton," AP said.

So far, about half of Clinton's minute-by-minute schedules have been released, after the documents are reviewed and censored page-by-page to remove personal details of her schedule, such as private phone numbers or email addresses. In some cases, the department has also "censored names of people who met privately with Clinton or the subjects they discussed," according to AP.

The AP report has been criticized by the Clinton campaign, who called it flawed and "outrageous" for its calculations not including meetings with foreign diplomats or US government officials. The news agency argued it focused its analysis "on people with private interests," as such meetings and calls were outside Clinton's official duties yet "she chose to include [them] in her busy schedule."

The detailed analysis of apparent relation of the money flow into the Clinton family foundation to the then secretary of state decision making policies is so "significant" it even got the attention of the American mainstream media, who usually turn a blind eye on "anything that Hillary Clinton has done in relation to the Clinton foundation," US media analyst Lionel told RT.


"They have shown no interest in anything until now... It seems the American mainstream media have been acting almost as agents, apparatchiks, campaign contributors, associates of the Clinton campaign," he said, adding: "Every single bit, every news story, every accusation, anything that might be the slightest bit embarrassing, untoward, inconvenient, problematic [for the Clinton campaign] is being ignored altogether."
Posted by seemorerocks at 11:54