Locking horns in the Straits of Hormuz 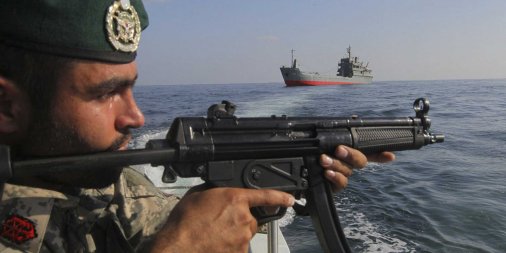 Following the recent revelation that the Obama administration paid Iran $400 million in ransom money to release 4 US hostages, perhaps Tehran was looking for a tip, because moments ago a US defense official said that four Iranian ships carried out a "high speed intercept" of a US destroyer in the strait of hormuz, an incident that the official dubbed "unsafe and unprofessional", cited by Reuters.
As Reuters adds, the four vessels belonging to the Islamic Revolutionary Guard Corps "harassed" a U.S. destroyer on Tuesday by carrying out a "high speed intercept" in the vicinity of the Strait of Hormuz, a U.S. Defense official said on Wednesday.

The Defense official, speaking on the condition of anonymity, said two of the Iranian vessels came within 300 yards of the USS Nitze in an action that was "unsafe and unprofessional."

As a reminder, on January 12, the Iran navy seized 2 US navy boats and their crewmen, for "illegally entering Iranian waters." It released the captives one day later after a thorough questioning, and receipt of an apology. Less than a week later, on January 17, Iran would receive $400 million in non-USD denominated bills to release 4 US hostages.