This latest update has just gone up. It is wellworthwhile keeping up with the comments.


So, the storm has been raging for a while now. The latest Environment Canada weather map shows it's at 984 hPa.
According to this tweet by PhD climatologist Brian Brettschneider a IABP buoy from the University of Washington measured a lowest central pressure of 966.5 hPa, which is somewhat lower than the 968 hPa reported by Environment Canada (see previous update): 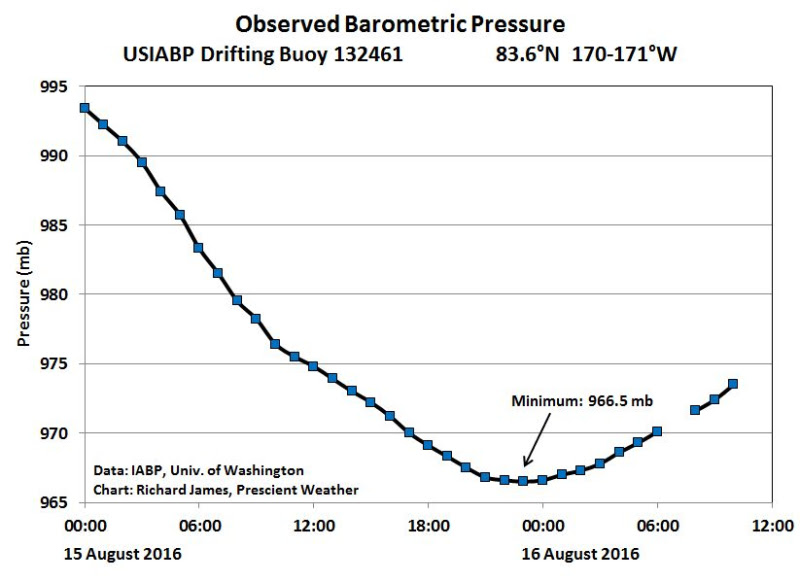 This animation of Uni Bremen sea ice concentration maps for the past 4 days shows how the ice has started to follow the winds. Also notice how far open water is reaching into the ice pack now, almost getting past 85N:

The impact on the extent and area graphs isn't as outspoken as in 2012, because there was a lot of weak, preconditioned ice back then that was poised to go poof. But make no mistake, the current exceptional weather is keeping 2016 in the race for that top 3 position when the minimum is reached next month.
Cryosphere Today sea ice area as calculated by the inimitable Wipneus has 2016 in second place now: 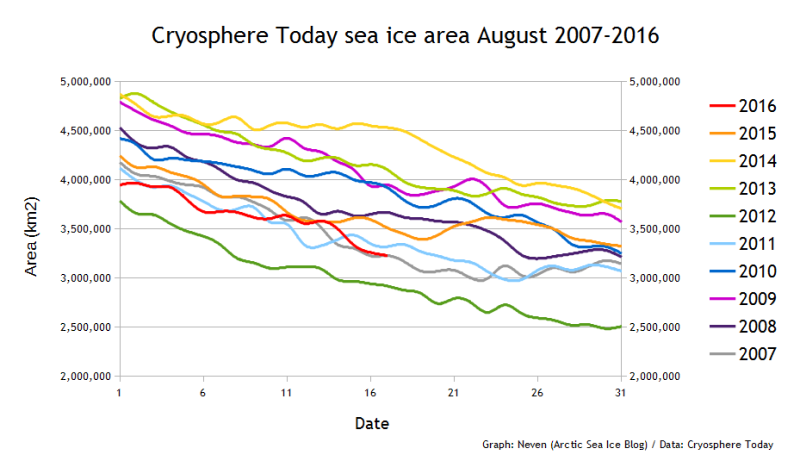 And on the JAXA sea ice extent graph yesterday's century break was followed by a solid 73K, keeping the 2016 trend line close to 2007, which had a couple of slow days around this time, so 2016 could be second here too this weekend: 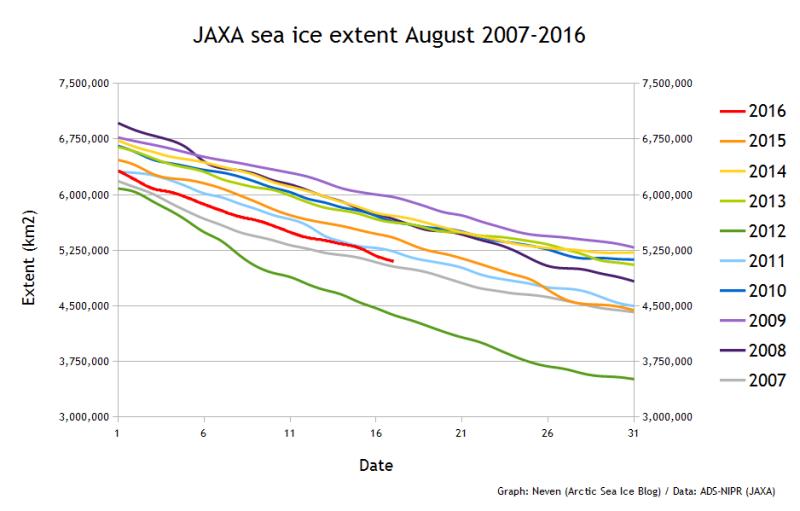 What will the storm do next? Here's what the ECMWF forecast model has to say about that for the coming 6 days (click for a larger version, and go to the ASIGForecasts page for daily forecasts):

The storm's pressure will hover around a respectable 980 hPa for a couple of days, but after the weekend some serious re-intensification is forecast!
Here's another animation of the entire 11-day ECMWF forecast, as provided by the Tropical Tidbits website, so we can see what the cyclone's central pressure will be:

This is serious sh... stuff. This is just 2-3 days out and so it is quite likely now that the storm will re-intensify to reach another bottom central pressure of 972 hPa, with possibly a few days of lower than 980 hPa to follow. We may be receiving an answer to one of the two questions I posed yesterday, much sooner than expected: Can this storm be labelled a Great Arctic Cyclone as well?
Yesterday it seemed as if this could become the not Great, but All Right Arctic Cyclone of 2016, but now I'm tempted to say this storm is another GAC, the second in just five melting seasons. Maybe it's just coincidence, or maybe this has something to do with it: 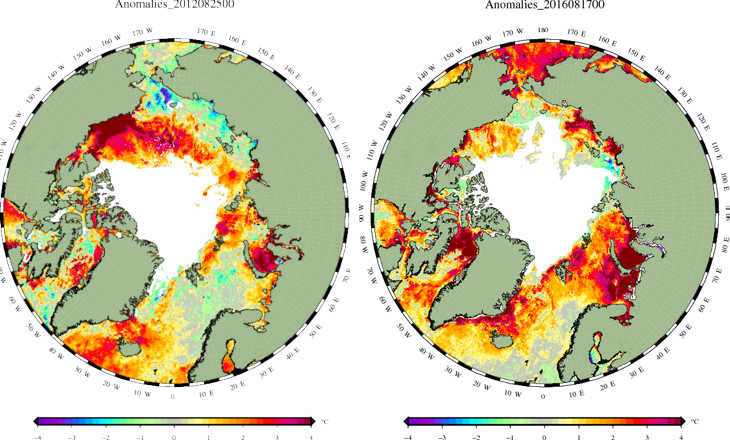 These images depict sea surface temperature anomalies as reported by DMI. On the left it's 2012 a week from now, on the right it's the latest image (yesterday). As you can see, exceptional sea surface temperatures all over the Arctic. The open water in the Beaufort Sea may not be as warm as it was in 2012 - it's warmer everywhere else - but it's warm enough to do some serious bottom melting damage to all the ice that is moving towards it, in the wake of the storm's massive winds. And then there's the waves and the churning and the Ekman pumping...
Looks like we may get an answer to that other question soon as well: What will this do to the ice? Stay tuned, if you weren't already.