To summarise, this is what I take from the following:


"Although temperatures are now going down and the sun is too low to provide enough energy to melt the ice from the top, massive winds will keep moving the ice around and promote bottom melt. But more importantly, these atmospheric conditions are going to heavily compact the highly dispersed ice pack, and cause some extra transport of ice towards the North Atlantic that is running hotter than ever."


26 August, 2016
During the melting season I'm writing (bi-)weekly updates on the current situation with regards to Arctic sea ice (ASI). Because of issues with data based on the SSMIS sensor aboard DMSP satellites, I mainly focus on higher-resolution AMSR2 data from the Japan Aerospace Exploration Agency (JAXA), as reported on the Arctic Data archive System website. I also look at other things like regional sea ice area, compactness, temperature and weather forecasts, anything of particular interest.
The animation below consists of NSIDC
sea ice concentration maps, one for each ASI update.
Check out the Arctic Sea Ice Graphs website (ASIG)
for daily updated graphs, maps, live webcam images, and
the Arctic Sea Ice Forum (ASIF) for detailed discussions.

August 26th 2016
A spectacular start to the melting season is being matched by a spectacular ending. And that's probably putting it mildly.
In the past 10 days we've witnessed a storm that comes close to equalling the Great Arctic Cyclone of 2012 (see the three updates I've written: 1, 2 and 3) and even though cyclonic activity has now lessened, it is still there. Worse still, it is going to be joined by massive high pressure on the American side of the Arctic.
That means - you've guessed it - that the final stage of the melting season will be dominated by a so-called Dipole set-up, where the pressure gradient between the high over the Beaufort Sea and the low over the Siberian Seas is going to have a major impact on the final shape of the ice pack. Just when you thought you had seen it all, the Arctic throws another curve ball.
Although temperatures are now going down and the sun is too low to provide enough energy to melt the ice from the top, massive winds will keep moving the ice around and promote bottom melt. But more importantly, these atmospheric conditions are going to heavily compact the highly dispersed ice pack, and cause some extra transport of ice towards the North Atlantic that is running hotter than ever. It's like putting a plate of biscuits in front of the Cookie Monster (om nom nom).
Here's an animation of Uni Bremen sea ice concentration maps from the past week to show you the current state of Arctic sea ice:

Two questions pop up immediately: How much of the Wrangel Arm is going to survive this final onslaught? And how far will that wedge of open water, or 'bite' as we've called it during previous melting seasons, be pushed towards the pole? Further than the 86N we saw in 2014?
The rest of the update will be about what's in store and what this will probably mean for the minimum.

Sea ice extent and area (SIE & SIA)
Unfortunately JAXA data hasn't been updated for two days. I read that Japan is dealing with the consequences of a series of typhoons, so maybe that has something to do with it. Or maybe there's a planned electrical outage again, like there was in June. Either way, let's hope data service is resumed soon. This is the worst possible time for having no JAXA data. :-(
Here's how the graph looks like with data up to August 23rd: 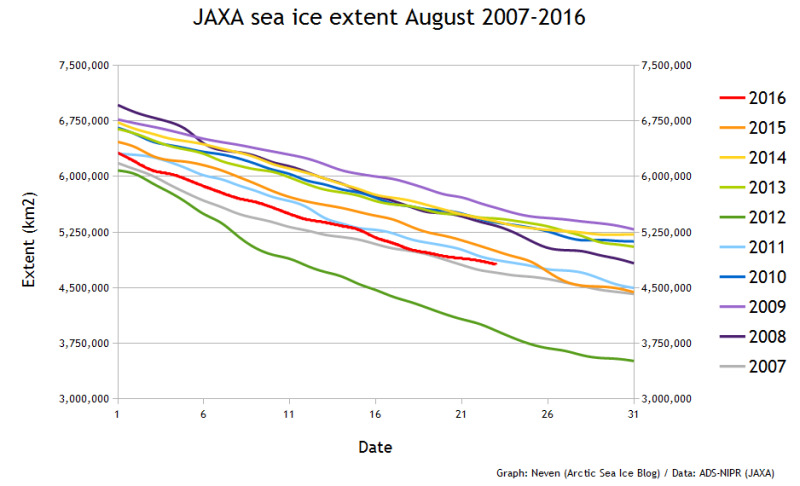 The effects of the storm haven't been as pronounced as in 2012 (this year's storm hit later and the ice is probably somewhat more resilient due to a lack of preconditioning), but the 2016 trend line is still in 3rd place, and given the current weather forecasts it could seriously threaten the 2007 minimum. It will have to drop more than 750K for that, though, as 2007 kept going lower up until the last week of September.
However, it's an entirely different story for Cryosphere Today sea ice area (as calculated by Wipneus over on the Forum): 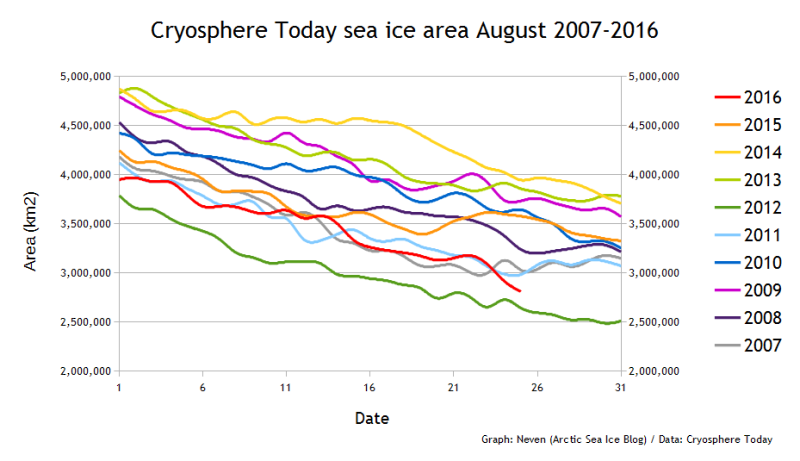 Due to a massive drop of 170K, followed by a 109K drop reported today, CT SIA is currently lower than all minimums on record, except for 2012, which means that a final second position is now already secured. Dropping to 2012 levels will require something that surpasses the dictionary word of unprecedented, but the weather forecast is pretty insane (see further below), so who knows. Currently, the difference with the 2012 minimum is 575K. Last year 484K was lost from today's date until the minimum on September 8th.
Compactness
With no JAXA data reported I can't post an actual CAJAX graph. It would probably be lowest for the date given those huge drops for CT SIA. In this respect something interesting is happening with regards to the CAMAS graph, as MASIE does seem to match CT SIA's massive drops. Actually, MASIE is currently lower than 2012, the only dataset so far: 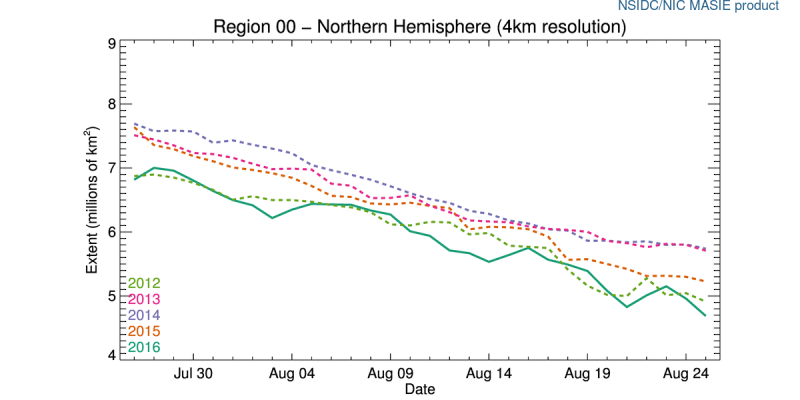 And so CAMAS compactness isn't shooting down: 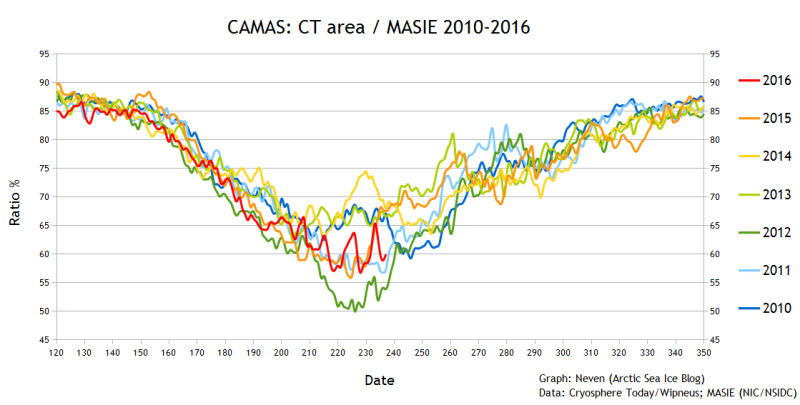 CÁMAS compactness is still quite low, but you'd expect it to be lower, as the ice pack is quite dispersed after the re-intensifying GAC of the past two weeks. Huge CT SIA losses are to be expected because of the flashing effect where large swathes of ice can disappear from the sensor's view, which in principle shouldn't happen with MASIE because operational analysts (ie humans) check various data sources to determine the ice edge.
Moreover, when GAC-2012 happened, IMS (the operational analysis product that MASIE is based on) was slow to catch on to the big losses, or rather the passive microwave products immediately reacted to the chaos below and then slowed down somewhat when some of the vanished ice re-appeared. In fact, a paperwas written by Walt Meier afterwards that showed how much passive microwave data products and MASIE diverged for a while during and immediately after the storm:

In early August 2012, an even more extreme example occurred when a large region of ice disappeared from passive microwave data over the course of just a few days, while MASIE continued to show the region as ice-covered. In this case, ship and aircraft observations in the region contributing to analyses by the Alaska National Weather Service Ice Desk confirmed the presence of substantial ice, validating that MASIE was correct and passive microwave was vastly underestimating the ice extent in the region.

So, there's a bit of a mystery there. It may have to do with cloudiness, which limits the resources operational analysts have at their disposal. Or perhaps something changed in their procedures. Or perhaps the situation right now isdifferent from 2012, when ice was much more preconditioned, and this time around it's simply the disappearance of the Wrangel Arm ice (see Wipneus' latest NSIDC delta map here). Either way, MASIE is the most accurate data set out there, in principle, but it probably isn't consistent enough for interannual comparisons (as explained here).
One last graph to show how much CAMAS compactness is out of sync with other compactness measurements, here's Wipneus' compactness graph that uses SIE and SIA data from the same source, NSIDC (25 km resolution), JAXA (10 km resolution) and Uni Hamburg (3.125 km resolution): 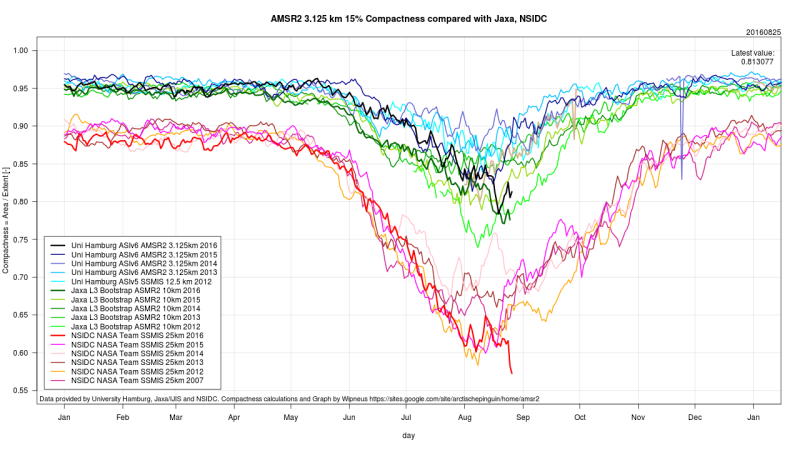 Lowest compactness on all three graphs, lowest on record for NSIDC and Uni Hamburg.
For a more thorough explanation on compactness read the Melting momentum part 2 blog post.
And sorry for the long text. It's now time for the most interesting part of this update.
Weather conditions
Here's the animation of Danish Meteorological Institute SLP images showing the distribution of atmospheric pressure during the past two weeks:

You can clearly see the GAC (or almost) come into existence and then re-intensify twice. But as if this wasn't spectacular enough, the animation's final frame shows a glimpse of what's to come: massive high on the American side, massive low on the Siberian side.
Here's what the ECMWF weather forecast model has in store for the coming 6 days (click for a larger version, and go to the ASIG Forecasts page for daily forecasts):

Look at that pressure gradient! Look at those isobars! I can't remember ever having seen such a potent Dipole before. Tropical Tidbits is showing a 972 hPa central pressure for tomorrow and 1041 hPa on the other side four days from now. This is insane, truly insane...
These winds are going to cause massive compaction and transport, and who knows where that Bite may end up. The only moment where this would've been even worse, would've been during June or July as it would have caused a massive surge in temperatures and huge amounts of solar radiation, preconditioning the ice for an August onslaught à la 2012.
The Dipole is also bringing relatively warm air from lower latitudes with it, but cold temps are slowly spreading over the Arctic nonetheless. Mind you, much less than in the past, and not enough yet to offset losses from bottom melt, compaction and export. Here's the animation showing the GFS weather model temperature forecast maps for the coming week, as provided by  Climate Reanalyzer:

As for sea surface temperature anomalies, here's another comparison with 2012 (left) for August 25th. By now 2012 was really running warm in the Beaufort Sea, but this year isn't much behind, and there's much warmer water on the Atlantic side of the Arctic, just waiting for some more ice being pushed into it. Om nom nom. 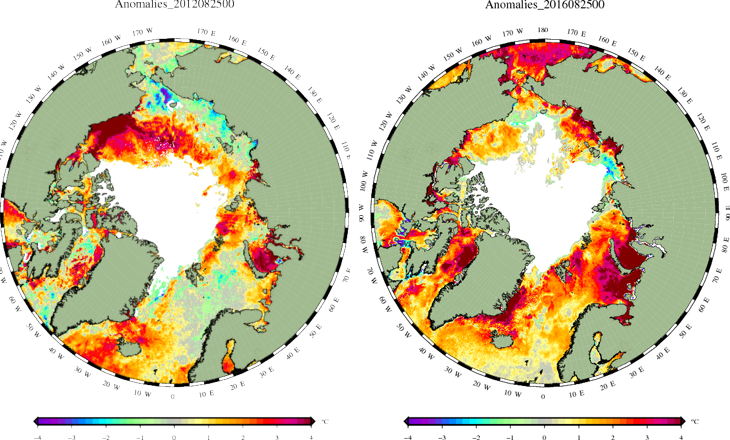 Conclusion
The fact that a melting season can end this way, gives me shivers. As did the start, when after an extremely mild winter and a record low maximum, persistent high pressure opened up much of the Beaufort and Chukchi Seas amazingly early, causing 2016 to lead on practically all extent and area graphs out there, for weeks and months on end.
That much of the ice still manages to hold on, is entirely due to the weak preconditioning phase during May, June and July (see this year's Melting momentum posts). If melt ponding had been anything close to 2010 or 2012, the record would have been completely smashed this year, just as the 2007 record was smashed in 2012.
Yes, you read right: A melting season that saw cloudy conditions dominate during the period when solar radiation matters most, is going to come in second, and we don't even know yet how close it can still get to the 2012 record. We also don't know what the consequences will be for Northern Hemisphere weather or for melting seasons to come. Will this season be followed by a rebound? Or is this just the aperitif for destruction?
We have two exciting weeks ahead of us. And a bit frightening.
Posted by seemorerocks at 10:07