Cruising in the North-West Passage : jolly good fun at the end of time

CNN makes witnessing the demise of the Arctic’s ice and the start of an extinction event look like jolly good fun. 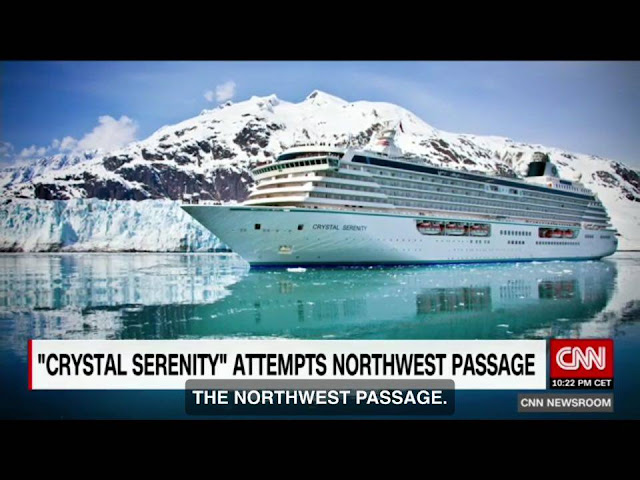 "Cruising can be fun, luxurious or relaxing depending on where you go, but we’re going to tell you about a cruise that’s altogether different..."


No mention of climate change, ice melt or even environmental affects for them.

How you respond to the following item from CNN will largely provide a litmus test as to what sort sort of a human being you are.

At least the following al-Jazeera piece references the problems

The biggest cruise ship to use the Northwest Passage is on a trip around the Arctic Ocean.

1500 people are on board, hoping to see some of the world's most isolated areas.

But there are concerns about people's safety and what that means for the delicate ecosystem.

The Upside of Global Warming: Luxury “Northwest Passage” Cruises for the Filthy Rich

It has been described in the press as “the world’s most dangerous cruise“ and in glossy marketing copy as “the ultimate expedition for the true explorer.” It is a historic voyage, one that marks the opening of one of Earth’s last frontiers.

It is also an abomination—a massive, diesel-burning, waste-dumping, ice-destroying, golf-ball-smacking middle finger to what remains of the planet, courtesy of precisely 1,089 of its richest and most destructive inhabitants. And it’s all made possible by runaway climate change, the existential global crisis that these same people and their ilk have disproportionately helped to create.


MSNBC can at least devote a few paragraphs to this. 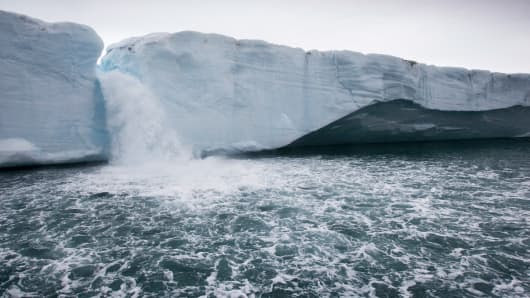 Melting water pours from ice face of Brasvellbreen Icefield on stormy summer morning.
Arctic sea ice is melting at a rate far faster than anyone thought, and it is already wildly, and perhaps permanently, changing the region, and the planet.

Historically, sea ice forms every winter across the top of the planet, and covers much of the Arctic Ocean. Every summer, the ice melts a bit and retreats, only to repeat the cycle again. But since the 1980s, the ice has been retreating further and further overall, contributing to sea level rise, changes to ecosystems, and erosion so severe it is biting off chunks of coastlines in Alaska, Canada and elsewhere.

As 2016 continues apace to be one of the warmest years on record, Arctic sea ice levels appear to be among the lowest on record, said Tom Wagner, program manager for NASA's cryosphere research — a name given to the study of frozen regions of the planet. "It doesn't look like the ice is healing or growing back."

An animation showing the annual retreat of Arctic ice between 1989 and 2015. (Source: NASA)

"By some accounts we have lost more than two-thirds of the ice that used to be back in the 1980s," Wagner said. "This looks to be a very, very long-term trend and we are only going to be losing more ice.

This matters because the "health" of the ice is considered a general indicator of what is going on in the Earth's total climate system.

"This is not something that will affect humanity in the far off future," Wagner said, "loss of this ice is already wildly changing the Arctic," and rippling outward to the rest of the planet.

"The planet is not just changing, it is changed," Wagner said. "And we have to deal with the change that has occurred. The melting of the glaciers in Alaska and Canada and Greenland is already raising sea levels to the point that Miami and New York are experiencing flooding."

A postscript from Kevin Hester -

So let me get this straight.

An ice breaker will plough ahead clearing the way for the modern day Titantic to steam into the fragile sea ice pouring millions of tonnes of hot coolant water back into the arctic waters to speed up the ice melt.

The wake from these boats will make the water choppier and reduce the albedo of the water due to waves.

The exhausts will project heat, carbon and black soot into the air when the soot settles it will reduce the albedo of the ice it lands on.

In the night when no one can see both boats will switch to cheap, high sulphur bunker fuel to reduce costs.

What did I miss?