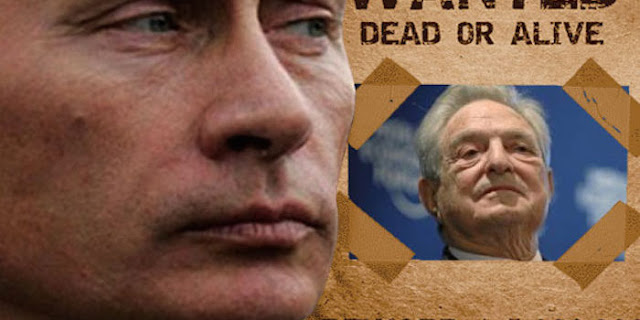 Submitted by Alex Christoforou via The Duran.com,

The recent DC Leaks, of over 2,500 documents from George Soros NGOs, has shed a bright light on how the billionaire uses his vast wealth to create global chaos in an never ending push to deliver his neo-liberal euphoria to the peasant classes.

While Soros has managed to thoroughly destabilise the European Union by promoting mass immigration and open borders, divided the United States by actively funding Black Lives Matters and corrupting the very corruptible US political class, and destroyed Ukraine by pushing for an illegal coup of a democratically elected government using neo-nazi strong men…one country that Soros has not bee able to crack has been The Russian Federation.
Russia’s political pragmatism and humanist value system rooted in a traditional, “nation-state” culture most likely infuriates Soros.
Russia is Soros’ white whale... a creature he has been trying to capture and kill-off for nearly a decade.

Unfortunately for Soros (and fortunately for the entire planet) the Russian government realised the cancerous nature of Soros backed NGOs, and took the proper preventative measures…which in hindsight, and after reviewing the DC Leaks memos, proved to be a very wise move.
On November 30th 2015, ZeroHedge reported,


Russian Prosecutor General’s Office issued a statement in which it recognized George Soros’s Open Society Institute and another affiliated organization as “undesirable groups”, banning Russian citizens and organizations from participation in any of their projects.

–prosecutors said the activities of the Open Society Institute and the Open Society Institute Assistance Foundation were athreat to the foundations of Russia’s Constitutional order and national security. They added that the Justice Ministry would be duly informed about these conclusions and would add the two groups to Russia’s list of undesirable foreign organizations.

According to RT, prosecutors launched a probe into the activities of the two organizations – both sponsored by the well-known US financier George Soros – in July this year, after Russian senators approved the so-called “patriotic stop-list” of 12 groups that required immediate attention over their supposed anti-Russian activities.

The Law on Undesirable Foreign Organizations came into force in early June this year. It requires the Prosecutor General’s Office and the Foreign Ministry to draw up an official list of undesirable foreign organizations and outlaw their activities. Once a group is recognized as undesirable, its assets in Russia must be frozen, its offices closed and the distribution of any of its materials must be banned. That said, it is doubtful that Soros still has any active assets in Russia – his foundation, which emerged in Russia in its early post-USSR years in the mid-1990s, wrapped up active operations in 2003 when Putin cemented his control on power.

The huge document tranche released by DC Leaks shows how dangerous the Open Society and George Soros were to the well being and preservation of the Russian Federation and the Russian culture.


Identify joint priorities for OSF’s Russia activities in the coming year. How can we most effectively collaborate, considering the deteriorating political environment for our partners?

The main revelation of the document minutes comes from the hope that Medvedev’s years as president would provide the NGOs the “opening” they would need to finally break the Russian bear.

That all evaporated in 2012, when Vladimir Putin returned to the President’s office.

The OSF, clearly distraught and disappointed, begins to lay down the groundwork for how to challenge the Putin administration, in light of his very different approach to dealing with NGOs like the Open Society Foundation.


The human rights context has greatly changed from 2006 to 2012: the Medvedev period allowed for a number of improvements and significant openings for NGOs. Amendments to the NGO law in 2006 led to campaigning on behalf of NGOs; many of our grantees benefited during this period. Surkov established ties with many groups that were willing to cooperate with the state and our partners served as experts in key processes like police reform. A space was created for modernization and for the inclusion of civil society during Medvedev’s term. However, pressure has come back very quickly in the short time that Putin has been back in power.

A major turning point for NGO operation in Russia came with the botched Russian “Maidan like” protests, which were promptly dismantled before any damage could be inflicted.


The Russian protests deeply affected the life of NGOs. The state had been providing money for self-organization, thinking this would defuse the possibility of large-scale opposition. But by encouraging self-organization, they had opened up a Pandora’s Box. People became active and began to feel that it was possible to change something; the door was opened for self-mobilization.

The state has responded with repression and political prisoners, in order to instill fear in the population. The state is also working to undermine social support for the protests. Its support of socially-oriented (“good”) NGOs is a way to divide the community, while the foreign agents law frames the protests as foreign money undermining Russia.

Why the fascination with Russia? Why is it important for OSF to focus on Russia? With Russia comes immense wealth and tremendous geo-political power.

The document details in an extensive bullet point list, “what must be done” to destabilize Russia, focusing on many recurrent neo-liberal themes that Soros uses to infect host nations and overturn governments…

Prisons
– Lots of funding is going to monitoring; where is our money best placed?
– ONKs don’t have sufficient $ for travel and legal representation


Russia today faces a regrettable backsliding into authoritarian practice. Confronted with serious domestic challenges, the regime has become more insular and isolationist, seeking to solidify its base. The progressively draconian laws promulgated since Putin’s return to the presidency have placed all foreign- funded organizations under threat of isolation and disrepute. Despite these decidedly challenging conditions, it is essential that we continue to engage Russia, both to preserve its extant democratic spaces, and to ensure that Russian voices do not go dark on the broader global stage.


Amid the grim landscape, there nonetheless remain apertures for the Russia Project’s intervention. Exploiting all available opportunities, we will undertake the following three concepts, which we deem vital in the current climate:

1)  We will mitigate the negative impact of new laws via domestic and international advocacy. Key allies in this regard are the growing numbers of diverse Russian citizens opposing the country’s regression, along with the sizeable community of Russian legal experts with an in-depth knowledge of NGO law and a strong motivation to help the sector continue its activities.

2)  We will integrate Russian voices into the global exchange of ideas. Given that Russian intellectuals, practitioners and activists are increasingly sidelined domestically, and academics are often isolated from the international community, we will support venues for inserting diverse, critical Russian thinking into the global discourse. Such opportunities allow Russian actors to enter into mutually beneficial collaborations on topics ranging from migration to digital activism, thus maintaining their relevance and reducing their provincialization.

3)  We aim to mainstream the rights and dignity of one of Russia’s most marginalized populations: LGBT individuals. The RP’s diverse network of partners provides an opportunity to build a broader base of civil society allies at a time when the LGBT community is under profound threat. We hope to see a more balanced discourse on LGBT rights among the Russian public, as well as a strong cohort of mainstream independent organizations actively incorporating LGBT interests into their work.

Social mobilisation and the funding of alternative media networks, to promote social discourse and dissatisfaction, are common tactics that Soros NGOs uses to build up towards a revolution.


Along with these initiatives, we remain committed to supporting three primary fields: (a) access to justice and legal empowerment of marginalized groups, (b) access to independent information and alternative media, and (c) platforms for critical debate, discussion, and social mobilization. The RP plans to provide core support to our trusted partners in each of these fields, investing in their growth and development, and remaining flexible about the funding arrangements necessary to allow them to continue their essential work. We also seek to strengthen their legitimacy and financial sustainability, in order to build a more transparent, effective, and organizationally efficient third sector.

Russia is currently in a gradual, arbitrary, and haphazard process of becoming more closed. Amid this background, the RP’s cardinal role is to create a dense and wide-ranging field of independent civil society actors, who can in the best case help set the agenda for a more open and democratic future in Russia, and in the worst case survive the effects of new draconian legislation.

Engaging with Russian diaspora who oppose the current government, and mobilising the LGBT community through mass media propaganda, are recurrent themes in the Soros document.
The media focus on LGBT rights in the run up to the Sochi winter olympics was an opportunity not to be missed by Soros.


In the short to mid-term, the RP aims to engender broader civil society support for this highly marginalized group. Even though the “propaganda of homosexuality” law has gained unprecedented international attention in the lead-up to the Winter Olympics in Sochi, the voices of Russian activists are barely being heard over larger international LGBT organizations. We want to make sure that our Russian partners have a leading role in shaping the strategy of the international movement, that planned campaigns have a domestic rather than just an international focus, and that the momentum gathering around Sochi does not dissipate immediately after the Olympics end.

Our comparative advantage lies in the deep and wide networks that we have fostered these past years. A strategic use of these networks will maximize the long-term impact of the work that LGBT rights organizations are doing. LGBT rights groups in Russia are professional and effective, yet they lack the capacity to reach far beyond their immediate communities and galvanize other civil society players necessary for their long-term success.

Destabilisation of a country the size of Russia does not come without a significant price tag, for which George Soros seems more than ready to pony up…

Given the large number of grants in the RP portfolio, we see a need for additional staffing in order to implement our strategic priorities and effectively monitor our activities. However, as a number of programs in the Eurasia region are being restructured, we are awaiting the results of this transition before making any substantive recommendations.

Their can be no doubt that the 2014-2017 plan outlined by Soros NGOs, which even envisioned staff growth and Eurasian region restructuring, has hit a major speed bump with the 2015 law that saw these divisive forces operating within Russian finally get booted out of the country.
The complete PDF document can be found here: -Russia-Russia Project Revised 2014 2017 Strategy.pdf

Posted by seemorerocks at 14:01