Jeremy Corbyn called for Nato to be closed down and members to 'give up, go home and go away' 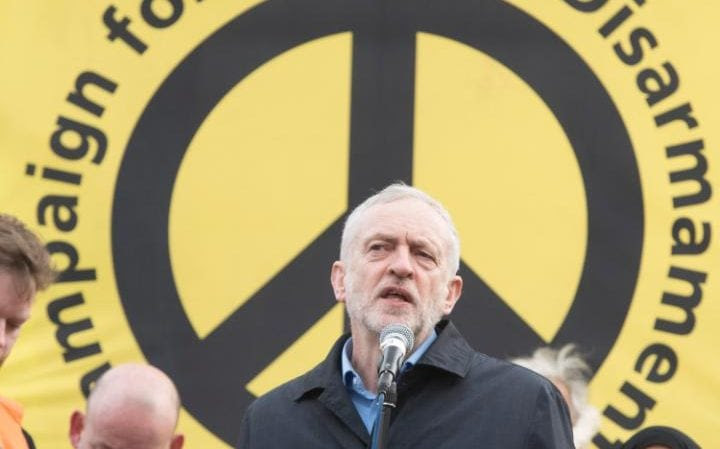 Jeremy Corbyn has called for Nato to be "closed down", it emerged today as defence chiefs warned his comments about the organisation are "weakening western civilisation”.

In footage uncovered by the Telegraph the Labour leader said the military alliance was an "engine for the delivery of oil to the oil companies" and called for it to "give up, go home and go away."


Mr Corbyn on Thursday was criticised after he refused to say whether he would defend a Nato ally if it were invaded by Russia.

Military chiefs said that his comments were "extremely harmful" and warned the public would find his views "disgusting".

In September 2014, Mr Corbyn was filmed declaring: “1990 should have been the time for Nato to shut up shop, give up, go home and go away. Why don’t we turn it around, and close down Nato?

“Nato is an engine for the delivery of oil to the oil companies and the major nations of this world, make no illusions about that.”

But he refused to give concrete assurance that he would do so were he prime minister. Instead he said: “I would want to avoid us getting involved military, by building up democratic relationships."

When pushed on whether he would sign off on the UK going to the aid of a Nato ally, he said: "I don't wish to go to war. What I want to do is achieve a world where we don't need to go to war, where there is no need for it. That can be done."

Mr Rasmussen told the Telegraph: "I am very concerned about his unwillingness to say clearly that Nato of course will defend any ally if they are attacked. Solidarity within the defence alliance is Nato’s raison d’être.

"In line with Mr Trump in the United States, Mr Corbyn now raises doubt about this commitment to defend friends and allies. Thus they are tempting President Putin to aggression and they are weakening Nato and the entire Western civilisation.”

Mr Corbyn's comments come two years after the 28-member alliance created a rapid-reaction force to protect the most vulnerable Nato members against a confrontation with Russia.

Lord George Robertson in 2013
Lord George Robertson said the public will be 'dismayed and disgusted' after Jeremy Corbyn's comments on Nato CREDIT: GETTY IMAGES
Lord Roberson, the former Labour defence secretary and Secretary General of Nato, said: "It beggars belief that the leader of the party most responsible for the collective security pact of Nato should be so reckless as to undermine it by refusing to say he would come to the aid of an ally.

"Even in its darkest, daftest days in the past the Labour Party stuck to its commitment to Nato and to the defence of any ally attacked.

"The public will be dismayed and disgusted by what appears to be an abdication of Britain's responsibility in a dangerous world. "

John Woodcok, the Labour MP for Barrow and Furness, said Mr Corbyn's views on Nato made him feel "deeply ashamed" and said his stance was a "stain on the memory" of the former Labour prime minister Clement Attlee.

Jeremy Corbyn’s refusal to say whether he would defend Britain’s Nato allies plays into the hands of Vladimir Putin and shows little understanding of the threat from Russia, a prominent Estonian MP has said.

The 1.3m population Baltic nation is on the front line of Nato’s standoff with Moscow, and its armed forces are dwarfed by Russian forces just across the border. Britain last month announced 500 troops would be sent to the country as part of a Nato move to bolster its presence in the country.

Marko Mikhelson said Mr Corbyn’s stance “reflects little understanding of the real true challenge for not only Nato, but also for the UK".

He said if Mr Corbyn wanted normal relations with Russia, he would first have to be part of Nato’s deterrence.

“Russia is very much after to weaken Western alliances, both EU and Nato and these kinds of remarks unfortunately play into the hands of those who would like to see Nato weak and disintegrated.

“Its one thing when you [make these remarks] in opposition, or seeking votes, but in real terms when you face the national security interests of your own country, then you will realise that Nato is the best answer today to keep countries safe and sound.”