The Chinese take-over of NZ dairy

I think this article largely misses the point but,nevertheless, there’s much worth reading. 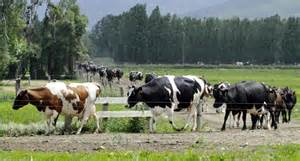 Here’s the question: Did large Chinese companies, in league with their government, deliberately intend to harm the New Zealand and Australian economies by stockpiling products, in order to then purchase devalued land and commodities at a cut rate?

For several years, there have been whispers in New Zealand that farmers are becoming “tenants in their own land.” As Chinese companies move in more and more, carving out and buying for themselves swathes of New Zealand farmland (and Australian, too), those concerns are growing louder.

We New Zealanders are few in number but have slogged it out over the past century and a half to become the largest dairy exporter on Earth—sending out 95 percent of our product. Our dairy industry is critical to our economy. The livelihood of our country depends, to a great deal, on how well our farms do. Judging by what has been happening of late, that’s not so well at all.

New Zealand’s biggest dairy customer by far has been China. And one of the biggest-selling products has been powdered milk. In short, Kiwis noticed hoards of powdered milk flying off shelves to China, and eagerly settled in for (what we hoped would be) a long-lasting boom in the dairy sector. Trouble is, China was merely stockpiling the product en masse (to the tune of an estimated 300,000 tons)—and now no longer needs to keep buying. This has left New Zealand farms, set up for a booming industry, hanging—with 85 percent of New Zealand farms now running at a loss. Over the course of the past two years, farmers have had NZ$7 billion (US$5 billion) disappear from collective revenue. Statistically, these dairy farmers are at a debt of around NZ$10,000 per cow. If you’re looking to buy a dairy cow in New Zealand, you’ll expect to pay roughly NZ$1,000.

Statistically, that cow then immediately becomes worth NZ$9,000 less than nothing. Multiply that number into the average New Zealand farm size of around 400 cattle, and you have a disastrous situation, leading not only to fears for the economy but also fears of increased suicide risk for New Zealand’s farmers. As a result, many farmers are looking to sell their land. And who could blame them?
But the problems do not stop here. As a result of this economic downturn, New Zealand farms have been severely devalued—something that, over the last five years especially, Chinese investors have conveniently had a vested interest in.

For several years, there have been whispers in New Zealand that farmers are becoming “tenants in their own land.” As Chinese companies move in more and more, carving out and buying for themselves swathes of New Zealand farmland (and Australian, too), those concerns are growing louder. Some have criticized these voices for being “racist”—stating that China is only ranked fifth on the list of foreign countries holding the most New Zealand land. That is true; however, over the past few years it has been China showing by far the biggest increase in land purchases. Hence the cause for concern.

To its credit, the New Zealand government recently blocked the Chinese Shanghai Pengxin firm from purchasing the 34,100-acre Lochinver farm—although that move left many looking for the payout disgruntled. Shanghai Pengxin also pulled the plug on another farm purchase of 8,150 acres.

Add to that New Zealand’s biggest meat cooperative, Silver Fern Farms, which voted just last year to sell half the company to the Chinese-owned Bright Food Group. While the vote was successful, the deal is still awaiting approval by the Overseas Investment Office. All told, China has a current “investment” in New Zealand of NZ$6.6 billion (US$4.7 billion). And the same problem of mass purchasing by Chinese investors has been happening to Australian farms, seaports and more—read about these here.

Here’s the question: Did large Chinese companies, in league with their government, deliberately intend to harm the New Zealand and Australian economies by stockpiling products, in order to then purchase devalued land and commodities at a cut rate?

But wait, you say—these purchases are being made by Chinese investors, Chinese firms that are independent of the Chinese government. Well, not necessarily, as we wrote in 2013:

Unlike the situation in the U.S., the line in China between government and business is gray at best and often totally absent. In 2011, for example, 43 percent of all profits generated by China came from firms that the government had a controlling interest in. Even in cases when there is separation in ownership, Chinese companies and individuals are reluctant to flout Beijing’s authority and guidance. For these reasons, most takeovers by Chinese firms equate to a concrete increase in the Chinese government’s power.

That increase in China’s power over the last several decades has truly been astonishing—the nation becoming a veritable world superpower from a mere pauper state not so long ago. And it is well on the road to building a fully-fledged empire.

China’s building of artificial islands in the disputed South China Sea has been some of its most blatant efforts in building an empire. Undeterred by the recent official rejection by The Hague to China’s claims of the massive body of water, the giant nation continues to dredge up the seabed in order to create militarized “islands” replete with military defenses, bunkers and airstrips.

New Zealand Defense Minister Gerry Brownlee recently made some troubling statements about China’s ambitions in the South China Sea (emphasis added):
There’s no doubt there’s a degree of asserting what are believed to be long-held rights [by China over the South China Sea], but I think you’ve also got to see that some of those claims are, in history, no greater than the claims that Britain might have had over all of Australia, or all of New Zealand. It’s hard to imagine, though, that China will want to have any particular conflict over this issue.

No problem, China, you have just as much right to the South China Sea—or anything in the South Pacific, you might add—as we English had over New Zealand and Australia. But don’t be worried, we are reassured. Because it is “hard to imagine” China resorting to military measures.

What if things do get nasty? New Zealand’s armed forces aren’t exactly well prepared to defend our assets. Take the Royal New Zealand Air Force: over 1,000 aircraft at the end of World War II—now 51. Thanks to the Labour government of 1999–2008, there are no more air combat planes (only trainers, transports, patrol planes and helicopters). All are propeller-driven (apart from two converted airliners). Perhaps we can fall back on our 11 Navy ships (down from over 60 at the end of World War II). Too bad only two of them are designated combat boats. But then again, what’s the point in even wasting money on a military to defend a nation when your businessmen just sell away the land on the negotiating table? It’s true that New Zealand’s armed forces were set up to be used in conjunction with Australia’s; still, the above is a pretty shocking showing for a somewhat isolated island nation the size of New Zealand.

China’s big regional influence hasn’t been limited just to the southern Asian portion of the globe, though. It has been pursuing major investments in the United States and the African continent as well. Its flowering relationship with Vladimir Putin’s Russia is cementing together a massive Asian superpower to counter the fast-fading United States of America, effectively impotent British Commonwealth, and the German-steered European bloc.

China is in empire-building mode. For a country in such a power-position, and with such a massive population, the desire for more resources and more land should not be a surprise. If it has done this much on a one-child policy, one can only imagine what’s next—especially considering that policy was phased out last year. China is becoming a nation no longer hungry for just food products but for land as well. I don’t know what the Chinese call it, but I know the Germans called it Lebensraum.

Actually, New Zealand has been witnessing tremendous growth in Asian immigration. Just over one in eight people in New Zealand are Asian (mostly from China)—and they are set to soon overtake the number of native Maori in the land. In fact, in a number of New Zealand territorial authorities, the Asian population is projected to be near-or-over the 50 percent mark by 2038. That’s likely to mean a sea change in New Zealand language as well. Perhaps before long we will see Mandarin as one of the official New Zealand languages, along with English, Maori and New Zealand Sign Language. And—surprise, surprise—the Chinese government is currently funding our schools to teach Mandarin. The Confucius Institute, supported by the Chinese government, has said that learning a second language should be compulsory in New Zealand. I don’t suppose they were insinuating German or French? One of the critics wrote: “I have no problem with New Zealand children learning another language … I do have a problem with any other country’s government saying what New Zealand kids should or should not do in our schools and stumping up with the cash uninvited.”

The near future—within the lives of this very generation—portends a very different New Zealand on the horizon. New Zealand is being swallowed up by current land sales, future population rates, and even by debt—to the tune of nearly half a trillion New Zealand dollars. What happens when the debt collector decides not to play nice? Who owns New Zealand debt anyway? You guessed it—much of it is owned by China. China has been buying huge amounts of New Zealand government debt. Debt is one of the greatest bargaining chips; New Zealand could be forced into a position of selling even more swathes of land as payment for money owed, or perhaps giving up other assets, such as seaports or airports.

One thing is for sure—we’re certainly not in a military position to say “No.”

Why Are We in Such a Mess?

Why is New Zealand in such a predicament? As an extension of that, why does the entire British Commonwealth seem to be doing so poorly, along with its (once) stoic ally, the United States? Why are they all running up oceans of debt? Why are they losing sovereign territory? Why do they allow foreign nations to walk all over them?