None of this should be news by now

by Kurt Nimmo at Another Day in the Empire 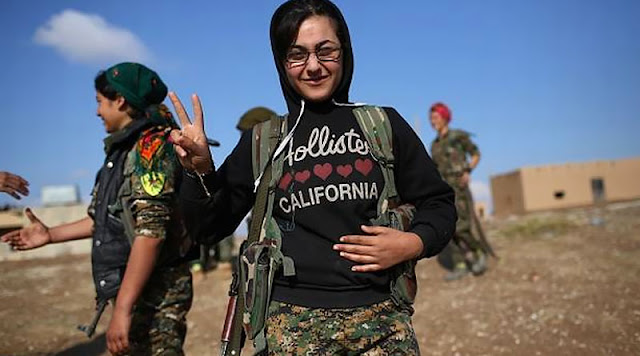 A couple hundred vehicles of Islamic State (ISIS) fighters were allowed to leave the northern Syrian city of Manbij as U.S.-backed forces seized the town in recent days because the militants had civilians with them, according to a U.S. military official.

The decision to allow the terrorists to flee to Turkey was handed down by the Pentagon. The explanation given was they didn’t want to hurt civilians who were actually hostages:

Col. Chris Garver, a spokesman for the U.S.-led coalition fighting ISIS, told Pentagon reporters that the decision to let the convoy leave the city was made by commanders of the Syrian Democratic Forces. He said there were civilians in each of the vehicles, and the military wanted to avoid casualties. He added that he doesn’t know how many of the civilians may have been in the cars voluntarily, but some were likely hostages.

Fox reports it is not clear if the “militants” departed under a pre-arranged agreement between the Syrian Democratic Forces (SDF) and the Islamic State.

In May US special operations forces were photographed fighting alongside SDF mercenaries near the front lines north of Raqaa, the so-called capitol of the Islamic State in Syria.

CNN, at one time the home of the Army’s Fourth Psychological Operations Group, tried to make excuses:

Questions regarding the photos were also raised due to the fact that the U.S. special operations forces appear to be wearing the insignia of the YPG, the main Kurdish force inside Syria, the optics of which could present all sorts of difficulties in a multiethnic region riven with sectarian tensions.

The Pentagon backs the YPG, the Kurdish People’s Protection Units, too, but never mind.

It’s all part of the war on terror, designed to last forever.

It’s all reminiscent of the Kunduz airlift.

In November, 2001, as the United States invaded Afghanistan and closed in on al-Qaeda, thousands of top commanders and members of the Taliban and al-Qaeda, their Pakistani advisers including Pakistani Inter-Services Intelligence agents and army personnel, were airlifted from Kunduz.

It was said at the time the US missed an opportunity to kill some bad buys, never mind the airlift was conducted by the Pakistan Air Force and orchestrated by the Inter-Services Intelligence, which was at the time cooperating closely with the CIA.

Visit Kurt Nimmo’s new blog Another Day in the Empire