I would say this happened with the collapse in the price of oil was intended to give Venezuela trouble. US economic and political warfare agaisnt Venezuela combined with collapsing world economy that is hitting oil-producing nations pretty hard

Total Societal Collapse: What the Media Isn’t Telling You About Venezuela 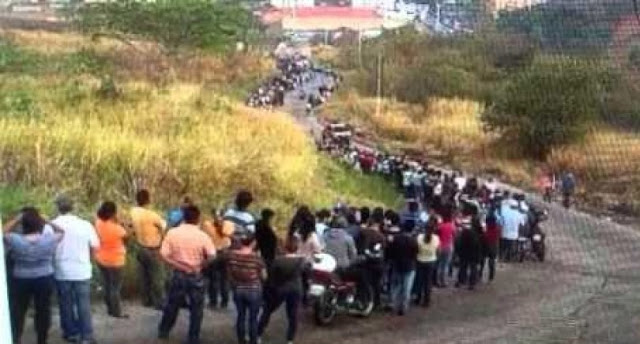 (ANTIMEDIA) Venezuela — Life in Venezuela now consists of empty grocery stores, record rates of violent crime, and widespread shortages of just about everything. The economic and political conditions have been deteriorating for years, but recent stories coming from this once-rich nation are astonishing. Bars have run outof beer, McDonald’s can’t get buns for their Big Macs, and rolling blackouts are a regular occurrence. The average person spends over 35 hours a month waiting in line to buy their rationed goods, and even basics like toilet paper and toothpaste are strictly regulated.

The fiasco began when the price of oil collapsed and sent Venezuelan finances into chaos. The oil-dependentnation, despite its imposing government policies, couldn’t prevent the fallout. The current problems are further compounded by rampant corruption throughout the Venezuelan government. The likelihood of a peaceful resolution is decreasing by the day, and political dissents are likely to be met with brutal crackdowns. The desperation of the masses could explode violently under the right circumstances, and there are few things more dangerous to a nation than a hungry population.

The food lines seen throughout Venezuela are reminiscent of the Great Depression. Thousands fill the sidewalks and wait for hours to get their hands on basic staples. Tensions have risen so dramatically that several people have been killed in recent food riots and lootings. Dogs, cats, and birds are finding themselves on the menu, and a group even broke into the Caracas’ Caricuao Zoo to slaughter the animals for meat.

In an effort to relieve some of the pressure, President Nicolas Maduro briefly opened the border with Colombia, prompting over one hundred thousand people to pour across in search of products that have gone extinct in their own country.

The border was originally sealed back in 2014 in an attempt to prevent the smuggling of food and people. The uncertainty of what the future holds has forced people to spend what little savings they have onsecuring enough food to get by. Without access to the resources needed for production and distribution, commerce has come to a complete standstill, and food shortages aren’t the only consequence.

The Venezuelan healthcare system, once a symbol of socialism’s success, has been crippled by vast medical supply shortages. Gloves, soap, and antibiotics have all vanished, with power often only working one or two days a week. The economic woes have created a full-blown public health emergency. Malnutrition combined with doctors’ inability to treat patients effectively has led to outbreaks of diseases like tuberculosis and malaria. With such extremely limited resources, many patients are falling through the cracks. Even simple illnesses are going untreated, leading to dangerous complications.

“When people are literally going hungry and children are dying at birth because there aren’t the right medical supplies … when basic things like Tylenol aren’t even available … this causes a huge amount of angst in the population.”
Yet another disturbing pattern has developed since traditional forms of birth control have become unavailable in stores. Record numbers of women are resorting to sterilization to prevent unplanned pregnancies. Local clinics have hundreds on the waiting lists for appointments. Aside from the financial burden, the possibility of watching their children starve is too much to handle and has prompted many women to take drastic action. This means the current economic depression is going to have long-term effects on generations to come.

Life in Venezuela is now built around waiting in lines. As much as the lines have become the key to survival, they are also hotbeds for violence. Crimes are often committed in broad daylight, with assailants meeting little resistance. For other people in line, the risk of leaving their spot to intervene is just too high. Their dependence on government has literally robbed them of their ability to help others in need.

“These days, you have to put the line above everything,” said pharmacist Haide Mendoza, who witnessed a murder in the line at her store, CBS News reported.
The hyperinflation currently affecting the Venezuelan currency, the bolivar, is undermining every function of the government and economy. The inflation rate is now the highest in the world and is expected to hit 1,600% by next year. Despite the government raising the minimum wage three times to appease workers, the move has only fueled a rise in prices. In a highly controversial move, the government imposed forced labor policies to keep food production going. Maduro’s emergency decree promises severe punishments for those who refuse to work in the fields without pay. The social contract appears to have no end when it comes to the ‘greater good.’

It’s always interesting to see the selective coverage the media rolls out, but the struggle of people on the ground is getting too severe for them to ignore. The same policies increasingly pushed by Western governments are on display in Venezuela as the country descends into chaos.

In the coming months, this story of societal collapse will likely force its way into the mainstream. Food shelves haven’t been restocked, the police haven’t restored order, and the food lines continue to grow. The faith in the State that was the cornerstone of stability under Hugo Chavez has been completely eroded. If oil prices surge, it may provide some relief, but the symptoms plaguing their economy are past the point of no return.  The only way to remedy this type of repression is to hold the criminal government officials in power responsible for their contributions to the crisis.
This article (Total Societal Collapse: What the Media Isn’t Telling You About Venezuela) by Shaun Bradley is free and open source. You have permission to republish this article under a Creative Commons license with attribution to Shaun Bradley and theAntiMedia.org. Anti-Media Radio airs weeknights at 11 pm Eastern/8 pm Pacific. If you spot a typo, please email the error and name of the article to edits@theantimedia.org.