Hot spots in the Tasman Sea

I don’t know how to react to this – whether to laugh or cry. Many,many months after I started to keep an eye on this and to comment on it scientists seem have just discovered that the Tasman Sea is warmer than normal.

The ocean between New Zealand and Australia is one of the fastest-warming ocean regions on the planet, heating up at four times the global average. 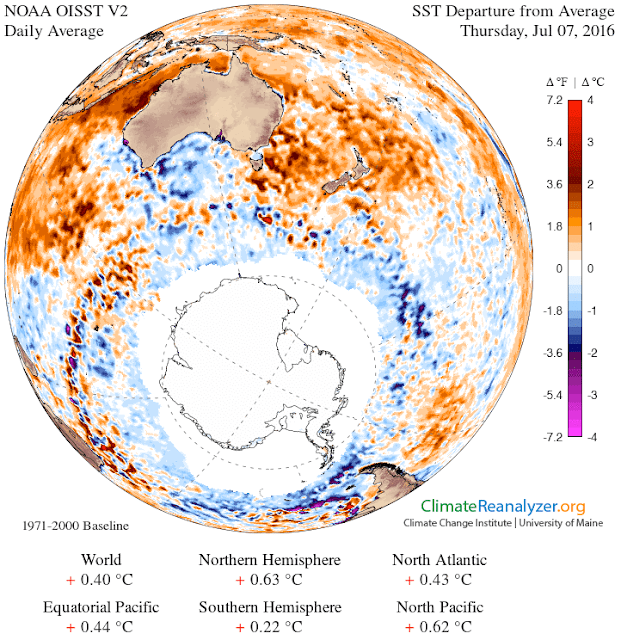 Now scientists are working to understand what this accelerated warming in what's called the East Australia Current means for the coastal environments of both countries and their resident marine species.
Oceanographer Moninya Roughan, a visiting Seelye Fellow at the University of Auckland, is researching the effect of one of the strongest influences on ocean conditions in the region, and will be giving a public talk on her work this week.
"New Zealand and Australia sit at the tail pipe of the East Australia Current where global ocean circulation affects the coastlines of both countries so we need a much better understanding of its effects," she said. 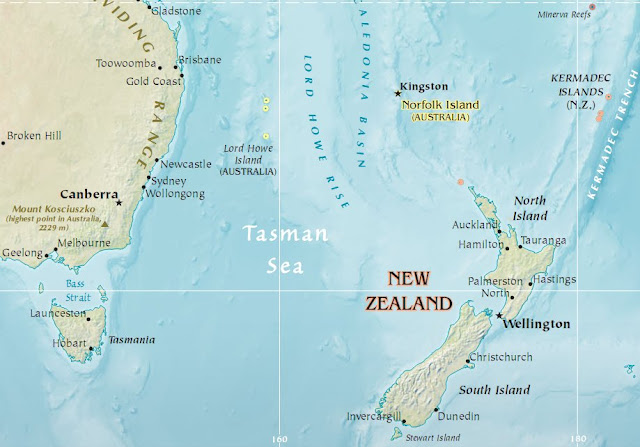 Roughan, from UNSW Australia, leads a comprehensive ocean observation system comprising a network of moorings, HF Radar and an underwater autonomous "glider" that transmits data in almost real time by satellite.
The data should help scientists better understand what drives change in this part of the ocean.
Measurements over the past 70 years show that over the past century, surface temperatures off the coast of Tasmania have risen as much as 2.28degC.
One of the key species that may be affected by environmental changes are tiny lobster larvae that spend a year adrift at sea before returning to the coast to develop into juveniles.
With many not making it back from the journey, the lucrative spiny lobster fishery is facing decline and scientists suspect it is due to changing ocean conditions.
The lobster project, a collaboration between UNSW, Associate Professor Andrew Jeffs from the University of Auckland's Institute of Marine Science and NSW Fisheries, involves observing lobster larvae swimming in a special tank with a continuous flow of seawater to mimic natural conditions.
So far the research has established that while ocean warming may favour baby lobster and help them develop, the strengthening currents transport them further south than normal.
NZ Herald

Warming in the Tasman Sea a global warming hot spot

Oceanographers have identified a series of ocean hotspots around the world generated by strengthening wind systems that have driven oceanic currents, including the East Australian Current, polewards beyond their known boundaries.

The hotspots have formed alongside ocean currents that wash the east coast of the major continents and their warming proceeds at a rate far exceeding the average rate of ocean surface warming, according to an international science team whose work is published in the journal Nature Climate Change today.
Paper co-author, CSIRO's Dr Wenju Cai, said that while the finding has local ecological implications in the region surrounding the hotspots, the major influence is upon the ocean's ability to take up heat and carbon from the atmosphere.

In Australia's case, scientists report intensifying east-west winds at high latitudes (45º-55ºS) pushing southward and speeding up the gyre or swirl of currents circulating in the South Pacific, extending from South America to the Australian coast. The resulting changes in ocean circulation patterns have pushed the East Australian Current around 350 kilometres further south, with temperatures east of Tasmania as much as two degrees warmer than they were 60 years ago. "We would expect natural change in the oceans over decades or centuries but change with such elevated sea surface temperatures in a growing number of locations and in a synchronised manner was definitely not expected," said CSIRO's Dr Wenju Cai.

"Detecting these changes has been hindered by limited observations but with a combination of multi-national ocean watch systems and computer simulations we have been able to reconstruct an ocean history in which warming over the past century is 2-3 times faster than the global average ocean warming rate," says Dr Cai, a climate scientist at CSIRO's Wealth from Oceans Research Flagship.

The changes are characterised by a combination of currents pushing nearer to the polar regions and intensify with systematic changes of wind over both hemispheres, attributed to increasing greenhouse gases.

Dr Cai said the increase of carbon dioxide and other greenhouse gases in the atmosphere has been the major driver of the surface warming of the Earth over the 20th century. This is projected to continue.

He said the research points to the need for a long-term monitoring network of the western boundary currents. In March next year, Australian scientists plan to deploy a series of moored ocean sensors across the East Australian Current to observe change season-to-season and year-to-year.