Turkey's blackmail of the EU

More Fears for EU-Turkey Migration Deal as Ankara Hits Out at 'One-Way Road'
There is more concern over the EU-Turkey migration deal, with Turkish Prime Minister Binali Yildirim accusing the EU of not holding up its end to the deal, labeling the situation a "one-way road." 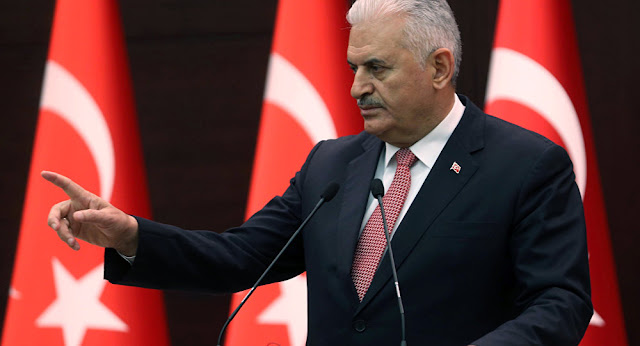 Amid ongoing tension between Ankara and Brussels over the migration agreement, Yildirim took aim at Brussels over a series of alleged failures to meet earlier promises made to Turkish authorities.

"We signed an agreement with the EU and it has not been implemented," he was quoted as saying by the Times.
"Europe has only received 1,000 Syrians, when they should have taken 100,000," Yildirim dded.

Ceylan YeginsuVerified account‏@CeylanWrites
Turkey has taken in nearly 3 million refugees & spent nearly $10 billion. But aid groups say it is not a safe country for refugees @WHSummit
1:42 AM - 24 May 2016
​The Turkish prime minister also took aim at the EU over its delay in paying aid money pledged to Turkey to assist the country throughout the migration crisis.
"€3 billion (US$3.38 billion) of aid was committed to us and we have not heard anything about this. Nor have we heard anything about the visa exemption. This is unfair — it is a one-way road," he said.
Fears Over Visa Issue
The issue of the visa liberalization for Turks within the EU is posing as a key issue that could eventually scupper the migration deal.
Turkey has accused the EU of backtracking on the promise of visa-free travel, warning that if such a measure isn't introduced by October, then the migration agreement could be rescinded.

Tim Marshall‏@Itwitius
Turkey has given a deadline of Oct for EU to grant visa free travel or it will end co-operation on helping EU manage refugee crisis.
2:08 AM - 16 Aug 2016
​"If our demands our not satisfied then the readmissions will no longer be possible," Turkish President Recep Tayyip Erdogan said earlier this month.
"There are currently three million refugees in Turkey, and the only concern of EU member states is that those refugees do not reach their territories."

Kati Piri‏@KatiPiri
Kati Piri Retweeted
EU stresses importance for the rule of law and fundamental freedoms to prevail in #Turkey after failed coup attempt. https://twitter.com/eu_eeas/status/754272043139555328 …
Kati Piri added,
This Tweet is unavailable.
11:14 PM - 16 Jul 2016
​The EU has rejected the criticism however, saying that visa liberalization for Turkish citizens will be granted once Turkey meets a series of guidelines, which includes the reformation of the country's anti-terror laws.
Following Turkey's failed coup in July, Ankara has refused to review the anti-terror laws, setting up a standoff between Turkey and the EU over the issue.

Turkish Deleg. to EUVerified account‏@AvbirDT
Despite speculations about #Turkey-EU deal in the aftermath of failed coup, TR Coast Guard continues to stem irregular migration in Aegean
4:05 AM - 13 Aug 2016
​While the EU-Turkey migration has largely been credited with helping to stop the flow of refugees and migration across the Aegean Sea from Turkey to Greece, officials have noted an increase in arrivals in recent months.
There are fears that a diplomatic breakdown could scupper the deal, which many believe would be disastrous for the EU as it could unleash a fresh migration crisis for the beleaguered bloc