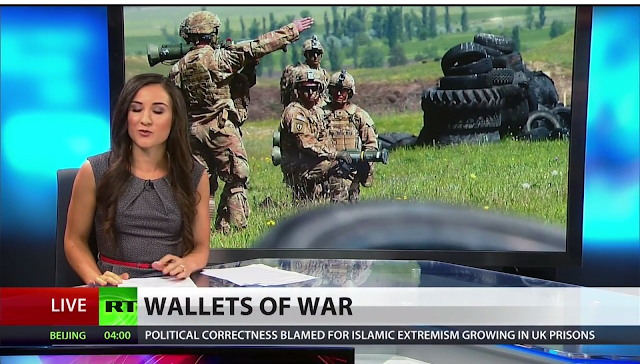 Portraying Russia as a threat to the United States is good for business, if you’re in the business of war that is. High-ranking employees at several defense contracting companies have made comments playing up the threat of a “resurgent Russia” in a likely attempt to boost US military spending and their own bottom line.

Follow the Money Trail for Source of 'Russian Threat' Paranoia 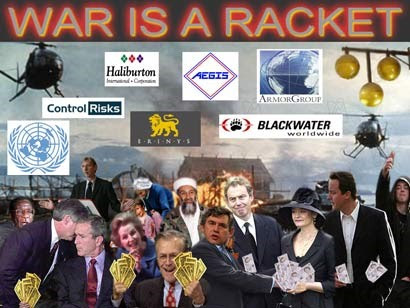 You’d have to have been locked in a wardrobe if you live in the West not to have heard ominous phrases like “The Russian threat”, “Russian aggression in Europe” and “Russia set to invade Poland/Estonia/ Ukraine/Finland.”

Certain people are trying to scare us witless about Russia and the “threat” the country apparently poses. The hysteria reminds one to the build up to the Iraq war, when we were warned every day about the “threat” of Saddam’s deadly WMDs, which - surprise, surprise - turned out not to exist.

Now, we can talk for hours about grand, highfalutin theories in the field of geopolitics and international relations in attempts to explain why this is happening.

But “follow the money” trail is all we really have to do. Ask yourself who benefits financially from all this scaremongering and then you’ll understand it.

This week, The Intercept revealed how US defense contractors have been telling investors that the so-called “Russian threat” was good for business.

There was a similarly upbeat message from Stuart Bradie, chief executive of CBR, who talked of the "opportunities" the current situation presents.
The case for higher defense spending to counter the “Russian threat” has been made by a series of think-tanks. And guess what? The most hawkish of these lobbyists - sorry, “think tanks” - receive sizable funding from US defense contractors!

The Intercept cites the examples of the Lexington Institute and the Atlantic Council.

But there’s plenty others too. Back in February, I wrote about a “non-partisan” US policy institute called the Center for European Policy Analysis. The CEPA issued a paper attacking Russian media outlet Sputnik for giving a voice to "anti-establishment protest politicians" who were critical of NATO.

And who funds the “non-partisan” CEPA? Recent donors include the US Department of Defense, Boeing, Raytheon Company, Textron Systems, Sikorsky Aircraft, Bell Helicopter and the Lockheed Martin Corporation.

The US creates chaos, then goes in to sell countries in the region the latest military hardware to “protect” them from the chaos. It’s quite a racket and clearly modeled on the extortion schemes of the Mafia. Countries that don’t want to pay up, like Yugoslavia in 1990s, are likely to get bombed.

Consider how the crisis in Ukraine started. The US spent billions of dollars in a“regime change” op to topple the democratically elected government of Viktor Yanukovych and replace it with a pro-US puppet administration. We even heard the State Department’s Victoria Nuland - after she had handed out cookies to anti-government protestors in the Maidan - discussing who should and shouldn’t be in the new “democratic” Ukrainian government, with US Ambassador Geoffrey Pyatt.


When the people of Crimea predictably said “Nyet” to the State Department’s operation, and voted overwhelmingly to rejoin Russia in a referendum, Russia was cast as the “aggressor” who had “invaded” the Ukraine. The US would have known that its regime change op in Ukraine would cause chaos and increase tensions with Russia. And that’s exactly why they did it!

To counter the new Russian “threat” not just to “democratic” Ukraine, but to other countries in eastern Europe, we’re told we need a big increase in NATO “defense” spending. And who does that benefit? Why, US defense contractors!

In November 2014, “threatened” Estonia purchased 80 Javelin missiles from the US at a cost of 40m Euros. In February, we heard that the country would be spending 818m euro on new weapons and equipment by 2020.

By any objective assessment it's NATO - not Russia - with its build up of arms and soldiers on the borders of Russia, which threatens the peace of Europe. But anyone who points this out, and mentions the military alliance’s relentlessDrang nach Osten, threatens the profits of US defense companies and is attacked as an “appeaser” or “Kremlin stooge” by those with a vested financial interest in keeping tensions high.

Consider the hysterical attacks on British Labour party leader Jeremy Corbyn for his recent, very sensible comments on NATO and Russia. Corbyn was asked in a leadership television debate: "How would you as Prime Minister react to a violation by Vladimir Putin of the sovereignty of a fellow NATO state?"
He replied:

You’d obviously try to avoid that happening in the first place. You would build up a good dialogue with Russia to ask them, support them in respecting borders. We would try to introduce a demilitarization between Russia and Ukraine, and all the other countries down on the border between Russia and Eastern Europe. What we cannot allow is a series of continuous build-ups of troops on both sides which can only lead to great danger in the future. It’s beginning to look awfully like Cold War politics at the present time. We’ve got to engage with Russia, engage with demilitarization in that area, in order to try and avoid that danger happening… I don’t wish to go to war, what I want to do is achieve a world where we don’t need to go to war, where there is no need for it. That can be done.

As Carlyn Harvey, writing in The Canary, points out: "For millions of citizens around the world, this (Corbyn’s anti-war stance), is great news. But for those intent on maintaining the politics of power and the lucrative industries that support that, Corbyn’s vision is nothing short of a disaster.”

Corbyn is portrayed by the endless war lobby as a “dangerous extremist” because if other western politicians followed suit, and promoted disarmament and dialogue, instead of confrontation and war, defense profits would take a big hit.


It was a US President, Dwight D Eisenhower, who first warned us about the US military-industrial complex, back in 1961: “We must guard against the acquisition of unwarranted influence, whether sought or unsought, by the military–industrial complex.”

No one couldaccuse Ike, the Supreme Commander of Allied Forces in Europe in World War Two, of being a “pinko” or a “Kremlin stooge.” But the situation is much worse today than it was back in Eisenhower’s day.orridors of power. They claim to be interested in spreading “democracy,” but the reality is that the neocon movement is all about money and profits. Henry “Scoop” Jackson, the US politician who railed against détente with the Soviet Union in the 70s, was, with very good reason, nicknamed the “Senator for Boeing.”

Thirty years later, the first post-launch meeting of the Henry Jackson Societydiscussed how to get smears about the anti-war academic Noam Chomsky being a “denier” of the Srebrenica massacre into circulation.
For some people it seems, the old Cold War never ended.

How much longer will the citizens of the world put up with a situation in which warmongers with ties to the military-industrial complex are allowed to stoke up international tensions? The next time you read or hear someone issue stark warnings about the “Russian threat” - and why NATO needs to hike its spending to deal with it - just follow the money tail.

It’s likely to be revealing.


THE ESCALATING ANTI-RUSSIAN rhetoric in the U.S. presidential campaign comes in the midst of a major push by military contractors to position Moscow as a potent enemy that must be countered with a drastic increase in military spending by NATO countries.

Posted by seemorerocks at 19:36