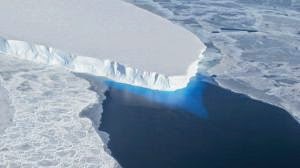 If you want to truly grasp the scale of Earth's polar ice sheets, you need some help from Isaac Newton. Newton taught us the universal law of gravitation, which states that all objects are attracted to one another in relation to their masses (and the distance between them). The ice sheets covering Antarctica and Greenland are incredibly massive—Antarctica's ice is more than two miles thick in places and 5.4 million square miles in extent. These ice sheets are so large, in fact, that gravitational attraction pulls the surrounding ocean toward them. The sea level therefore rises upward at an angle as you approach an ice sheet, and slopes downward and away as you leave its presence.

This is not good news for humanity. As the ice sheets melt due to global warming, not only do they raise the sea level directly; they also exert a weaker gravitational pull on the surrounding ocean. So water sloshes back toward the continents, where we all live. "If Antarctica shrinks and puts that water in the ocean, the ocean raises around the world, but then Antarctica is pulling the ocean towards it less strongly," explains the celebrated Penn State University glaciologist Richard Alley on the latest installment of the Inquiring Minds podcast. "And as that extra water around Antarctica spreads around the world, we will get a little more sea level rise in the US than the global average."

Alley, a self-described "registered Republican" and host of the PBS program Earth: The Operators' Manual, spoke on the occasion of truly dire news, of the sort that ice sheet experts like him have been dreading for some time. Last week, we learned from two separate research teams that the ice sheet of West Antarctica, which comprises just one relatively small part of Antarctic ice overall but contains enough frozen water to raise global sea levels by some 10 or 11 feet, has been irrevocably destabilized. Scientists have long feared that of all the planet's great ice sheets, West Antarctica would be the first to go, because much of it is marine-based—the front edge of the ice sheet is bathing in increasingly warm water, which is melting it from beneath. Here's a helpful visualization of how this process works:

The great ice sheet naturally wants to push outward and spread into the sea, Alley explains, much like water spreads out when poured onto a flat surface. But the advance is held up by the "grounding line"—the ice sheet's mooring at a particular point on the sea floor.

And here's where the problem arises: The latest research suggests that the ice is melting from below, and thus, losing its moorings. The oceanfront glaciers of the West Antarctic Ice Sheet are experiencing "rapid grounding line retreat," in scientific parlance, and this is happening "sooner than we initially expected, scientifically," says Alley. The cause seems to be a change in winds driven by global warming, which in turn is sending more warm water toward Antarctica's glaciers. And as the glaciers lose ice from below, there is less friction with the ground, and thus faster ice flow into the sea, where it can contribute to sea level rise.

"What they found," Alley continues, "is that it's likely that the fuse has already been lit."

You need to really pause, and take a deep breath, to take in what that means: A little over three meters of sea level rise is already on its way into the ocean, with nothing to stop it. Granted, the process still takes a long time—likely hundreds of years—because as Alley explains, melting an ice sheet is a lot like unsnarling a traffic jam. "There's this huge merge, that you take something that is a couple of miles thick, and a hundred miles wide, and you squeeze it way down," he says. "And it's coming out through a place that's well less than a mile thick, and not nearly that wide."


Last year, the United Nations' Intergovernmental Panel on Climate Change released a high-end estimate for global sea level rise of about three feet by the year 2100. Is that still valid? Given how long it takes to drain West Antarctica, maybe so. But maybe not. The latest research, Alley points out, "did not run the worst-case scenario."

Either way, three feet by 2100 is hardly any consolation to those humans, our grandchildren or great-grandchildren, who will be living in the 22nd century. If it hasn't already collapsed by then, West Antarctica will be coming for them. And what does that mean?

As of now, coastal counties are home to 39 percent of the US population and generate nearly half of our GDP, according to the National Academy of Sciences. In other words, they are absolutely fundamental to our country and economy. But the collapse of West Antarctica basically means that in the future, all of these coastal regions—and all of the coastal regions everywhere else in the world—will be subjected to ocean conditions similar to a permanent Superstorm Sandy.

"The highest storm surge from Hurricane Sandy, or Superstorm Sandy, was just under 13 feet, and a whole lot of places it was 10 feet or less," explains Alley.

"And we're looking at 11 feet, or something like that, from West Antarctica. Plus a little thermal expansion [water expanding as it gets warmer] and some mountain glacier melting that are already on the table. And so you can sort of think of the storm surge of Hurricane Sandy, something vaguely in that neighborhood for most of the coastline of the world."

The chief difference (besides the lack of hurricanelike wind and rain) would be that the water wouldn't retreat any more. It wouldn't just be a storm surge, it would be the new state of the ocean.

And it gets even worse: West Antarctica isn't the only worry. To hear Alley tell it, it's just that West Antarctica is pretty much lost to us already. Next up is a place that we might still be able to save, but that we're currently playing an insane game of roulette with: Greenland.

It contains much more water than West Antarctica: about 23 feet of global sea level rise. That's equivalent, on a worldwide scale, to the storm surge caused by Supertyphoon Haiyan when it struck the Philippines last year.

Satellite images show Greenland's ice sheet before and after a stunning melting event in July 2012. NASA.

And here again, the news isn't good. Recently published research finds that much more of the Greenland Ice Sheet than previously believed is exposed, from beneath, to the ocean. Basically, the new science amounts to a topographical remapping exercise—for terrain that is as much as three miles below a vast sheet of ice. And it turns out that the canyons beneath Greenland's glaciers are deeper than scientists previously thought, and in some cases, well below sea level. This means, in turn, that more of the ice sheet is potentially exposed to warming seas—similar to the ice sheet of West Antarctica.

"It doesn't yet say, 'Greenland is about to fall into the ocean, run for the hills,'" Alley says, "but it does make Greenland look a little bit more vulnerable than we thought."

But not yet sacrificed. Not yet gone. For Alley, then, the true upshot of the West Antarctica news is this: It makes saving Greenland absolutely essential. Ten feet of sea level rise will be incredibly painful to adapt to already, but 33 feet from the combined loss of West Antarctica and Greenland? It's simply inconceivable.
There is no such thing as adapting to that.

Essentially, then, we need an all out global push to stop global warming and save Greenland—and thus, the places where we all live.

Or, we could continue to fiddle and do nothing. If that happens, then Greenland is still just the beginning. Next up: the rest of Antarctica, of which West Antarctica comprises only a small part. Melt the whole continent, the largest mass of ice on Earth by far, and someday, it would reward you with as much as 200 feet of sea level rise. That would take a very long time to happen, and there is still plenty of time to stop it…but, we know already that it is possible, given high enough temperatures. According to Alley, Earth currently sports many so-called "raised beaches" at altitudes far above our current sea level—preserved shorelines from a time when the oceans were radically higher.

That's why, as a human civilization on Earth, pretty much the dumbest thing you could possibly do is melt your planet's ice sheets. And that's why, if the news about West Antarctica isn't enough to snap us into action on climate change, then we will only be able to thank ourselves for the disaster that is coming.

To listen to the full interview with Richard Alley, you can stream below: