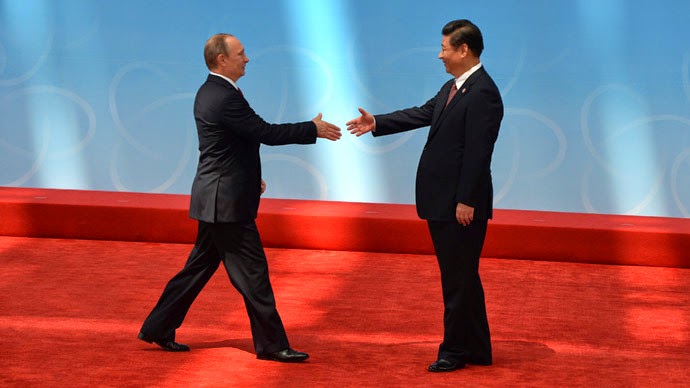 With the China-Russia deal conducted outside the dollar system we see the beginning of the de-dollarization and de-Americanization of the world, former assistant Secretary of the Treasury Paul Craig Roberts told RT.

RT: A number of Western businesspeople have boycotted the St. Petersburg economic forum. Are they going to lose out?

Paul Craig Roberts: I think it is just a symbolic way of accommodating Washington. I don’t think it means anything, I do not think the firms in Germany, for example, want to harm the relationships with Russia, nor do they want it in France. So I do not think it means much. What is much more significant is that the number of Asian countries that are coming to this forum, and energy deal signed by Russia and China, is an indication that the world will be moving away from American financial hegemony.

This large energy deal will be conducted outside the dollar system, so here is the beginning of the de-dollarization, the beginning of the de-Americanization. This is an indication that the two large countries, Russia and China, are forming a strategic alliance because they are tired of being harassed and cut out of the Western mechanisms, they are tired of the threats. So they are moving in a new direction, and they will take much of the world with them. I do not think the European countries that have strong economic relations with Russia will want to lose those.

RT: Pressure from Washington may account for some business figures not going to the forum, but are there other reasons too?

PR: They have made it for that reason, if there are opportunities that they could have made there, if they are not present they cannot make the deals. In that sense it is a bad decision. I do not know how many countries actually decided not to come. I think in a way the American credit card companies were hurt by the sanctions that Washington kept talking about because this has now forced Russia to develop its own credit card companies, which it should have done a long time ago.

It has always been a mystery to me that economically stable countries continue to operate within the American financial system. They are dependent on American credit card companies, for example. They are dependent on American internet companies, which simply allows the NSA to spy on them better. Why do they accept such dependence on American economic institutions? I have never understood. I think in a sense these developments are good for Russia because it means it is now developing its own infrastructure and will not be dependent on Washington’s infrastructure for communications, for finance, for credit. So this development is good for Russia, it is not good for Washington. Russia's President Vladimir Putin speaks at the opening ceremony for the Naval Cooperation 2014 joint China-Russia naval exercise at a command center of the Wusong naval base in Shanghai on May 20, 2014.(AFP Photo / Alexey Druzhinin )

RT: A lot of people are expected to come from Asia for the forum. Can we expect any major trade deals between Russia and that part of the world?

PR: I would think so. I mean all countries need energy and all countries are getting tired of Western bullying. Western machinations, the air of superiority over the world that Washington has. It was not long ago that President Obama declared that the US was the exceptional country. That means we come first, you are second. Other people do not like thinking of themselves as second class, so I think that this is the beginning of transformation that has been long implicit in the organization known as BRICS. That is starting to form up and be a real thing.

RT: Do you think there's genuine concern from the West over growing ties between Russia and China?

PR: Yes, there is very much concern. The American foreign policy doctrine calls Washington to prevent the rise of other global powers. So now it is confronted not just with two rising global powers, but these two powers have a mutual alliance and both understand that Washington is surrounding them with military bases. Washington has land bases in the Baltics, in the Eastern Europe; possibly they are going to be in Azerbaijan, Georgia, Ukraine. And China is confronted with new American naval and air bases positioned to control the flow of ships through the South China sea. So both countries see that Washington has in mind hemming them in, preventing their rise and they are forming a strategic alliance because the two are stronger together than independently. And this worries Washington very much.

I think it has overreached, it should have accepted the Russian cooperation, it should not have seen the rise of China as some kind of the threat. But it made mistake in demonizing both countries and it is trying to operate in the ways that prevent or slow the rise of these two countries. So this is a very serious situation for the world because it has the implication of a serious war.