The killing of Italian journalist and his companion 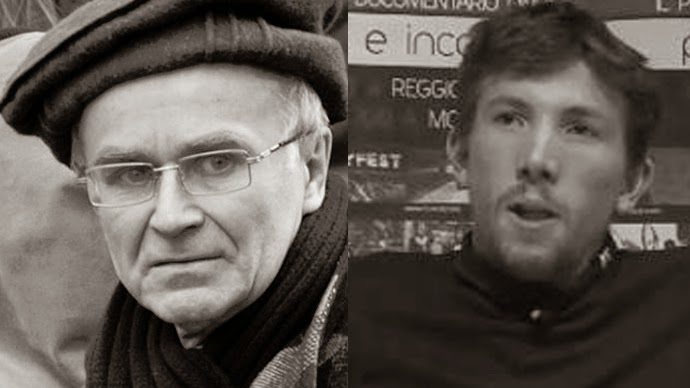 Mironov’s body is currently in a morgue in Slavyansk and might soon delivered to Russia, media report.

Mironov, 60, was killed along with Italian photojournalist Andrea Rocchelli, 30, by mortar fire on Saturday near the village of Andreevka, a couple of kilometers from Slavyansk, eastern Ukraine. French journalist, William Roguelon was wounded in the attack.
The journalists were in the area to report on fighting between local self-defense squads and Kiev forces amid an ongoing military operation launched weeks ago by the coup-imposed government to suppress protesters who seek more autonomy. Following the tragedy, Kiev put the blame for the deaths of the journalists on “terrorists,” as the new Ukrainian authorities refer to opposition activists.

Nikolay Goshovsky, a senior official from Ukrainian Prosecutor General’s Office said that a criminal case on “aggravated killing” was opened, reported UNN agency. He also stated that the journalists got killed as armed forces “responded” to actions of self-defense rather than during Kiev’s “anti-terrorist” operation.

Witnesses’ accounts, including Roguelon, claim the opposite and accuse the military of the armed assault.

Evgeny, a taxi driver who also survived the attack, told RT’s video agency Ruptly that the journalists left his car, “raised their hands and started taking photos when machine gun shooting began.” The driver said that he got frightened and jumped into a nearby ditch where he was then joined by the Italian and French journalists and the Russian interpreter.

“We were sitting there when the mortar shelling started. The first shells fell near the ravine but then one shell reached us,” Evgeny said. “I saw that the interpreter was not moving at all [after the shelling]. The [Italian] correspondent, who was sitting next to him, crawled to me and then stopped moving too.”

The one surviving correspondent, apparently the Frenchman, the driver said, ran after him towards the car.

“When we got out on the road he ran but then fell on the ground being shot. I thought he was dead. There was no time to think, as mortar shelling went on, I dropped into the car and drove away to the city,” Evgeny added. Roguelon reportedly managed flee the site and was then taken by locals to a hospital where he received treatment.

The bodies of the Italian journalist and his Russian interpreter were found on Sunday morning by local self-defense, witnesses told Ruptly.

“Apparently, one [of the attacked journalists] got hit into the head, because the head is absent. The other it seems was cut by shell splinters,” they said. The witnesses added that the head of one of the bodies was “torn to pieces” and “only scull” was left at the site. Documents – Mironov and Rocchelli passports – were in the pockets of the dead and parts of two photo cameras were found nearby, they told the agency.

So far, no official details of the incident have been made public. Ukrainian law enforcers said Sunday that they could not examine the site of the deadly incident since the area, according to their information, was controlled by self-defense forces.

The Italian Foreign Ministry confirmed Sunday that the Italian reporter was killed during the attack, adding though that final confirmation can only be made after his body is identified by relatives. Russian Foreign Minister, Sergey Lavrov “exchanged condolences” with his Italian counterpart over the deaths of “Rocchelli and his Russian interpreter Mironov,” it said in a statement.

On Monday, Ukrainian acting Foreign Minister Andrey Deshchitsa assured his Italian counterpart Federica Mogherini that Kiev is ready to investigate the circumstances of the tragedy and assist in organizing the transportation of the Italian reporter’s body to his homeland.
Colleagues mourn Mironov who was never 'simply an
interpreter'
Svetlana Gannushkina, the head of the Civic Assistance Committee and a member of Memorial rights organization, also confirmed that Mironov, their “colleague and friend” was killed near Slavyansk.

Mironov “knew several European languages including Italian” and “often accompanied journalists, politicians and members of international rights organizations as an interpreter,” she said in a statement published on the committee’s website. “But never and nowhere had the rights activist and former political prisoner Andrey Mironov been simply an interpreter,” Gannushkina said.

In 1985 Mironov was arrested for distributing ‘the samizdat’ – the underground press and books banned in the USSR and a year later sentenced to four years in prison in for “anti-Soviet propaganda,” his colleague recalled. However, as Mikhail Gorbachev launched perestroika, Mironov along with other political prisoners was released.

As a rights activist – independently or together with colleagues – he visited many flashpoints, and repeatedly traveled to Chechnya during the conflict in the Russian Caucasian republic, according to Gannushkina.

“A man of a crystal-clear soul was killed,” she said.

Novaya Gazeta (NG) daily published the last report by Mironov with photos taken by Rocchelli in Ukraine. The paper applied to Russian Foreign Ministry asking diplomats to help organize transporting the body of the killed Russian journalist – who worked for them as a freelancer - to his native soil, reports RIA Novosti citing NG’s Editor-in-chief Dmitry Muratov.
Posted by seemorerocks at 14:40