Asia Times correspondent Pepe Escobar explains the military coup in Thailand: Bangkok elites, militaries and former PM in a power struggle. Pepe calls it a 'soft coup' but warns of what might happen next. 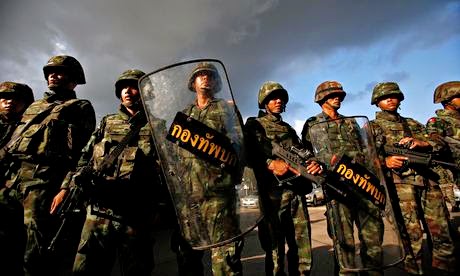 Thailand is a prosperous nation with strong banks, modern factories, flourishing tourism, a growing middle class and other typical markers of a successful democracy. Which, as Bloomberg explains, is exactly what it lacks. Thailand has had so many coups in its modern history that scholars sometimes refer to the last 82 years as its “coup season.” In between, violent political strife has been chronic. The latest round features deadly street clashes, politically tainted corruption trials and the army taking control after an election derailed by protests. In contrast to political activists almost everywhere, the ones in Thailand are demanding less democracy... and this is the timeline of events that led to the latest 'coup'. What is perhaps more troublesome for a nation desperately seeking allies, under US law, sanctions are triggered if a country receiving military aid suffers a coup.

The Arguments behind the unrest...(via Bloomberg)


Bangkok’s urban middle class and royalist elite have resisted ceding control after Thaksin drew rural voters to the polls, swelling turnout to more than 75 percent in the last two elections. The protesters reject the idea that they’re thwarting democracy, saying the damaged political system can only produce a credible government after it’s swept clean of Thaksin’s influence. His supporters, enraged by the way their repeated victories have been overturned, have joined the cycle of stalemates and sporadic violence. A gradual accommodation might involve more power-sharing with regional governments, though that could take a generation or more.

The worst outcome could be a breakup of the country or even a civil war. While the 86-year-old king, whose portrait hangs in most homes and shops, has intervened in the past to calm his subjects, he’s seen as too ill to do so now.

The Timeline of events...

And here come US Sanctions...


Six months of never-ending political crisis, with street protests which left more than two dozen people dead including three in a gun and grenade attack, eventually led to the powerful generals' decision to seize the reins of power in a coup after imposing martial law and apparently contradicting early claims the move was just an apolitical measure "to keep peace and order".


The problem with 'admitting' it's a coup...


Thailand's longstanding ally the US, has already called for a return to civilian rule,  warning it expects the army to "honour its commitment to make this a temporary action to prevent violence and not undermine democratic institutions".

Under US laws, sanctions are triggered if a country receiving American military aid suffers a coup. In a previous Thai military coup (2006), US froze military assistance for a year-and-a-half.

The coup may also push the US to cut military assistance to Thailand. Human Rights Watch criticised the Obama administration for failing to call for the immediate reversal of martial law.


And while the general has already banned media from discussing the coup, he has now introduced another rule...
This will not end well...