Making sense of the Thai coup 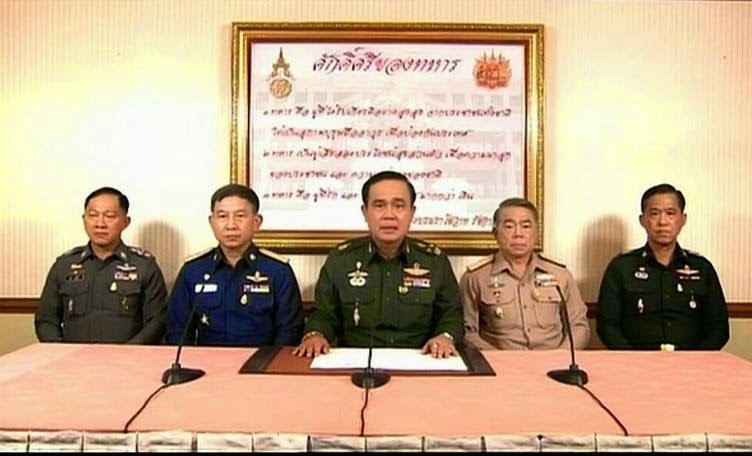 May 23, 2014 (Tony Cartalucci - ATN) - Life goes on as normal in Thailand's capital of Bangkok the day after the Royal Thai Army declared it was taking power from the diminished, ineffectual "caretaker government" Thursday. Businesses and offices were open as usual on Friday with no discernible difference for Thais. TV programming is expected to be returned to normal today as well.

The coup was carried out at the climax of half a year of massive and protracted street demonstrations against the proxy regime of billionaire Thaksin Shinawatra. Shinawatra was himself ousted in a coup in 2006 and has since fled the country, residing primarily in Dubai. With his formidable political machine left intact, however, he has been able to rule the country remotely through a series of nepotist-appointed proxies including his brother-in-law Somchai Wongsawat, and his own sister, Yingluck Shinawatra.

While the Western media continues portraying Shinawatra's various proxy regimes as "democratically elected governments," they are nothing of the sort. Shinawatra - a convicted criminal, neither on the ballot or even in the country but admittedly running his political party and those standing in for him as prime minister - is unelected and therefore a dictator.

Shinawatra's ability to continue running the country remotely, and even contest elections despite being a convicted criminal evading a two year jail sentence, multiple arrest warrants, and a growing list of pending court cases is due not only to his impunity within Thailand, but impunity he has enjoyed as a result of significant and continuous support from Wall Street, London, and Brussels.

Indeed, for over a decade, Thaksin Shinawatra has attempted to transform Thailand into a Western client state. An enumerated list of Shinawatra's sovereignty-usurping concessions and crimes against the Thai people make it clear as to why the military along with Thailand's other indigenous and independent institutions have been working systematically to diminish and uproot his political influence over Thailand:

In the late 1990's, Thaksin was an adviser to notorious private equity firm, the Carlyle Group. He pledged to his foreign contacts that upon taking office, he would still serve as a "matchmaker" between the US equity fund and Thai businesses. It would represent the first of many compromising conflicts of interest that would undermine Thailand's sovereign under his rule.

Thaksin was Thailand's prime minister from 2001-2006. Has since dominated the various reincarnations of his political party - and still to this day runs the country by proxy, via his nepotist appointed sister, Yingluck Shinawatra.

In 2001 he privatized Thailand's resources and infrastructure including the nation's oil conglomerate PTT - much to Wall Street's delight.

In 2003, he would commit Thai troops to the US invasion of Iraq, despite widespread protests from both the Thai military and the public. Thaksin would also allow the CIA to use Thailand for its abhorrent rendition program.

Also in 2003, he initiated what he called a "war on drugs." Nearly 3,000 were extrajudicially murdered in the streets over the course of just 90 days. It would later turn out that more than half of those killed had nothing to even do with the drug trade. In this act alone, Thaksin earned himself the title as worst human rights offender in Thai history, and still he was far from finished. 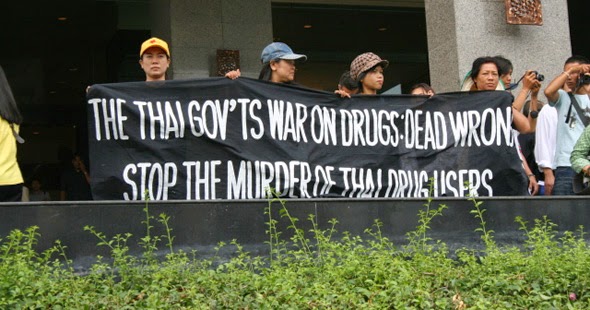 In 2004, he oversaw the killing of 85 protesters in a single day during his mishandled, heavy-handed policy in the country's troubled deep south. The atrocity is now referred to as the "Tak Bai incident."

Also in 2004, Thaksin attempted to ramrod through a US-Thailand Free-Trade Agreement (FTA) without parliamentary approval, backed by the US-ASEAN Business Council who just before the 2011 elections that saw Thaksin's sister Yingluck Shinawatra brought into power, hosted the leaders of Thaksin’s "red shirt" "United Front for Democracy against Dictatorship" (UDD) in Washington DC.

Throughout his administration he was notorious for intimidating the press, and crushing dissent. According to  Amnesty International, 18 human rights defenders were either assassinated or disappeared during his first term in office. Among them was human rights activist and lawyer Somchai Neelapaijit. He was last seen in 2004 being arrested by police and never seen again.

Also throughout Thaksin's administration, the Committee to Protect Journalists (CPJ) claimed in its report, "Attacks on the Press 2004: Thailand" that the regime was guilty of financial interference, legal intimidation, and coercion of the press.

In April of 2009 gunmen would fire over 100 rounds into the vehicle of anti-Thaksin activist, protest leader, and media mogul Sondhi Limthongkul in a broad daylight assassination attempt. He was injured but survived.

On April 10, 2010, heavily armed professional militants deployed by Thaksin Shianwatra and his "red shirt" front targeted and assassinated Colonel Romklao Thuwatham who was at the time commanding crowd control operations near Bangkok's Democracy Monument. Thaksin's "red shirts" would go on to clash with the military for weeks before ending their riot with mass city-wide looting and arson.

In August of 2013, businessman and outspoken Thaksin opponent Ekkayuth Anchanbutr was abducted and murdered.

In addition to this, Thaksin Shinawatra had constructed what he called the "United Front for Democracy Against Dictatorship" (UDD) also known as the "red shirts." It is the militant wing of Shinawatra's political machine and through campaigns of mass murder, assassinations, and other forms of political intimidation, it has gone far in granting Shinawatra the impunity he has, until now, enjoyed.

In 2008, red shirts shot/hacked to death by machetes an opposition community radio host's father, after pro-Thaksin radio hosts mobilized supporters to surround his house and the father attempted to flee. Regime demagogue, Kanyapak Maneejak (DJ Aom), when asked about the incident during a "City Life Chiang Mai" interview, claimed, "the reds there all came following their hearts."

In 2009, in addition to large-scale street violence visited upon Bangkok which saw two shop keepers shot while trying to stop red shirts from looting their businesses, red shirts would violently disrupt an HIV/AIDS awareness march organized by homosexual & public health activists. "Out in Perth" reported in their article, "Chiang Mai Pride Shut Down by Protests as Police Watch On," that organizers were locked inside a building while red shirts began throwing rocks and yelling abuse through megaphones. Police looked on until organizers decided to call off the event.

Also in 2009, Bangkok's English paper, "Bangkok Post" would publish a report titled, "Rak Chiang Mai 51: A pride or a disgrace for Chiang Mai?" which would describe in detail the red shirts' methods of violence and intimidation.

In 2010, Thaksin Shinawatra deployed some 300 heavily armed mercenaries to augment "red shirt" mobs in Bangkok. Armed with M16s, AK47s, M79s, hand grenades and other small arms, they assassinated an army colonel, killed soldiers, bystanders and even protesters among their own ranks in reckless firefights that spanned several weeks and climaxed in a campaign of mass arson across the capital. In all, over 90 would die.

During the most recent political crisis, red shirts have frequently surrounded the homes of opponents, threatening and intimidating them from speaking out against the regime. This includes the home of  Chiang Mai's Cultural Council president, teachers and parents of Regina Coeli College, and violently attacking a peaceful protest held at Chiang Mai University's art museum and again during a march held several weeks later.

On the eve of February 2014 general elections, the "red shirts" carried out a brazen broad-daylight assassination of NGO worker, activist, and protest leader Sutin Taratin.

Regime militants carried out a grisly attack in the eastern province of Trat that left scores maimed and a five-year old girl dead and a similar attack carried out in Bangkok that left many maimed along with a woman and two children killed.

Multiple M79 grenade attacks were carried out on the office of the National Anti-Corruption Commission in northern Bangkok in conjunction with a blockade carried out by the regime's "red shirts." The blockade was aimed at obstructing criminal proceeding against then prime minister, Yingluck Shinawatra. Regime supporters would be arrested for possession of AK47s, M79 grenade launchers, and RGD-5 hand grenades, the latter two with lot numbers matching those used in previous attacks across the city.

Recently, an accidental discovery was made by police of a white Mazda parked outside the resort of regime MP Sitthichai Kittithanesuan, containing AK47s in the backseat. The car was owned by an "adviser" to a regime minister.

Regime militants carried out an M79 grenade attack and drive-by shooting on Bangkok's Democracy Monument on May 15 that killed 3 and left dozens more injured.

With such an extensive, documented list of enumerated crimes alongside an equally impressive list of concessions made to corporate-financier interests within the United States, it is clear to see why the United States has supported the regime for years, and immediately condemned the military's move to oust the regime and begin uprooting its political machinery.

US Secretary John Kerry would sate in an official US State Department press statement that:

I am disappointed by the decision of the Thai military to suspend the constitution and take control of the government after a long period of political turmoil, and there is no justification for this military coup. I am concerned by reports that senior political leaders of Thailand’s major parties have been detained and call for their release. I am also concerned that media outlets have been shut down. I urge the restoration of civilian government immediately, a return to democracy, and respect for human rights and fundamental freedoms, such as press freedoms. The path forward for Thailand must include early elections that reflect the will of the people.

The European Union would offer a similar statement. The EU and Kerry's comments are just the opening shots in a torrent of negative media now emanating from the West's press houses. Tired narratives ranging from "class division" to an impending "civil war," to attacks on confidence in Thailand's economy are sweeping headlines. The stable of "human rights" organizations Western special interests maintain and regularly leverage to advance their agenda, have condemned the coup in unison and demanded that "civilian rule" be restored. As seen above, "civilian rule" included a concerted campaign of terror directed at its political opponents that has left over 24 dead and hundreds injured in recent months.

What will follow in the coming days and weeks is a full-spectrum disinformation campaign aimed at Thailand and propagated throughout the mainstream media. Depending on assessments of Shinawatra's staying power and the condition of heavily armed mercenaries his political machine had been staging before the coup, the West may or may not begin organizing and supporting a low-intensity terror campaign with the intention of carving off Thai territory or simply plunging the nation into punitive disarray.

With the West's agenda elsewhere around the world facing increasing challenges, its ability to contest the turning tide in Thailand may be significantly diminished. Still, complacency and ignorance could offer Western special interests a window of opportunity to reassert themselves in Thailand if Thais and their allies around the world do not mobilize sufficiently to meet the propaganda blitz and planned destabilization that is to come.