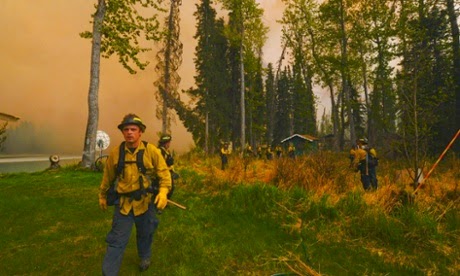 A wildfire chewing through the forest in an Alaskan wildlife refuge has expanded in size, prompting authorities to order the evacuation of 1,000 buildings, officials said.

The Funny River wildfire was burning on about 250 square miles of forest, most of it inside the 1.9-million-acre Kenai National Wildlife Refuge in southern Alaska, and was 30% contained, Willie Begay, a US Forest Service spokesman, said on Monday.

Almost 600 firefighters are battling the blaze among rolling hills mostly covered with black spruce, Begay said. The area has been without rain for more than a month, and steady winds from the southwest are fueling the flames.

"Once it catches the wind in those areas, it's pretty fast- moving," Begay said. He added that rain might come in the next few days, which would help to put out the fire.

The week-old fire has expanded from about 172 square miles on Sunday, when it was one-fifth contained.

The number of people told to flee their homes isn't clear, said Michelle Weston, spokeswoman with Management Team, which includes the state Division of Forestry and federal and local officials.

Weston says no injuries were reported. Only minimal damage had been reported as of Monday morning, and firefighters were able to put out the two cabin decks and one trailer roof that caught fire, the Alaska Interagency Incident Management Team said on its Facebook page.

The Funny River Fire is named after a nearby road where all residents were being evacuated. She says Alaska State Troopers were going door to door, evacuating an area that's mostly second homes and is home to many retirees.

Crews were attacking the fire by air, with two Alaska air national guard helicopters and five other helicopters involved, she said.

In Arizona, firefighters made progress containing a wildfire that had burned more than 25 square miles of forest in a northern canyon as of Monday morning. Officials said the fire was 25% contained.

Crews fighting a wildfire in Arizona focused on building containment lines along the last unprotected stretch of the blaze. Firefighters will build 3mi of protection lines on the southern end of the Slide Fire after having completed much of their work on the blaze's key northern and western flanks.

The human-caused fire has been burning since Tuesday around Oak Creek Canyon, a scenic recreation area along the highway between Sedona and Flagstaff that would normally be crowded with tourists Memorial day weekend. Slide Rock State Park, one of the most-visited tourist spots in Arizona, has been closed.

In Alaska, the Funny River Fire is the most active of several large wildfires burning in the state. Firefighters have been flown in from Oregon, Montana and Canada to help Alaskan crews.

Alaska's governor, Sean Parnell, flew over the fire midday Sunday, before the wind-driven expansion. He praised the multiagency effort including state, local and federal officials.

Wildfires in Alaska's remote areas are not unusual during the summer months, with an average of a million acres burned each fire season, Weston said. High wind is also a challenge for crews.

The state is experiencing unusually dry conditions because of unseasonably warm spring temperatures. The state Division of Forestry on Friday issued a statewide ban on outdoor burning.

The Kenai National Wildlife Refuge was established in 1941 as the Kenai National Moose Range and was aimed at moose protection. Wildlife viewing, fishing, camping and hiking attract visitors from around the world.

Posted by seemorerocks at 09:41