For some reason the 'hairstyle in search of a brain', John Kerry, comes first.

Inside the mind of Edward Snowden

EXCLUSIVE: Edward Snowden Tells Brian Williams: 'I Was Trained as a Spy'


If you have a look this was advertised as the full Edward Snowden interview - not a chance for Kerry to spread his lies!


Why is Snowden in Russia? 'Ask the State Department,' he says
Former National Security Agency contractor Edward Snowden told NBC News that although he would “like to go home” to the United States, his first priority is to see that vast government espionage programs he helped expose are “reformed.” 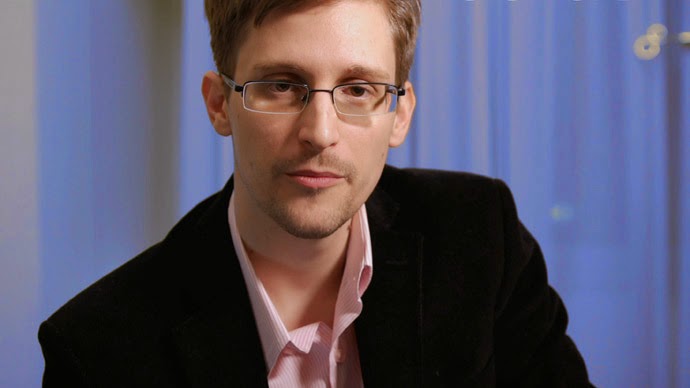 Former National Security Agency contractor Edward Snowden told NBC News that although he would “like to go home” to the United States, his first priority is to see that vast government espionage programs he helped expose are “reformed.”
In an interview with NBC News’ Brian Williams, Snowden added that those who question his intentions in seeking asylum in Russia should “ask the State Department” why he is stranded in Moscow.
Snowden said that after he leaked classified documents to journalists, he intended to fly from Russia to Cuba and on to Latin America, but the US government canceled his passport.
"The reality is I never intended to end up in Russia," he said. "I had a flight booked to Cuba onwards to Latin America and I was stopped because the United States government decided to revoke my passport and trap me in Moscow airport.”
"So when people ask why are you in Russia, I say, 'Please ask the State Department,'” he added.
In his first interview with a US television network since the NSA revelations began nearly one year ago, Snowden said he would love to go home to the United States, but amnesty or clemency in his home nation would be up to the public and the government.
“I don’t think there’s ever been any question that I’d like to go home,” he said, adding that he is a patriot who gave up his cushy career and high salary to expose the NSA’s secret global spying regime.
“I’ve from Day One said that I’m doing this to serve my country.”
Yet Snowden said his return to the US, where his family and friends remain, is not paramount as long as the surveillance programs he exposed continue.
“My priority is not about myself. It’s about making sure that these programs are reformed – and that the family that I left behind, the country that I left behind – can be helped by my actions,” he said.
“I think it’s important to remember that people don’t set their lives on fire, they don’t say goodbye to their families – actually pack up without saying goodbye to their families – they don’t walk away from their extraordinary – extraordinarily comfortable lives – I mean, I made a lot of money for a guy with no high school diploma – and, and, and burn down everything they love for no reason.” 
Snowden called the NSA’s illegal spying operations an example of the “lack of respect for the public” the US government has, exemplified in “the dirtiness of the way these [surveillance programs] are being used.”

He said the attacks of September 11, 2001 were and still are used by the government to clamp down on Americans’ liberties.
“I think it’s really disingenuous for – for the government to invoke – and sort of scandalize our memories, to sort of exploit the – the national trauma that we all suffered together and worked so hard to come through to justify programs that have never been shown to keep us safe, but cost us liberties and freedoms that we don’t need to give up and our Constitution says we should not give up.”
He added that he is motivated to preserve these freedoms vested in the US Constitution.
“If we want to be free, we can’t become subject to surveillance. We can’t – give away our privacy. We can’t give away our rights. We have to be an active party. We have to be an active part of our government. And we have to say – there are some things worth dying for. And I think the country is one of them.”
Snowden’s temporary asylum in Russia is due to expire on August 1, but he says he will reapply if no other solutions arise before then.
“If the asylum looks like it’s going to run out, then of course I would apply for an extension.”
He added that he has “no relationship” with Russian officials.
“I have no relationship with the Russian government at all. I'm – I’ve never met the Russian president. I’m not supported by the Russian government, I’m not taking money from the Russian government.”
The US has charged Snowden with theft and two counts of espionage for leaking 1.7 million classified documents to journalists at the Washington Post and the Guardian. The revelations he supplied range from a massive domestic telephone data collection program to the surveillance of world leaders to the clandestine use of data links for major technology companies like Google to cherry-pick user information.
He maintained to NBC News that the programs he revealed violated the constitution, and that he would not have leaked the information as he did if there were respectable, reliable protections for government and contractor whistleblowers.
In response, US Secretary of State John Kerry challenged Snowden live on NBC’s Today Show, saying he should “man up and come back to the United States."
"We'd be delighted for him to come back. He should come back. That's what a patriot would do. A patriot would not run away and look for refuge in Russia or Cuba or some other country. A patriot would stand up in the United States and make his case to the American people," Kerry added.
"He can come home but he’s a fugitive from justice which is why he is not being permitted to fly around the world," he said, adding that Snowden’s claim that the US ultimately made him stay in Russia was “pretty dumb.”
Kerry went on to call Snowden a “coward” and a “traitor” for his statements and actions.
"What he's done is expose for terrorists a lot of mechanisms which now affect operational security of those terrorists and make it harder for the United States to break up plots, harder to protect our nation," he said.
Snowden also responded to official attempts to tar him as an unqualified, low-level IT worker while he assisted both NSA and Central Intelligence Agency surveillance operations.
"I was trained as a spy in sort of the traditional sense of the word, in that I lived and worked undercover, overseas — pretending to work in a job that I’m not — and even being assigned a name that was not mine,” Snowden said.
“So when they say I’m a low-level systems administrator, that I don’t know what I’m talking about, I’d say it’s somewhat misleading,” he said.
Snowden specified that he was not only involved in undercover work for the CIA and the NSA, but actually taught others the specific skills he knew.
“What they are trying to do is that they are trying to use one position to distract from the totality of my experience, which is: I’ve worked for the Central Intelligence Agency – undercover, overseas, I’ve worked for the National Security Agency – undercover, overseas, and I’ve worked for the Defense Intelligence Agency as a lecturer at the joint counter-intelligence training,” Snowden said.
NBC News said it has filed a Freedom of Information Act request in search of the “paper trail” within the NSA that Snowden says is there, referring to the whistleblower’s alleged written correspondence to the NSA’s general counsel questioning the legality of some of the agency’s surveillance operations. The US government denies the correspondence happened.

There's no end of dark shit going down at the moment

Germany's federal prosecutor general has reportedly decided not to launch a criminal investigation into alleged mass spying on the European country’s citizens and the hacking of Chancellor Angela Merkel’s phone by the US National Security Agency. 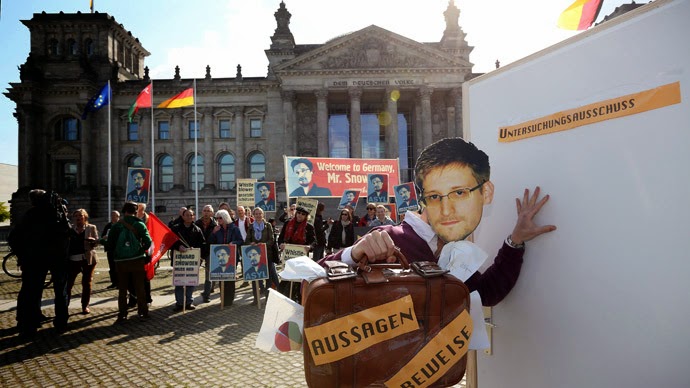 Chief Federal Prosecutor Harald Range did not find enough evidence to warrant criminal proceedings into the case, reported German newspaper Sueddeutsche Zeitung, citing sources from the prosecutor’s office.
In Range’s opinion, the newspaper wrote, the proceedings would be purely “symbolic” since it is impossible to gather evidence about the activities of the NSA and its British counterpart, GCHQ, on German soil.
The prosecutor’s office said it has no access to documents or witnesses. Requests submitted to American authorities are likely to remain unanswered while attempts to get information from the German government and intelligence agencies were dropped. German authorities told investigators that media reports were the only information they could offer, according to Sueddeutsche Zeitung.
Der Spiegel denied the prosecution documents supplied to it by former NSA contractor Edward Snowden, citing source protection. The prosecution’s attempts to access more documents from Snowden’s trove failed, as did its efforts at getting a written opinion from Snowden himself, the newspaper reported.
Range’s spokesman said Tuesday that the final decision on the matter will be announced “soon,” and did not deny that the investigations may be wrapped up. Papers – which were in work for months – are reportedly ready but have yet to be signed by the chief prosecutor. The supposed termination of the probe was met “with bewilderment” at Germany’s Office of the Data Protection Commissioner (ULD) for the German state of Schleswig-Holstein.
It is “completely incomprehensible” that the prosecution did not try to question known suspects, said ULD data protection commissioner Thilo Weichert, especially given the amount of reports on government surveillance by the United States and others in the news.
Weichert chastised Germany’s top investigative authority for halting a preliminary look into the violation of privacy levied against millions of German citizens. He said the actions of data protection officials “will be reduced to absurdity” without a proper investigation.
"The fact that these investigations are technically extremely complex and new legal territory should not be an obstacle but an incentive to enforce the law," he said, according to Computerworld.
A refusal to open an investigation into spying would be “grotesque,” said Rena Tangens of Digitalcourage, the privacy and human rights group that filed a complaint against the German government for its alleged involvement in illegal covert intelligence operations.
Classified data leaked by Snowden revealed that the NSA had been monitoring Chancellor Merkel's personal cellphone. The Americans also used their Berlin embassy as a platform to monitor the mobile phone communications of other high-ranking German politicians


A forum on 'internet freedom' without Julian Assange, Edward Snowden or Glenn Greenwald?!!  Welcome to 1984, welcome to Big Brother

Blacklisting Edward Snowden, Glenn Greenwald, hacker Jacob Appelbaum and others by the Stockholm Internet Forum (SIF) on internet freedom provoked strong criticism from participants and outrage on Twitter. Here's a taste of the criticism to which the panel didn't reply.
READ MORE: http://on.rt.com/3ckc6o