Black, ominous clouds have been dumping heavy rainfall over southeast China ever since May 12.


Warm winds, laden with the moisture spilling off a super-heated Pacific Ocean, collided with an intense storm track that often combined upper level moisture flows spilling off the heat dome near the Caspian, a high intensity heat and evaporation event now ongoing over India, and cold, unstable air streaming down from the Kara Sea in the Arctic. Since mid-May this relentlessly persistent pattern has been in effect. And the inundation has been ongoing and extraordinarily intense with day-after-day deluges pounding a sprawling region from south-central China and on to the coast.

(Chinese news report from yesterday showing widespread flooding.)
Each new dawn brings with it fresh losses with numerous major roads closed, bridges washed out, and adding to what is now an almost endless tally of evacuation orders. Daily rainfall totals in the range of 2-6 inches or more have saturated grounds, burst riverbanks, and turned streets into torrents. By today, more than 1 million people had been impacted with nearly a half million evacuated or rescued from flooded buildings. Since the, still ongoing, floods began in mid-May, more than 25,000 homes and 40 souls have been lost to the epic storms. 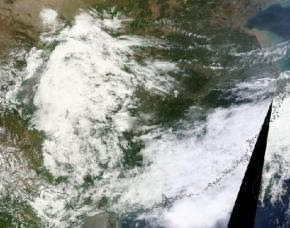 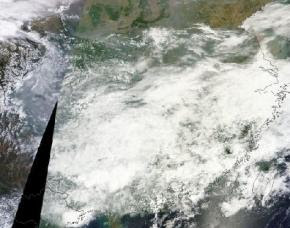 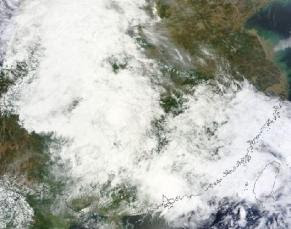 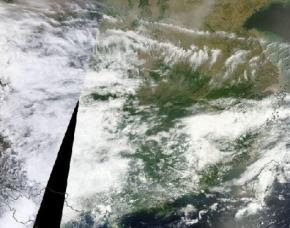 (Relentless heavy rainfall over Southeast China visible in the above four satellite images on [left to right, top to bottom] May 12, May 18, May 23rd and May 27th. Image source:LANCE-MODIS.)
The Chinese have invested heavily in flood defenses since the 1998 deluge that resulted in 4,000 dead, over 15 million homeless, and 26 billion dollars in damages. During that year, a strong El Nino set off severe storms that turned large Chinese rivers into raging inland seas. The Three Gorges Dam on the Yangtze was built, in part, to prevent this kind of terrible flooding.

But fears of a possible repeat of the 1998 event are on the rise despite heightened Chinese defenses. A strong El Nino may again be gathering in the Pacific and with global temperatures now warmer than even those seen during the late 1990s, atmospheric moisture loading is probably at its highest in at least the last 10,000 years.
Extreme Floods Linked to El Nino and Climate Change
This extreme atmospheric heating and global trend toward El Nino could well result in continuing and possibly worsening local impacts for Southeast China. It is the second region this spring to suffer epic flooding after the worst flood event in 1,000 years resulted in the destruction of over 100,000 homes in the Balkans.
High atmospheric heat content increases both the frequency of severe rain and drought events due to an amplification of the hydrological cycle through evaporation. Overall, it is estimated that the current .8 C of warming over 1880s temperature averages has caused a 6% amplification of the hydrological cycle worldwide. That’s 6% heavier rainfall and 6% more intense droughts when averaged over the entire globe. But as we well know, weather isn’t an evenly distributed phenomena. Some regions are more likely to receive a bulk of that increased rainfall even as others are more prone to see a majority of the increased drying. Add to this consequence a meandering Jet Stream (set off by loss of Northern Hemisphere sea ice) with the tendency to lock in very persistent weather patterns and you end up with a greatly enhanced likelihood for extreme weather due to the wide-ranging effects of atmospheric warming.
Weather Forecast Calls for More Severe Storms
For southeast China, weather patterns will remain locked in for a continuation of potential extreme rainfall over the next week. The large heat domes over the Caspian and India will continue to spill out moisture over Southeast China even as the extraordinarily warm Pacific provides its own moisture flow. Notably, the weather forecast for this Wednesday calls for another large outbreak of thunderstorms with the potential to drop 2-4+ inches of rainfall over already saturated and inundated grounds. Thursday through Sunday is expected to bring yet more waves of severe thunderstorms to the region.
Given this combined extreme weather and climate state it is certainly possible that the current flood tally will continue to lengthen for Southeast China.
Links:
LANCE-MODIS
Half a Million Evacuated as China Braces for More Flooding
Dozens Die in China Floods
More Rain for Flood Ravaged South China
Recovering From Balkan Flood Disaster Will Cost Billions
Top Climate Scientists Explain How Global Warming Wrecks the Jet Stream and Amps up the Hydrological Cycle to Cause Dangerous Weather
Hat tip to Colorado Bob
Posted by seemorerocks at 17:57