Concerns over oil well near school
A Taranaki primary school says it has significant concerns about the prospect of an oil and gas well operating within a few hundred metres of its gates. 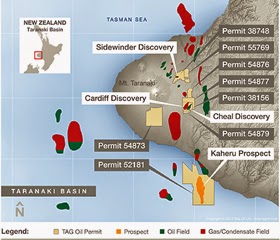 Tag Oil wants to build a well in a paddock 600 metres from Norfolk School, south of Inglewood.

The school, which has about 140 pupils, sent home a letter on Friday advising parents of the proposal.

Chair of the board of trustees Karl Hitchcock says the school needs reassurances from the company about some matters such as increased traffic, as well as about the discharge of chemicals and what would happen if an incident occurred.

It's estimated that during construction more than 50 vehicles a day would be coming and going from the site.

Landowners near the site are also concerned about its proximity to the school.
Tag Oil said it was confident there is no risk to the school.