Ukrainian war back with a vengeance 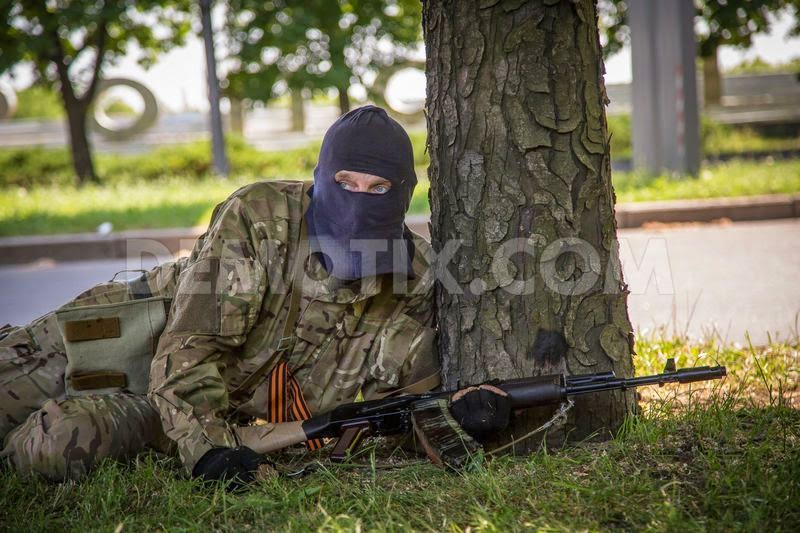 Eastern Ukraine: The war rages on

A day after the elections and the war is back with a vengeance.

According to the Guardian president-elect, Poroshenkis promising to end the armed insurgency in the east of the country in "hours".

However it seems according to latest information that according to claims on Twitter, that Donetsk self-defense forces have regained control over the international airport in the eastern city after Ukrainian troops launched a military operation there, deploying fighter jets and helicopters.

“The people’s army has the airport in Donetsk back under control. We are rooting out the remaining Kiev’s remaining troops. Airstrikes have stopped for now,” said the tweet from the self-proclaimed People’s Republic of Donetsk.

However, other reports on Twitter suggest shooting in Donetsk still goes on, now moving to the downtown


At least three civilians have reportedly been killed and several wounded when the Ukrainian Army launched a mortar attack on the town of Slavyansk in eastern Ukraine. One of the shells fell near a local teachers college, according to Ridus news portal.

Residential blocks were ruined as a result of the assault by Kiev's forces on Monday, the Ridus correspondent reported from the scene. At least two apartment blocks were damaged and “at least two people – a man and a woman – were killed,” the reporter sai 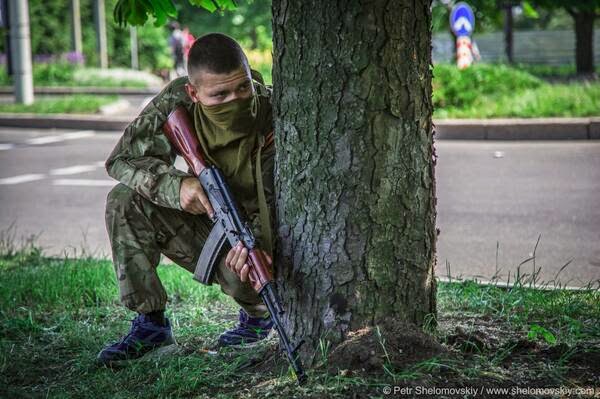 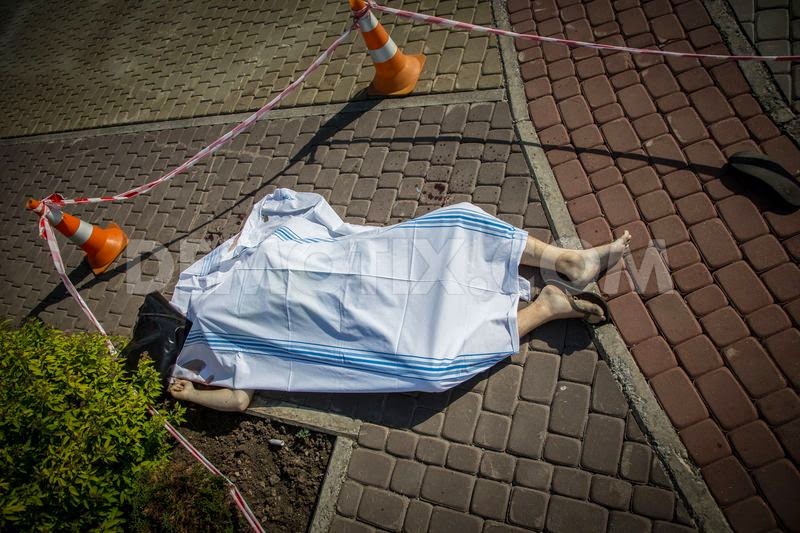 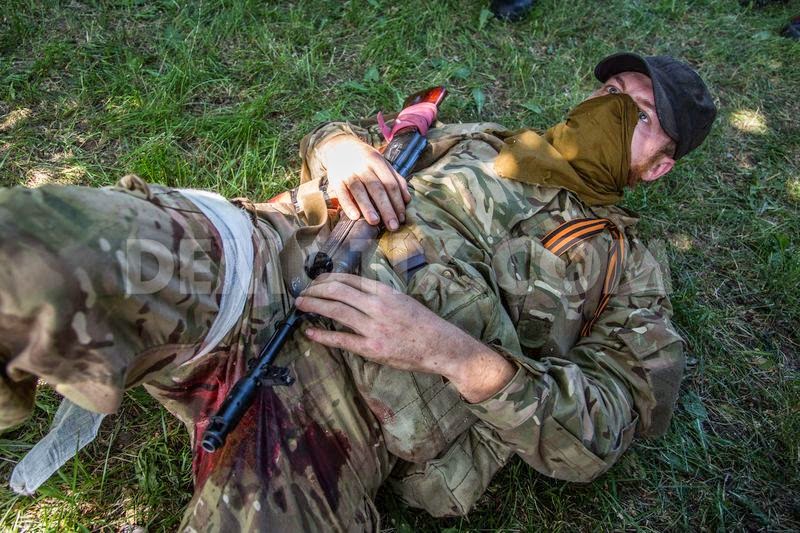 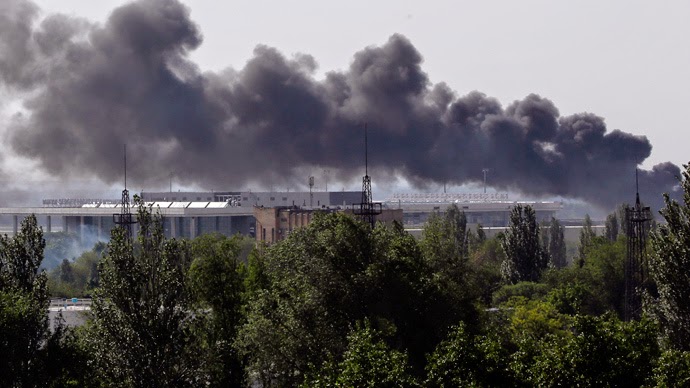 In the meantime reports are coming in that a rocket-propelled grenade fired by the Ukrainian army has hit a truck carrying wounded self-defense fighters near the Donetsk airport, killing a driver

“Only the driver was killed in the shelling. A few wounded were taken to the hospitals of Donetsk. But we don’t know if they received fresh wounds in the attack," the representative of the DNR said.

Earlier people’s governor of Donestk Region, Pavel Gubarev said in a post on Facebook the truck carrying the wounded was marked as an ambulance. He added that 15 more were wounded in the strike on the truck.


'Poroshenko has tough road ahead after winning Ukrainian election'

A look at the 'Chocolate King'

And here is the western propaganda view 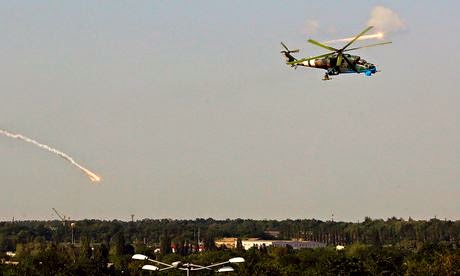 Ukraine's president-elect, Petro Poroshenko, promised to end the armed insurgency in the east of the country in "hours", as Kiev's forces launched air strikes on separatists during an intense battle to regain control of Donetsk airport.

With almost all the votes counted on Monday afternoon, Poroshenko, a pro-west businessman, was on course for a decisive victory with 54% of the vote, while his nearest challenger won just 13%, but when he takes up office he will be faced with the immediate task of bringing calm to Ukraine's eastern regions.

The pro-Russia forces who have occupied government buildings in eastern Ukraine said they were ready to negotiate with Ukraine's new leadership, but only with Russian mediation and on equal terms. The separatists have declared themselves de facto independent states and claim Kiev has no jurisdiction over them.

Less than a fifth of polling stations opened in the Donetsk and Luhansk regions on Sunday following a massive campaign of intimidation by the separatists, who say they want the eastern regions of Ukraine to join Russia after questionable referendums earlier this month.

But as the majority of Russian troops have now moved away from the border with Ukraine, the prospect of a Russian invasion or a Crimea-style annexation of the territory is unlikely.

Russia's foreign minister, Sergei Lavrov, said Moscow was ready to enter talks with the new leadership, in his country's first high-level response to Sunday's election. "We shouldn't miss the chance that we have now to establish an equal dialogue of mutual respect considering the vote that has taken place, the results of which Russia is ready to respect," Lavrov said.

Poroshenko has not backed off from the harsh tone struck by Kiev regarding the armed rebels in the two regions, repeating on Monday that there could be no negotiations with terrorists and comparing the pro-Russia militia men to Somali pirates. "Their goal is to turn Donbass into a Somalia where they would rule with the power of machine guns. I will never allow that to happen on the territory of Ukraine," he said.

He suggested that he would move quickly and decisively against the rebels: "The anti-terrorist operation cannot and should not last two or three months. It should and will last hours."

Any Ukrainian assault on the rebel strongholds of Slavyansk, or on Donetsk itself, is likely to be bloody, however. Late on Sunday night the first deputy prime minister, Vitaly Yarema, promised that Kiev's "anti-terrorist operation" would be renewed after a pause during the presidential vote.

Lavrov said the renewal of the anti-terrorist operation would be a "colossal mistake" and could threaten the resumption of dialogue.

The separatists took the initiative, however, seizing Donetsk airport on Monday morning, something they had not attempted before. This appeared to be a red line for Kiev, which responded with helicopter assaults. Fighter jets flew overhead and there was a chaotic exchange of automatic and grenade fire, as trucks of separatist fighters arrived at the airport from central Donetsk as back-up. The battle continued as evening fell, and the number of casualties was unclear.

Poroshenko said on Monday he would try to gain the trust of residents in the east, who have looked at the Kiev government and the Maidan movement that toppled the former president, Viktor Yanukovych, with extreme suspicion. He has promised that his first trip as president will be to eastern Ukraine. His inauguration is due in the first 10 days of June.

"We will try to win the trust of those who didn't vote for me," Poroshenko said. "Now the main mission is the unification of the state, the establishment of peace and the eradication of lawlessness."

The separatists, who already have the tacit support of many of the police in the region and have occupied the buildings of the security services in most towns, are becoming more audacious in their targets even as their grip on power appears to be waning. On Sunday, a group of armed men travelled to the mansion of oligarch Rinat Akhmetov, the richest man in Ukraine, who lives in Donetsk and many believe financed the separatist movements in its early days, a charge he has denied.

Whatever the history, it is clear that at least parts of the militia are not under control of the oligarch, who in the past fortnight has come out strongly in support of a united Ukraine.

"We are here for negotiations with Akhmetov," said Anton Kosenko, a self-styled MP of the Donetsk People's Republic, who was wearing a white suit and appeared to be in charge of a dozen fighters with automatic weapons and knives who were lazing on the grass outside the gates to Akhmetov's lavish residence. "The people are beginning to realise that the oligarchs who have been stealing from them for years are now also killing them, and it is time to rise up against them."

There are fears that the splintering rebel groups may start fighting each other, with tensions already visible.

"Without a Russian invasion, they are beginning to panic and are moving further into the depths of madness," said a Donetsk political insider. "They wanted to fight the fascists, but in the absence of fascists, they will start fighting each other."

Poroshenko called for negotiations with Moscow in the presence of international intermediaries. Lavrov said Russia was ready to work with the US and the EU on realising the roadmap drafted by the Organisation for Security and Co-operation in Europe to defuse the crisis. But he said Russia did not need an intermediary in its bilateral relations with Ukraine, especially not the former Georgian president Mikheil Saakashvili, as suggested by Poroshenko's ally Vitali Klitschko, the newly elected mayor of Kiev.

The president-elect promised to return Crimea to Ukraine, though this is likely to be a fruitless pursuit given the wave of patriotism in Russia that accompanied the annexation of the Ukrainian peninsula. A key point in any negotiations with Moscow will be the price at which Ukraine purchases Russian natural gas. Moscow has demanded Ukraine pay back billions of dollars it saved on a significantly reduced gas price under Yanukovych.