The war on journalists

‘Kept in dug-out with sacks on our heads, hands & legs tied’: Russian journos on Ukraine detention

Russian journalists are speaking on their detention in Ukraine, saying they were kept in a dug-out cell, with sacks on our heads, hands and legs tied. They were also threatened with firearms. 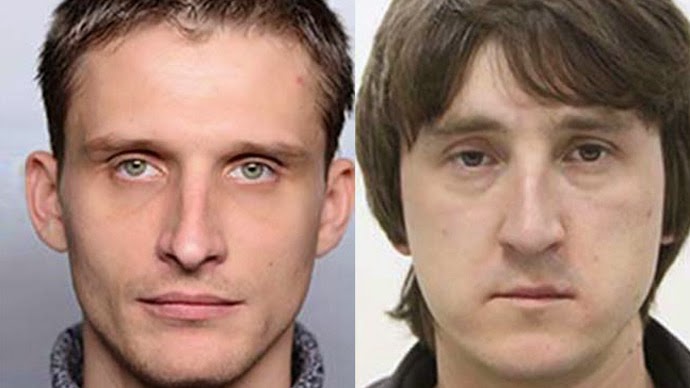 It all started when the two went to the airport [near Kramatorsk] to check the information provided by the locals that the Ukrainian forces had left it.
“Next to the airport, we ended up being at gunpoint by Ukrainian law enforcement officials. We raised our hands and shouted that we are journalists,” cameraman Saichenko said.

After that, they were tied up, loaded into a helicopter and taken to a Ukrainian army camp, where the officers put sacks on their heads and kept them on their knees.
The journalists also said that initially, they were given “no food at all, only gave us some water overnight.”

The two were speaking after being freed and flown to Russia.
Cameraman Marat Saichenko told RIA Novosti that Ukrainian law enforcement officials threatened to kill him and his colleague, reporter Oleg Sidyakin, and did everything possible to make the two would believe in the seriousness of their intentions.
The Russian journalists for LifeNews TV channel were captured by Kiev forces near the eastern city of Kramatorsk a week ago.
They were being investigated on charges of “aiding terrorist groups,” according to Kiev authorities, who refused to give any information about their location and denied a special observer mission access to the journalists.

The accusations of illegally transporting weapons and aiding terrorism against Russian journalists are“nonsense and delirium,” President Putin said earlier, calling the situation “unacceptable” and warning that Kiev’s crackdown on reporters working in Ukraine will affect Moscow’s relations with the “new Ukrainian authorities.”

Based on a Google search, this news appears to be blacklisted in the western media

An Italian journalist and his interpreter were killed in a mortar attack near the city of Slavyansk in Eastern Ukraine. A French stringer was wounded, a source at the Slavyansk militia headquarters told TASS. The journalists worked in the village of Andreyevka near Slavyansk, TASS reports.
The French stringer, William Rongulson, was taken to hospital with a shell fragment wound in his leg. He left the hospital himself after the doctors had bandaged his wound. Any further details are so far unknown.
Earlier on Saturday, representatives of Slavyansk’s self-defense forces opened a return fire at Ukrainian army positions after fierce armed clashes near the village of Semyonovka in Slavyansk’s outskirts. Motor fire as well as submachine and submachine gun rounds could be heard in Slavyansk the whole day.

Graham Phillips on his detention by Kiev security forces

After 36 hours of detention and questioning by various security forces, suspecting him of spying for Russia, British journalist Graham Phillips has been released without any charges pressed. The RT contributor described his time spent captive.

Phillips was arrested on Tuesday at a checkpoint near Mariupol while investigating the bloodshed in the police headquarters in the southeastern port city on May 9, 2014. The journalist explained that he was just taking photos and talking to the armed men at the roadblock as he has done before “dozens of times” covering the turmoil in eastern Ukraine.

‘Things escalated when they saw I work for RT’

“I was questioning these soldiers at the checkpoint in Mariupol on what happened on that day, and I've done that a lot of times before.”

“And then they saw that I work for RT, and then things escalated after that,” Phillips explained. “It got more serious this time. They started phoning people and then I was detained. I had my things taken off of me and interrogated quite thoroughly.”

“I was with soldiers at this point at a block post and then the SBU came, this is the Ukrainian Secret Services.”

That is where Phillips said that he knew that he wasn't going to get released. Two locals accompanying Phillips were both released soon. He in the meantime was taken away late on Monday night, around 9 pm local time, after having spent 9 hours at the military checkpoint.

The UK journalist said that he was transferred to Zaporozhye in a police van at “gun point,” where he was delivered to an army base barracks. “An SBU man made it quite clear that I was under detention,” Phiilips told RT.

“I was spoken to in quite robust terminology. There was no question that I was a prisoner,” the journalist said.

The RT stringer specified that he clearly understood the line of questioning by the Ukrainian authorities, as he speaks and understands Russian.
“They were alright. I mean they fed me, they looked after me, but I was held at a gun point and that was quite dramatic,” he told RT.

‘Are you the guy with a bounty on your head?’

The Ukrainian authorities also accused him of being a spy, Phillips says. Working for Russian TV is a“black spot”, UK national says, that is why the soldiers looked at him “with particular wariness.”

“You are working for Russian TV? What is your purpose? Are you a spy?” Phillips described the kind of questions he was asked.

Answering the question whether or not he felt in danger, the RT stringer replied that every journalist knows “if you make a wrong move, the gun does not ask a question twice.”

“They found some clips of mine. They were looking through the phone of my taxi driver, my partner, my helper, and they found some clips of mine that he had on that phone and then they knew who I was. And then the SBU guy came. He really quickly ascertained exactly who I was, and was asking me questions pertaining to quite specific details, such as am I the guy with the bounty on his head?”

Phillips says that despite the incident he stands by his objective journalism and believes he has not done anything wrong. He also thanked RT for giving him support, accreditation, and “full endorsement.”

“I've been asked quite specific questions about me, about my pieces, and about Crimea,” Phillips says. “I as a journalist went up to Crimea and stood by that referendum, the validity of this referendum.”

“They disagreed with it,” Phillips said about Security Service's view on his reporting, “but the bottom line is that they let me free, I'm ok, and I'm hoping that I might get my things back tomorrow.” He says that at the end of the day the Ukrainian authorities treated him “fairly.”

The Guardian's version of events is HERE

For 'balance' here are details of VICE reporter Simon Ostrovsky's captivity in April.

By comparison his captivity sounds relatively civilised compared to that meted out by Ukrainian security forces to the two Russian reporters, despite the description of the treatment of American media (who prefer to ignore the other stories) as 'brutal"