Chaos broke out in the streets across Australia this afternoon as police clashed with thousands of students protesting the Abbott goverment's changes to tertiary education funding announced in the recent federal budget.

A massive contingent of police officers struggled to contain the masses as they chanted crude slogans including 'bull****, come off it, our education is not for profit,' reported The Age.

Melbourne saw the most tense conflict, however demonstrations in Sydney, Canberra, Adelaide, Perth and Brisbane also exploded in violence and chaos.

Scroll down for video 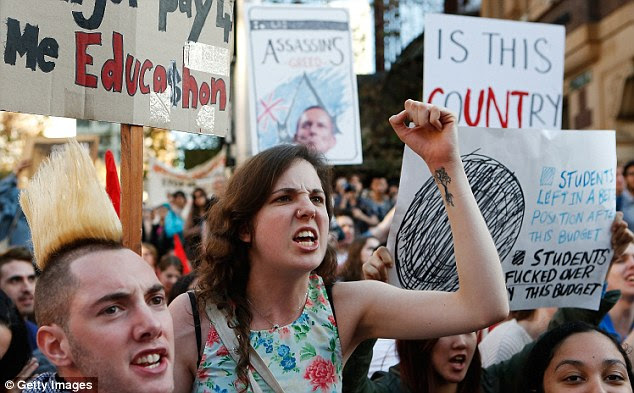 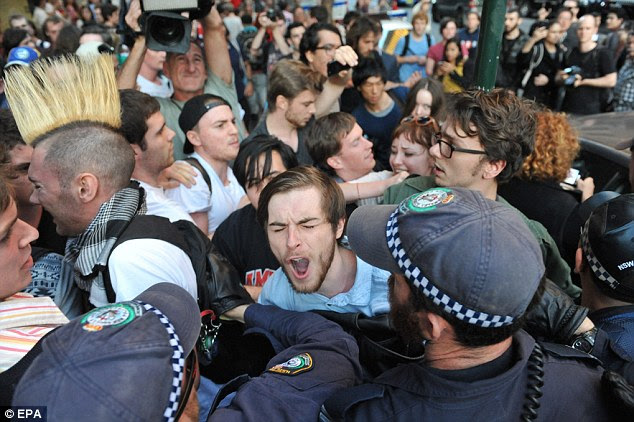 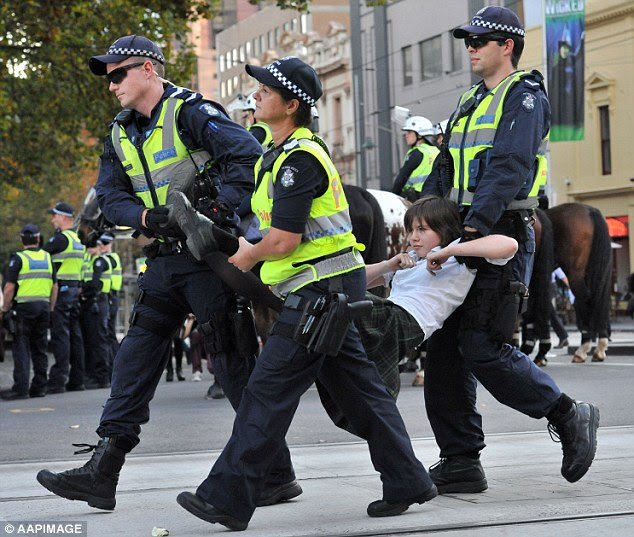 +20
On for young and old: A girl in a school uniform was carried away from the crowd by police in Melbourne

Victorian police arrested 13 people in Melbourne who will receive court summons 'in due course' for offences relating to obstructing roadways and footpaths.

NSW police confirmed at least two arrests were made in Sydney, with a 20-year-old man remaining in police custody and likely to be charged for allegedly lighting a flare.
The protests caused traffic chaos for commuters around the country, with the Melbourne CBD all but shut down and a northbound lane closed on Sydney's George Street at peak hour. 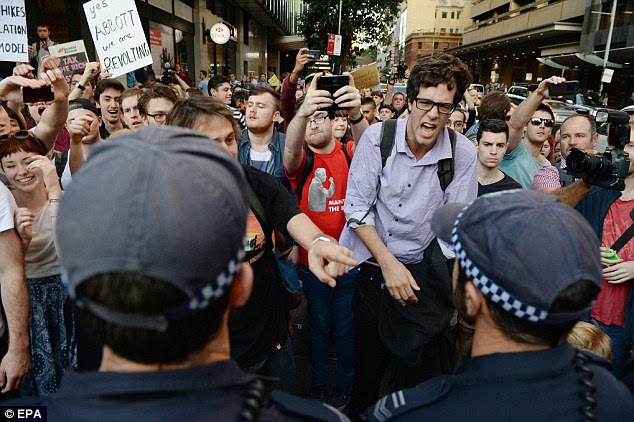 +20
Students are protesting the deregulation of university fees, which they argue could make popular courses at the best universities available to the rich, rather than to the deserving 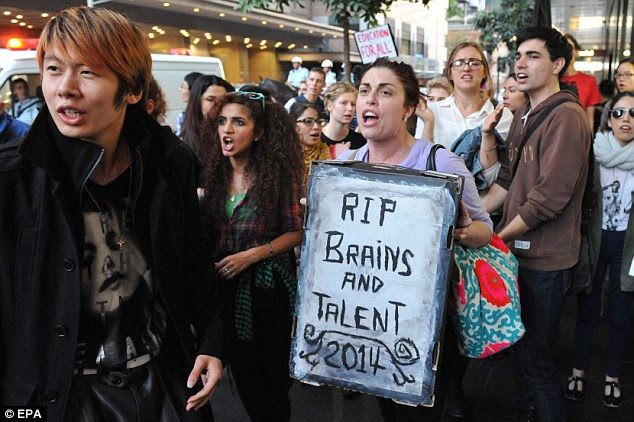 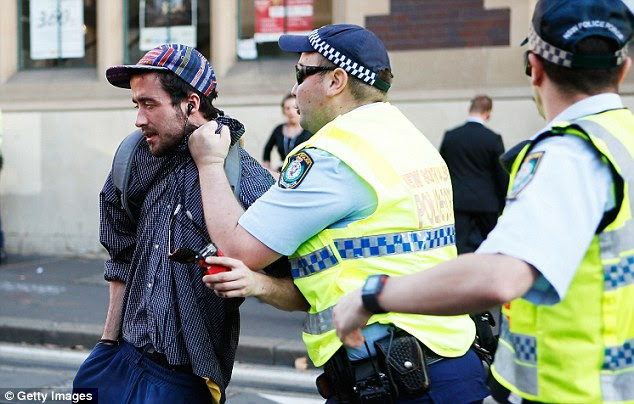 +20
Nabbed: A student protesting cuts to the education budget is moved on by police in the Sydney CBD 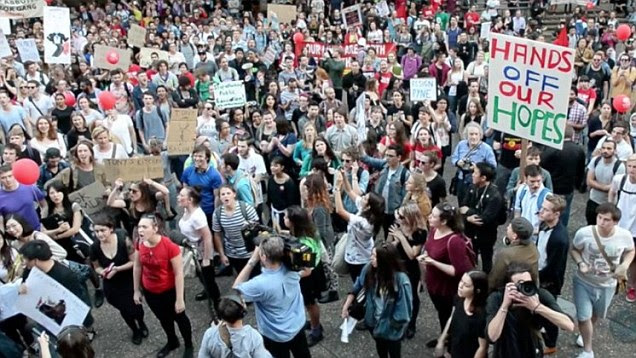 In an email sent by UTS vice chancellor Ross Milbourne to students, it was announced any assignment due on Wednesday would be given a one-day extension.

'Rest assured that UTS will not penalise any student who miss class because they choose to participate in the rally,' he wrote.

The demonstrations dominated Sky News coverage shortly after 4pm, with vision beamed out of the Victorian capital of students being carried away by riot police and others stubbornly forming barriers on the city's famous tram tracks. 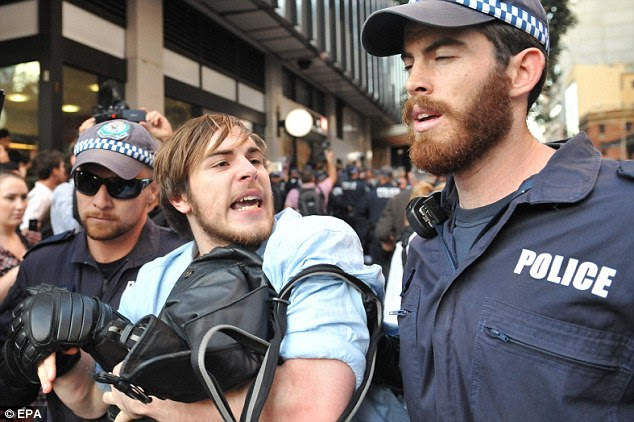 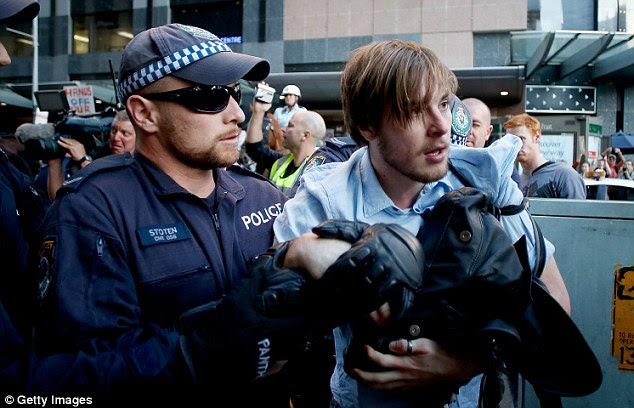 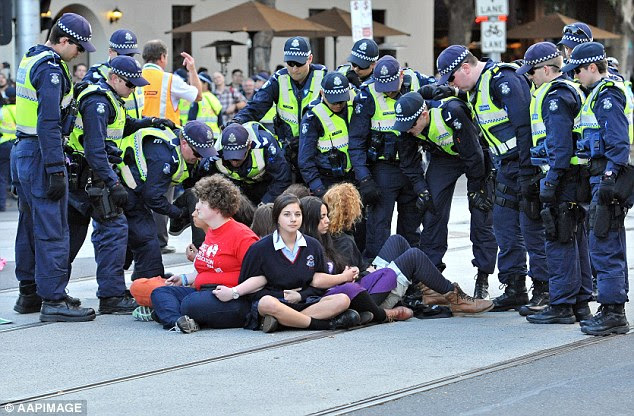 Nine News reported that the protesters 'charged' at officers, while a number of roads in the Melbourne CBD had to be closed to traffic.

Dozens of officers on horseback were on scene to keep the rowdy mob under control, but visibly stuggled.

Prime minister Tony Abbott was forced to cancel a scheduled visit to Deakin University due to the demonstrations. 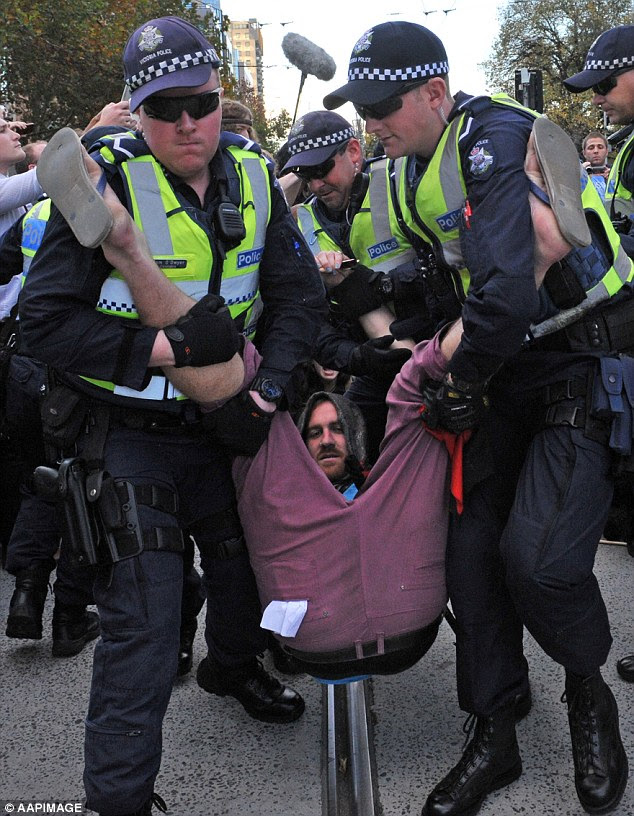 +20
Bummer: A protester is moved on from Spring Street, near the Victorian parliament house 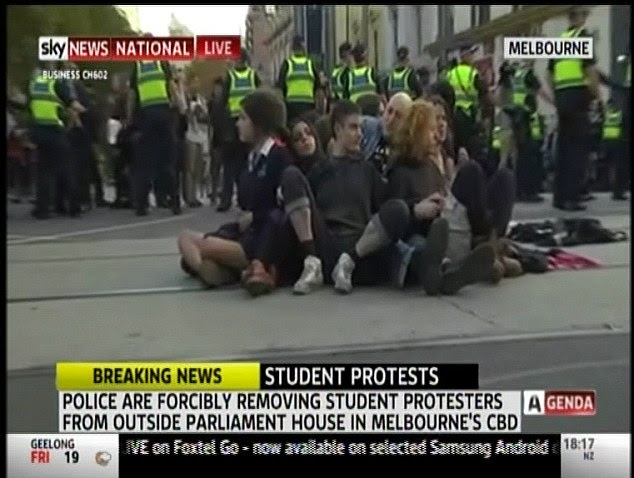 
Pandemonium: Protesters took to the tram tracks in Melbourne in a display against the Abbott budget 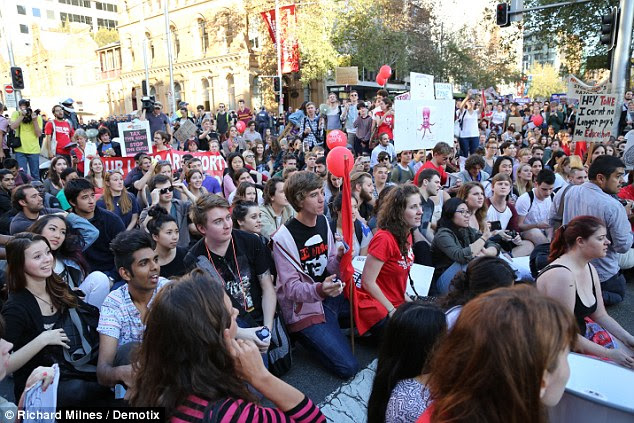 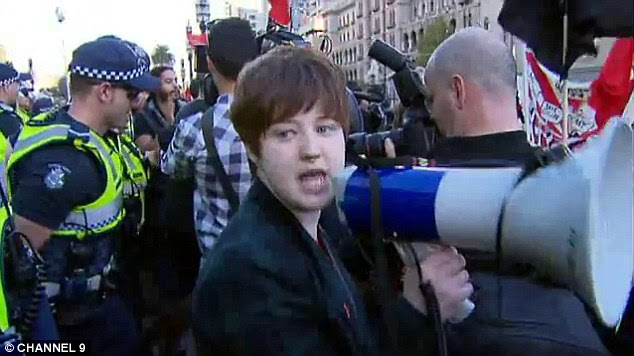 +20
Vocal: Many protesters used megaphones to get their message across 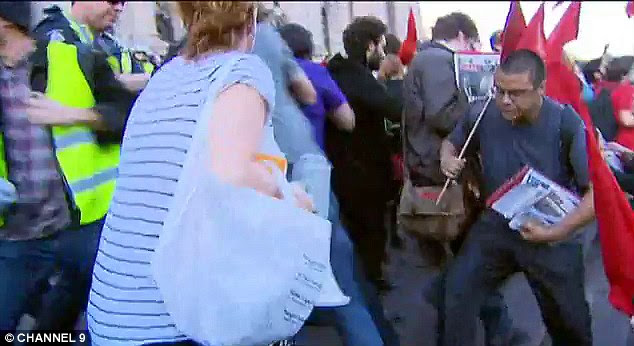 +20
Clash: The protesters became violent with police in many instances 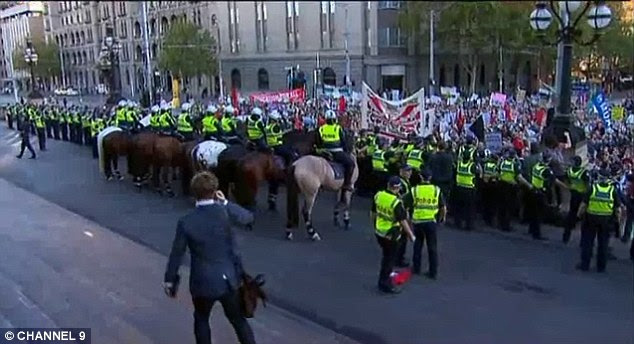 +20
Face off: The rallies were a huge strain on police resources 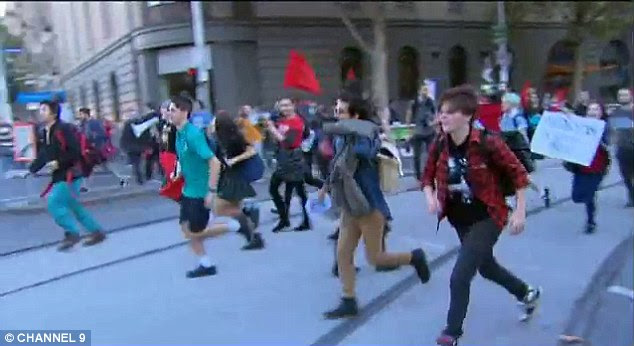 A Sydney man arrested for picking up an already-lit flare was 'bundled to the ground by about six police officers,' AAP reported.

Literally hundreds of police officers wearing fluoro vests packed the streets around
Melbourne's parliament house as the youths marched against cuts to the education budget.

In Queensland, similar scenes led to the shutting down of chunks of the Brisbane CBD. In Canberra, furious young men and women banged on the windows of government buildings. 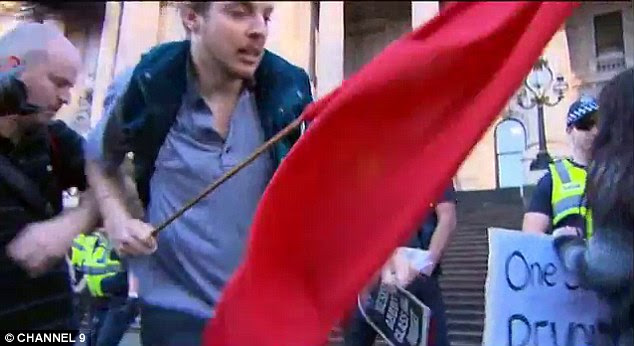 +20
Red army: Some people took to social media to label the protesters 'socialists' 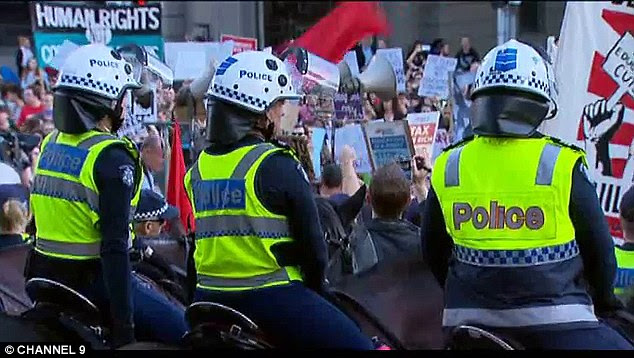 +20
Man and beast: Police patrolling on horseback tried to keep the crowds under control 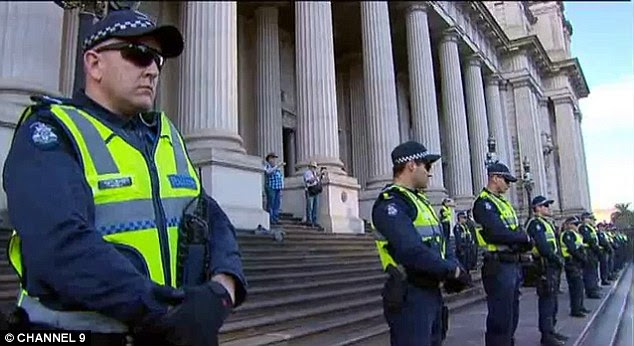 
But it was in Melbourne that the chaos reached its highest pitch as university and TAFE students were carried away from the crowd by the dozen.

'And again Melbourne proves itself as the protest capital of Australia. Imagine if they had something worthwhile to protest about!' Tweeted Randall Gillespie.

Some demonstrators seemed to forget what they were aiming to achieve, prompting Channel 9 reporter Jayne Azzopardi to Tweet: 'And now we actually have protesters protesting that they want to be able to protest. Seriously.'

Tens of thousands of protesters around the country were estimated to have joined in the displays.