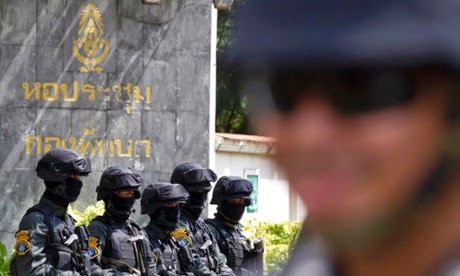 Military coups in Thailand are nothing new. But the latest seizure of power by army chief General Prayuth Chan-ocha underscores the risks to democracy when governments consistently fail to deal adequately with the complex convergence of systemic crises.

Although Chan-ocha has said he is merely seeking to "restore order" in reaction to escalating protests that have seen the deaths of 28 and injury of 700, informed observers point out that the declaration of martial law appears to have been calculated to benefit the coup instigators.

Whatever the case, the opportunity to impose authoritarian rule has emerged in the context of escalating political instability. But few recognise that the driving force of this instability is not simply 'political infighting', but the inexorable intersection of global trends that affect us all.

Three years ago, a prescient editorial in Thailand's English language daily, The Nation, noted that global economic growth was indelibly tied to the abundant availability of cheap oil. Pointing out the links between domestic oil scarcity in countries like Egypt beset with surging social upheaval, the editorial diagnosed the problem as follows:

"The recent sharp rise in food prices has triggered riots in Egypt and other less-developed countries. Higher energy prices have also added on to the inflationary pressure. The poor are the most vulnerable sector to fluctuations in food and energy prices. Governments thus have to come up with subsidy measures for food and energy."


What does this imply for Thailand? The editorial continued:

"The Thai inflation rate is very sensitive to higher oil prices, which will drive up local transport and production costs. As a heavy importer of energy, the rising oil price could derail the Thai economy and drain our reserves if we're not careful."


Indeed, Thailand is a net energy importer. As Southeast Asia's second-largest consumer of energy, with total domestic consumption at 108.7 million tonnes of oil equivalent (TOE), the slow demise of cheap energy sources exacerbated by rising demand from India and China has posed a growing challenge.

Thailand's Ministry of Energy has not been entirely asleep at the wheel. In 2003, a government report acknowledged that the country's "high dependency on imported energy will make Thailand at risk of energy supply disruption and volatility of energy prices, apart from a substantial foreign currency loss for the imports of energy." The report urged the government to embark on a strategy to diversify energy supply sources and ramp up domestic renewable energy investment.

But the pace of transition has been too slow, with "little change to the status quo" - and so far the poor, especially rural farmers who have played an increasing role in recent protests, have been most affected.

We need to call a spade a spade: Thailand's deteriorating economy is driven significantly by its fossil fuel dependence. In 2013, the International Energy Agency (IEA) warned that Thailand's economy was especially vulnerable to external shocks, disruptions to its energy supplies and oil price escalation. High international oil prices would push up the Consumer Price Index (CPI).

It's happening now. Thailand's Ministry of Commerce stated that the CPI had risen by 2.11% in March due to "increases in food and energy prices" rising further to 2.45% in April. The prices underpinning inflation in particular affected "rice, pork, cooking gas and vegetable oil."

Welcome to the future. The IEA also projected that Thai energy consumption in Thailand will rise by 75% over the next two decades, corresponding to a dramatic increase in its oil import bill, which could climb to $70bn - three times the current level.

Also to blame for current inflation are "higher electricity rates and a weaker baht", along with "droughts in some areas" that could result in "shortages of agricultural products."

Erratic climate impacts on Thailand are already playing havoc with the economy. Between 1981 and 2007, annual mean temperature in Thailand rose by 1C. Over the last 50 years, the frequency and levels of precipitation have decreased, even while scientists expect that this will accompany an increase in intensity of extreme weather, storm surges and floods.

This is undermining Thailand's position as one of the world's largest rice exporters. Over 40% of Thai citizens depend on agriculture for their livelihood. Widespread floods in October 2010 affecting almost three million people led to a loss in rice production of about 0.7 million tonnes. Droughts in the same years sunk water levels to 15% of their total capacity, also debilitating rice production.

Devastation caused by flooding in 2011 led to a halt in planned government expenditures, slashing domestic consumption which accounts for about half of economic output. The flooding also destroyed 14% of rice paddies. This increased economic pressure on government to remunerate affected farmers and back an unsustainable 'rice mortgage scheme' guaranteeing higher-than-market prices to export rice. The result of that, coupled with competition with other major rice exporters, has been a decline in rice exports and a drop in government revenues.

As the rice programme has benefited mostly rich farmers while miring the government in increasing debt, impoverished farmers excluded from the dividends have increasingly seen little choice but to take to the streets.

Faced with these burgeoning economic challenges, struggling farmers, as well as low wage workers, have also ended up mired in debt. Since the 2008 financial crisis, there has been an explosion of private borrowing, such that Thailand's ratio of household debt to GDP has increased from 55 per cent to 80 per cent since 2009. As rampant debt, fuelled by rising living costs (underpinned in turn by energy inflation), has stoked political grievances and economic uncertainty,unemployment is pitched to rise to 600,000 - the highest in a decade.

Recent research has shown that high-debt countries suffer from lower economic growth. In particular large levels of household debt drag growth down.
Such accelerating debt is widening Thai inequality. The top 10 per cent of landowners in Thailand own 61 per cent of total title land. The income share of the most affluent 20% of the population is about 54% compared to only 5% among the poorest 20%.

Since the 2006 coup, economic gains made by the previous Thaksin administration's rejection of failed IMF reforms have been reversed.
Top this off with the interlinked challenges of Thailand's domestic energy scarcity and intensifying climate woes, and we have all the makings of a perfect storm of systemic crises. Any government operating within the framework of conventional 'neoliberal austerity' wisdom - let alone one beleaguered with corruption - would have difficulties managing this scenario.

Operating within the conventional framework which sees each problem as separate, and reacts belatedly to political disturbances on the shallow surface of current affairs, we can't see the forest for the trees. Thailand's crisis is about more than internal corruption, political repression and economic mismanagement - though all three of course feature in large degree. This is about the unravelling of a global paradigm of fossil fuel dependency and endless growth for its own sake.

Thailand's latest authoritarian turn is a warning to us all. Until we are ready to work together to address the structural and systemic context of such interconnected crises, we risk rendering the reactionary resort to state-militarisation an inevitable 'final solution' to keep the lid on a new age of unrest.

Dr. Nafeez Ahmed is an international security journalist and academic. He is the author of A User's Guide to the Crisis of Civilization: And How to Save It, and the forthcoming science fiction thriller, Zero Point. Follow him on Facebook and Twitter @nafeezahmed.