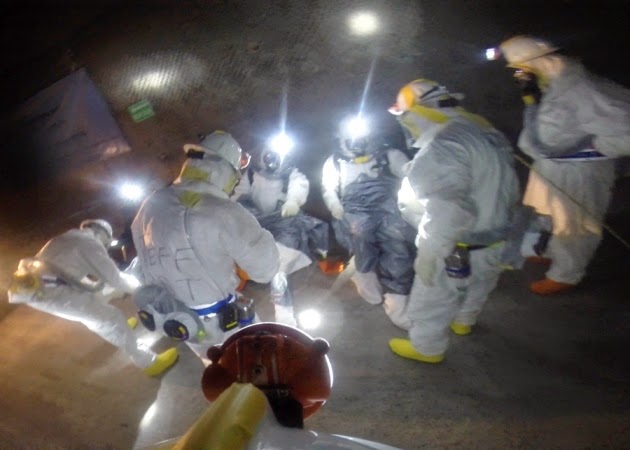 Recovery teams at a New Mexico nuclear waste facilit during a trip into the underground storage halls in April to assess damage from what later turned out to be a ruptured drum.

Lessons from living close to Hanford for as long as I have taught me to follow the money, not the talk. When accidents occur, one can almost be assured it was due to a rush job of some sort in order to meet a deadline. Deadlines in the nuclear industry were created not actually to get a job done on time, but to get the bonus that comes with getting the job done, no matter it seems, how the job gets done. This is the part where we recognize and reiterate to new readers that there is absolutely zero oversight anywhere in the nuclear industry. The NRC is supposed to oversee the contractors at the job level. The NSFSB is supposed to oversee the NRC thought they have less power of enforcement than the NRC and the IAEA is supposed to create rules to follow for safety in the industry, but the IAEA is made up of people from the boards of the nuclear power companies, so you can see how they are useless in creating a safety net for citizens, while terrific in clearing lots of benefits and huge salaries for themselves.

Why is this important? Because nuclear accidents should NEVER happen. And yet they do.
One of the things WIPP said yesterday is that it is not their responsibility as to how Los Alamos creates its containers or Hanford or whomever else gives them waste. It is absolutely their responsibility. How can they turn a blind eye to the protocols of the companies who send them waste to store, when that waste is capable of exploding, which of course did happen on Feb 14, 2014?
After the opening of WIPP there were regulations that mandated checking each lid  on each drum to be sure the head-space was at the correct level. A few years later, that regulation was softened as checking each drum was really time consuming and expensive as it took man hours to the job. And once more, it was softened again so that instead of checking just a few drums from each shipment instead of all, now they could check one if they chose to. Again, lessons from Hanford showed me that the culture in the nuke industry, once regs went soft, were forgotten and trouble was just over the horizon.
In the case of the explosion at WIPP this part of the problem. But the other part of the problem  was that LANL wasn’t in compliance either with their own regulations. Compliance is not easy to do in the world of nuclear power. Cutting corners is. Who is checking whom? Is there anybody out there?
But there’s more. I told you that I did not believe from the start that kitty litter was the issue here. I asked that you be patient and wait to see what surfaces. Something always does!
Don Hancock who has become the spokesperson to the community regarding what may have happened, has not confirmed the kitty litter theory. Once you start look at hard data, you can figure out the appropriate questions to ask. Due to the radionuclides that blew out of the drum into the air at WIPP, we know a few things; from my friend Bobby1′sBlog, we see discrepancies in the data if it were coming from LANL. Could it have come from a different source? Idaho National Labs for instance?
The top of the following graphic shows the isotope measurements for the WIPP release, measured at Station A. The bottom shows the average isotope concentrations for the LA-MIN02-V.001 waste stream from Los Alamos, which has been identified to be the source to the plutonium and americium release.

While there are individual differences in the drums, and since we don’t know how much Plutonium-241 was released from WIPP, it is possible that the WIPP release came from this waste stream, though it really seems unlikely, and the container had to have been an “outlier” that did not reflect the average proportions of isotopes in the waste. If it turns out that more than one container contributed to the WIPP release, this becomes wildly improbable.
I had said from the start that I believed it would be possible for something more devastating than TRU waste to have arrived at WIPP due to either negligence on the part of let’s say Hanford workers or pressure from Hanford Contractors to get the High Level Waste over there to WIPP in small doses since the license to upgrade to HLW has not yet gone through but has been requested by WIPP. We still don’t know where it came from. We still don’t have the initial measurements of how high the readings were on day one. Or each day since. We have nothing but a pile of kitty litter that is slowly dissolving into what I hope is the truth.

Nuclear-waste facility on high alert over risk of new explosions

US repository scrambles to seal off barrels containing cat-litter buffer thought to be responsible for February accident. 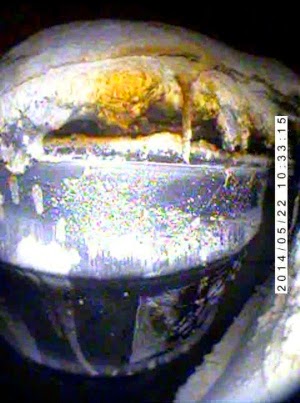 An explosive chemical reaction inside this drum, photographed on 22 May, was probably what caused it to become unsealed and to release radioactivity.

Time bombs may be ticking at the United States’ only deep geological repository for nuclear waste. US authorities concluded last week that at least 368 drums of waste at the site could be susceptible to the chemical reaction suspected to have caused a drum to rupture there in February. That accident caused radioactive material to spill into the repository and leak into the environment above ground.

The Waste Isolation Pilot Plant (WIPP) near Carlsbad, New Mexico, is mined out of a salt bed 655 metres underground, and stores low- and medium-level military nuclear waste, containing long-lived, man-made radioactive elements such as plutonium and americium. The suspect drums contain nitrates and cellulose, which are thought to have reacted to cause the explosion in February, and are located in two of the repository’s eight vast storage rooms — 313 in panel 6, which has already been filled, and 55 in the partly filled panel 7, where the February accident occurred.

To mitigate the threat of further exploding drums, the New Mexico Environment Department (NMED) in Santa Fe issued an order on 20 May giving the US Department of Energy (DOE) and the Nuclear Waste Partnership — the contractor that operates the WIPP site — until 30 May to come up with a plan to “expedite” the sealing of panel 6 and part of panel 7. It is not yet clear when the panels will be sealed, as that will depend on how long it takes to ensure that the sealing is done safely, says Jim Winchester, a spokesman for the NMED.

The order was issued after an inspection team found evidence on 16 May of heat and physical damage to a waste drum in panel 7. The drum was one of a batch from the Los Alamos National Laboratory (LANL) in New Mexico that contained a mix of nitrate salts — generated, for example, in the recovery of plutonium from metal and other scrap during waste processing — and cellulose in the form of a wheat-based commercial cat litter used to absorb liquid waste.

The DOE believes a reaction between the nitrates and cellulose blew the lid off of the container. But this explanation has yet to be proven, Winchester cautions. “It is not yet known how, or if, the reaction created the rupture in the drum(s),” he says.

The LANL last year switched the processing of some of its waste to the wheat-based litter from an inorganic, clay-based absorbent. Winchester says that such changes need to first be assessed for safety, but the NMED was not informed of the change and so did not approve it. The WIPP has come under fire since the accident for progressively watering down safety standards and allowing a lax security culture to develop (see 'Call for better oversight of nuclear-waste storage').

In addition to the drums at the WIPP, another 57 containing the suspect mix are still in temporary storage at the LANL. On 19 May, the NMED told the DOE and the LANL that they had two days to present a plan to secure the drums. In their response on 21 May, the LANL and the DOE said that the drums were being transferred to a tent fitted with fire-control and high-efficiency particulate air filtration to contain any radioactive particles in the event of an accident. They added that air radiation levels and the temperature of the drums were being monitored, and that the drums were being inspected hourly for signs of rupture.

The WIPP has been closed since the February accident and will reopen only “when it is safe to do so”, according to a 22 May statement from the DOE. The accident is still under investigation, and parts of the underground repository are still contaminated with radioactivity. The DOE added that current assumptions and precautions about the hazards of operating the WIPP are being “evaluated and revised”.
Posted by seemorerocks at 18:23