I was alerted to this by listening to Edward Snowden last night.

For those who harbor the illusion that the US is the ONLY place in the world that is restricting the internet and free access to information.

NOTE: There was excellent reporting on this from RT, but I cannot find the footage. Try THIS.

A representative of the Liberal Democratic Party holds that Russian internet search engine and news aggregator Yandex should be classified as ‘mass media’ and face all the restrictions that entails. 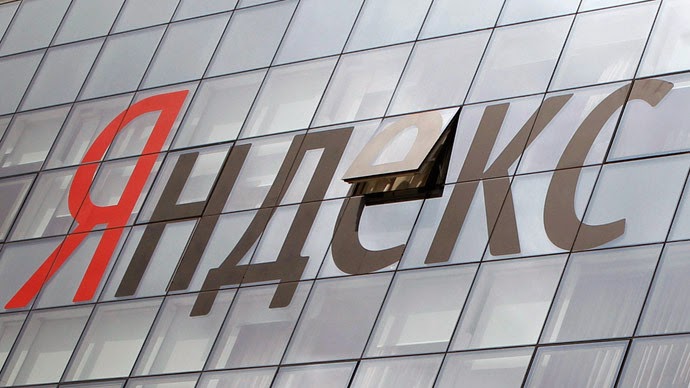 RT,
15 May, 2014
MP Andrey Lugovoy has addressed Russia’s Prosecutor General with an official request to check if Yandex’s activities fall under the Federal Law on Mass Media. The parliamentarian notes in his letter that the search site publishes various news and analytical reports from Russian and foreign media outlets, and this can be seen as the distribution of mass information. Therefore, he writes, the company becomes a major means of mass communication and must be subject to the same rules as every other mass media outlet in the country.
The politician told the business daily Kommersant that in his view there was no difference between a story published in a newspaper and the same story published on the ‘Yandex top news’ web page. Lugovoy added that even if the Prosecutor General rules that the search engine cannot be considered a mass media outlet, he would prepare changes to the law and ensure that all activities of Yandex remained within the legal framework.
Besides, the Russian MP said that as Yandex’s parent company is registered in the Netherlands, it cannot be sued by Russian citizens who find the Yandex News reports abusive or false and this is an infringement of their rights.
The initiative has received support of Leonid Levin, the deputy chair of the State Duma Committee for Mass Media.
“Many people receive information from the Yandex Top News page without even following the links to stories. Why not equate this page to mass media then?” Levin told the newspaper.

Yandex reported that it was unaware of any claims or legal actions by Lugovoy.
The issue of relations between news aggregators and mass media was raised in late April this year during the televised Q&A session between President Vladimir Putin and Russian journalists and bloggers organized by the United Popular Front movement. Putin admitted that “not everything was simple” in this situation, acknowledging that Yandex was not officially registered as mass media and still had many million people visiting its news page every day.
Putin also told reporters that the government and the presidential administration were aware of the problem and were discussing which internet sites should be registered as mass media.
Yandex executives strongly denied their involvement in the mass media business, maintaining they are related to it in the same way as the post office delivers conventional newspaper subscriptions.
“There is no need to get a separate license for headlines on our web-page as these headlines are already a product of licensed media outlets,” the Yandex press service said.


* Blogs with over 3,000 daily visits must register as media
* Move to control online content -Reporters Without Borders
* Russia is Europe's fastest-growing Internet audience

MOSCOW, April 29 (Reuters) - Russia's upper house of parliament approved a law on Tuesday that will impose stricter rules on bloggers and is seen by critics as an attempt by President Vladimir Putin to stifle dissent on the Internet.

The Federation Council overwhelmingly approved the tighter controls on Russian blogs and websites that attract more than 3,000 daily visits, under legislation the government says is needed to formalise the definition of blogging in Russian law.

Opponents say the law will enable Putin to silence opponents who are rarely given air time on the mostly state-controlled or pro-Putin television channels, and have instead used the Internet to organise protests against the former KGB spy.

"The new policy is to restrict free information exchange, restrict expression of opinion, be it in written text, speech or video. They want to restrict everything because they're headed towards the 'glorious past'," Anton Nosik, a prominent Russian blogger and online media expert, told Reuters.

"China is much more liberal than what Russia wants to achieve," he said, describing the move as unconstitutional.

The pressure group Reporters Without Borders (RWB) said the law was an attempt to increase control of online content.

The State Duma lower house has already backed the law and it now needs Putin's signature to go into force. Both chambers are dominated by the United Russia party loyal to the president.

The new rules will require popular bloggers to register by name with Russia's communications oversight agency and conform to regulations on the mass media.

The Kremlin denies allegations of censorship or pressure on the media and says Russians have the right to express their opinions and stage protests.

But Putin has described the Internet as a CIA project and parliament has approved moves requiring social media websites to keep their servers in Russia and save information about users for at least six months.

With 61 million users, Russia is Europe's fastest-growing Internet audience, according to a 2013 report by industry body comScore, and blogs have been seen by Putin's opponents as one of the few popular platforms beyond the Kremlin's reach.

The editor of a popular Internet news site, Lenta.ru, was dismissed this year and independent TV Dozhd has gone off the air. The head of VKontakte, Russia's answer to Facebook, has been ousted and fled the country.

The government has also blocked access to the Internet sites of Kremlin critics Alexei Navalny and Garry Kasparov because they "contained calls for illegal activity".

Navalny was one of the leaders of the anti-Putin protests of 2011-12, which were organised largely through social media sites and blogs. Navalny has further used his own blog to highlight state corruption and undermine United Russia in a campaign that helped establish him as an opposition leader.

Russia's leading blog platform, LiveJournal, appears to be standing up to the new rules.

The day after the blogging law was approved by the lower house, LiveJournal director Dmitry Pilipenko said the site would no longer display the number of subscribers a blog had if the figure exceeded 2,500.

Pilipenko said "all coincidences are accidental" but the timing of the announcement means many have seen the decision as a bid to protect LiveJournal's users. The decision followed a similar move by Russia's biggest search engine Yandex.


Highlights from Ed Snowden's NBC interview
Posted by seemorerocks at 14:33