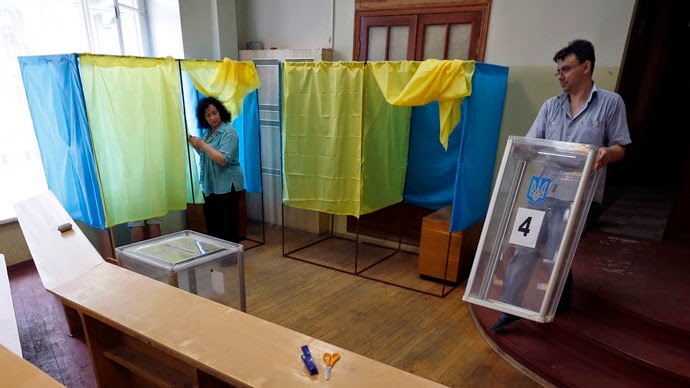 Ukraine’s Security Service claims that it has removed a virus at the Central Election Commission’s server, designed to delete the results of the presidential vote. According to the interior minister the cyber-attack may force a ‘manual vote count.’

“The virus has been eliminated, software is replaced. So, we now have the confidence that the Central Election Commission’s server is safe,” Valentin Nalivaychenko, SBU head, is cited by UNN news agency. He is cited as saying that the virus was meant to destroy the results of presidential election on May 25.

However the CEC programmers may not be able to fix the system in time for the elections, coup-installed Interior Minister Arsen Avakov announced on his website.
“On May 22 unknown intruders destroyed the 'Elections' information-analytical system of the Central Elections Commission, including those of the regional election commissions.”
“Criminal negligence of some of the CEC officials led to a very late reporting of this issue to the Ministry of Internal Affairs and Security Service,” Avakov wrote. As a result, “programmers so far failed to fix the CEC equipment,” the minister said announcing that fixing the problem in time for the vote count is “impossible.”
Avakov assured this is not a “catastrophe” and said that counting may be done manually, claiming this way Ukraine will have “more reliable results.”
At the same time, Nalivaychenko did not mention any intruders but claimed the harmful program was “illegally” installed on the server under the previous government of President Viktor Yanukovich, who was overthrown via an armed coup in February.
On Friday, UNN reported about a hacker attack, which made the Central Election Commission’s website inoperable for several hours.
The agency’s “informed source” claimed the perpetrators tried to steal data for the Commission’s sever and thereby disrupt the Sunday’s election.
However, the source failed to clarify how the information theft could affect the vote, saying that the lost data has to be analyzed first.
Just hours before the election, Ukraine’s Ministry of Internal Affairs has admitted that it cannot ensure the security of the elections in several cities in the Donetsk region, according to the deputy Minister of the Central Election Commission.
“Security cannot be ensured in Slavyansk, Kramatorsk, Krasniy Liman and Grushivka,” Sergey Yarovoy said, adding that the ministry established special operational headquarters to coordinate security issues with the CEC. Contact information of these Ministry of Internal Affairs’ centers has been provided to foreign observers due to cover elections in east Ukraine, Yarovoy says.
Earlier Vladimir Grinyak, the head of the Department of Public Safety in the Ukrainian Ministry of Internal Affairs acknowledged that only 17 out of 34 district election commissions in Donetsk and Lugansk regions are ready for polls.
“I think that 5 percent will still vote and 10 percent of the votes will be lost,” the head of the Committee of Voters of Ukraine Aleksandr Chernenko said. During the last presidential race in 2010, in Donetsk region 2,510 polling stations were active and handled 2.69 million voters. In Lugansk region, 1483 polling stations processed votes from 1.39 million people.
The two regions combined constitute roughly 14 percent of Ukraine’s eligible voters. At the same time in the other 12 regions of Ukraine the polling stations “have been secured” ahead of the vote, Grinyak added.
Twenty-one candidates will take part in the early presidential election in Ukraine, scheduled for Sunday, May 25. According to opinion polls, oligarch Petr Poroshenko enters the vote as favorite on 28 per cent, followed by ex-prime minister Yulia Tymoshenko on 9.5 per cent.   The country’s Donetsk and Lugansk regions, which rebelled against the coup imposed authorities and held independence referendums, declared they won’t be participating in the vote.