Info wars: More and more dirty details are coming out as the lies get worse and worse

An agreement to release details of communications between former British Prime Minister Tony Blair and ex-US President George W. Bush has been reached, promising to finally make public some extracts from sensitive conversations prior to the 2003 Iraq war. 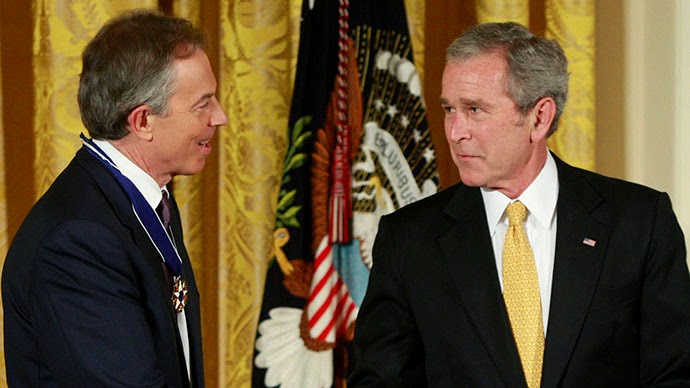 
The classified information is likely to be released as part of the Iraq inquiry – or Chilcot inquiry, after its chairman Sir John Chilcot – which was announced in June 2009 by Britain's then-Prime Minister Gordon Brown. The investigation aims to explore the UK's role in the Iraq war. The inquiry completed public hearings in 2011, and it was hoped the details would be delivered the same year.

The long-delayed details of the inquiry came one step closer to publication on May 29, when a deal was reached between the inquiry and the Cabinet Office on how to release confidential documents.

The problem concerned 25 so-called “notes,” more than 130 records of conversations between the two then leaders, and some 200 cabinet-level discussions. While the inquiry was originally focused on Blair's involvement in the war and aimed at learning lessons from the US-led invasion and its aftermath, the US reportedly opposed the publication of classified material concerning George W. Bush.

In a deal that has now been reached, the inquiry may be allowed to publish some quotes, but those will be kept to the "minimum necessary to enable the inquiry articulate its conclusions," and "consideration will be based on the principle that our use of this material should not reflect President's Bush views," Chilcot said.

Tony Blair has been previously blamed for blocking the release of the secret communications. He has repeatedly denied the accusations, saying: "I don't know what the reason for the delay is because I'm not in charge of the inquiry and not in charge of the Government," adding that he has "as much interest as anyone in seeing the inquiry publish its findings and then be able to go out and frankly restate my case and defend my position."

A national election will be held in Britain in May 2015, contested by David Cameron's Conservative party and the opposition Labour party – once led by Blair. It has been argued that the latter deliberately misled the public over the reason he decided to commit 45,000 British troops to the invasion in Iraq, as alleged former Iraqi President Saddam Hussein's illegal weapons of mass destruction have never been found.

The date of publication has yet to be agreed, and "detailed consideration of the gists and quotes requested by the Inquiry has now begun.” It is not yet clear how long that will take, Chilcot added.