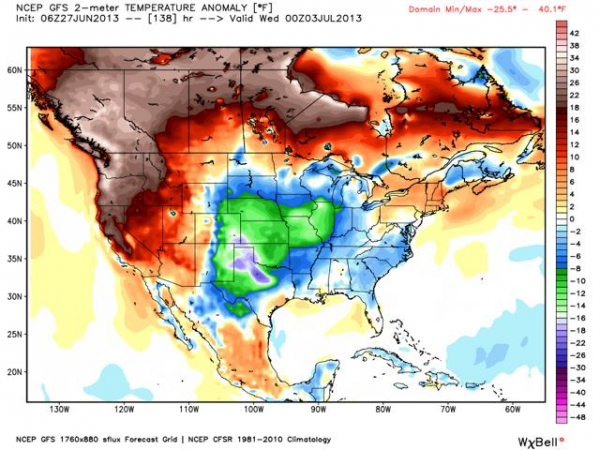 The weather forecast for the American West is startling. An extreme blocking pattern that has persisted there since last year is now set to hit its highest amplitudes yet, allowing a massive heat dome to grow and sprawl out over the west for an extended period. The result will likely be a deadly heatwave that could send temperatures rocketing high enough to shatter Earth’s all-time record.

This blast-furnace heat is forecast to begin this weekend with temperatures expected to reach 126 to 129 degrees (Fahrenheit) in Death Valley, California. This range is very close to the all time high record Earth temperature of 134 degrees. So even a minor intensification of this predicted heat wave could result in a new Earth temperature record.

Other regions in the West are also predicted to experience record heat. Temperatures for both Phoenix and Las Vegas are expected to exceed 110 degrees (F) and could also shatter records for these two cities.

Overall, a broad swath from the American west and up into Canada is expected to experience temperatures between 10 and 35 degrees Fahrenheit above average. A visual representation of this incredible heat spike is provided by Weather Bell via Climate Central:

The cause of this predicted record heat is a highly anomalous jet stream. ECMWF northern hemisphere temperature and pressure forecasts show the emergence of an above 30 degrees Celsius ‘heat dome’ forming at 5,000 feet over a large section of the American West.

Temperature differentials on this map also outline the high amplitude wave pattern developing from the western US all the way up through Alberta, Canada. By Wednesday, July 3, this hot pulse has driven 15 degree Celsius (60 degree Fahrenheit) 5,000 foot temperatures all the way to the Arctic Ocean. Such a hot air invasion, should it emerge as predicted, could result in daily surface highs near 80 degrees directly adjacent to a region of the high Arctic even as 110, 120, or perhaps 130 degree temperatures bake Las Vegas, Pheonix, and Death Valley.

You can see this hot, oily knife plunging from south to north over the US and Canada in the ECMWF forecast below:

Dramatic and dangerous alterations to the Northern Hemisphere Jet Stream are a result of a combination of sea ice loss and loss of snow cover of in the extreme north during spring and summer months. During May of 2013, both snow cover and Arctic sea ice volume were the third lowest levels ever recorded. As sea ice and snow cover erode, it allows more warm air invasions into the Arctic the result is an increased waviness and slowing down of the Jet Stream. Under the up-swell of these large waves, dangerous heat and dryness become more common events. In the path of the down-slope, we can expect to see increased cloudy, cooler, stormy conditions.

So even as the American West bakes under temperatures that could, at their core, be the highest values ever recorded on Earth, the East and Central US are setting up for a dangerously unstable condition that may generate extraordinarily powerful storms. The heightening wave in the Jet will dig deep into the Arctic, tapping cooler air and instability before it makes a powerful dive into the moisture and heat laiden region from Minnesota, Iowa and Arkansas eastward. Powerful thunderstorms, hail, flooding, tornadoes, and in the case where streams of the down-rushing Jet converge, derechos are all possibilities given this powerful and unstable north-south flow.

Very dangerous and unstable weather from a damaged and increasingly riled climate. We should do well to not only implement a rational Climate Action Plan, but to add a number of goals and increased efforts. We’re living in the age of consequences and each year of delay begs for more dangerous conditions