More than 170 people were treated for heat-related ailments and some towns and cities took emergency steps to protect the homeless and elderly as the U.S. West sweltered on Saturday in dangerous near-record, triple-digit temperatures 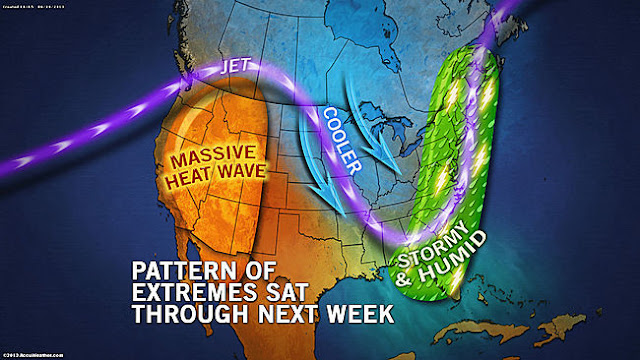 More than 170 people were "treated for heat-related injuries" and 34 more were sent to local hospitals while attending an outdoor concert on Friday afternoon in Las Vegas, Nevada, where temperatures soared to 115 degrees Fahrenheit (46 C), said Erik Pappa, a spokesman for Clark County. On Saturday, highs are expected to reach 117 (47 C).

"It involves pretty much the entire West Coast at this point," Lericos said, adding that the steamy conditions, which began in some pockets on Thursday afternoon, will likely continue throughout the weekend and linger into next week.

Temperatures were well into the triple-digits in most of the area, except in higher elevations.

In Death Valley, one of the hottest places on earth, temperatures could soar on Saturday to 128 F (53 C), close to the daily record set in 1994. Other areas in and around the Mojave Desert will see triple-digit temperatures.

The "exceedingly high temperatures" can cause potentially fatal heat stroke, Lericos said, noting that those with no air-conditioning or who must work outdoors were particularly at risk.

In an effort to safeguard hundreds of homeless in Phoenix, where temperatures could hit 120 F (48 C) on Saturday, emergency shelters are temporarily adding 150 beds.

The National Weather Service said the heat warning remains in place through Sunday, and could be extended into next week should the conditions persist.

Areas in the more temperate Pacific Northwest, such as Seattle and Spokane, Washington, and Pendleton, Oregon, face hot weather over the weekend and early next week as the heat moves northward, Lericos said.

Heat wave strikes western US as temps approach 120 in Phoenix, Las Vegas
A man died and another was hospitalized in serious condition Saturday afternoon in heat-aggravated incidents as a heat wave blistered this sunbaked city and elsewhere in the Southwest.

Phoenix hit 119 degrees by mid-afternoon, breaking the record for June 29 that was set in 1994. And large swaths of California sweltered under extreme heat warnings, which are expected to last into Tuesday night — and maybe even longer.

The forecast for Death Valley in California called for 128 degrees Saturday, but it was 3 degrees shy of that, according to unofficial reports from the National Weather Service. Death Valley’s record high of 134 degrees, set a century ago, stands as the highest temperature ever recorded on Earth.

Las Vegas fire and rescue spokesman Tim Szymanski said paramedics responded to a home without air conditioning and found an elderly man dead. He said while the man had medical issues, paramedics thought the heat worsened his condition.

Paramedics said another elderly man suffered a heat stroke when the air conditioner in his car went out for several hours while he was on a long road trip. He stopped in Las Vegas, called 911 and was taken to the hospital in serious condition.

The heat wave has sent more than 40 other people to hospitals in Las Vegas since it arrived Friday, but no life-threatening injuries were reported.

“We will probably start to see a rise in calls Sunday and Monday as the event prolongs,” Szymanski said in a statement. “People’s bodies will be more agitated the longer the event lasts and people may require medical assistance.”

The forecast for Death Valley called for 128 degrees, but temperatures topped at 125, according to unofficial reports from the National Weather Service. Death Valley’s record high of 134 degrees, set a century ago, stands as the highest temperature ever recorded on Earth.

About 100 miles south in Baker, the temperature peaked at an unofficial 117 degrees in the road tripper’s oasis in the Mojave Desert on Interstate 15. The strip of gas stations and restaurants between Los Angeles and Las Vegas is known by travelers for the giant thermometer that often notes temperatures in the triple digits.

Elsewhere in Southern California, Palm Springs peaked at 122 degrees while the mercury in Lancaster hit 111 — a record.

In Northern California, record-breaking temperatures were recorded in Sacramento, where the high was 107 degrees; Marysville, which sweltered in 109 degrees; and Stockton, which saw 106.

Cooling stations were set up to shelter the homeless and elderly people who can’t afford to run their air conditioners. In Phoenix, Joe Arpaio, the famously hard-nosed sheriff who runs a tent jail, planned to distribute ice cream and cold towels to inmates this weekend.

Officials said personnel were added to the Border Patrol’s search-and-rescue unit because of the danger to people trying to slip across the Mexican border. At least seven people have been found dead in the last week in Arizona after falling victim to the brutal desert heat.

Temperatures are also expected to soar across Utah and into Wyoming and Idaho, with triple-digit heat forecast for the Boise area. Cities in Washington state that are better known for cool, rainy weather should break the 90s next week.

The heat was so punishing that rangers took up positions at trailheads at Lake Mead in Nevada to persuade people not to hike. Zookeepers in Phoenix hosed down the elephants and fed tigers frozen fish snacks. Dogs were at risk of burning their paws on scorched pavement, and airlines kept close watch on the heat for fear that it could cause flights to be delayed.

Meanwhile on the East coast -

East US Poised for Flooding 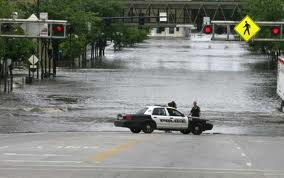 An increasing frequency of downpours, on top of already locally heavy June rainfall, will raise the threat of flooding in part of the eastern third of the nation into the first week of July.

Initially, downpours will tend to be isolated and flooding will be limited to urban, poor drainage areas and right along small streams.

However, as the pattern continues to evolve and a swath of tropical downpours stalls in the region, flooding problems can become more extensive and common.

Many locations along the Atlantic Seaboard have already received double and triple their normal rainfall for June in absence of the upcoming weather pattern.

Some communities in the Midwest got a taste of what such a weather pattern can deliver Tuesday night into early Wednesday. Later Wednesday, flooding extended into parts of Pennsylvania and upstate New York.

Isn't this is the area that is experiencing a heat wave?