It couldn't have anything to do with extreme and weird weather all over the globe, could it?

Hazy skies over Singapore unleash arsenal of hailstones
Rain is neither toxic nor acidic, and not caused by cloud-seeding in Indonesia, says NEA 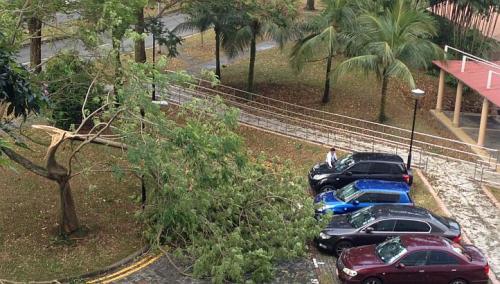 SINGAPORE – The rain that had fallen over parts of Singapore this afternoon (June 25) is neither toxic nor acidic, said the National Environment Agency (NEA).

It is also not due to cloud-seeding in Indonesia, said the NEA’s metereologist Patricia Ee in today’s daily haze briefing. She said that rain clouds could not have crossed over from Indonesia as it is too far away.

After a dry spell lasting several days, rain fell in Singapore this afternoon, with reports of hailstones falling in western areas like Chua Chu Kang, Bukit Batok and Jurong East.

According to the NEA, this is the first time in five years hail has been reportedly seen in Singapore. On March 27, 2008, hailstones rained over the central part of Singapore.

Several social media users sent in pictures of the ice. Some wondered if the cloud seeding operation in Indonesia was the cause.

Hail, which comprises of irregular lumps of ice, forms in strong thunderstorm clouds, when supercooled water droplets freeze on contact with condensation nuclei.

While it is uncertain if haze causes hail, Ms Ee said that the intense thunder clouds this afternoon created the right conditions for hail to form. Any kind of particles, such as haze or dust, can cause condensation nuclei, which could then lead to ice formation.

In a Facebook post, Minister for Environment and Water Resources Vivian Balakrishnan said: “Heavy but short thunderstorm, especially in the western parts of Singapore brought some hailstones.”

“No, we did not do cloud seeding,” he added.

Earlier today, the NEA said moderate to heavy thundery showers with gusty wind were expected over southern, eastern and central areas of Singapore between 3.25pm and 4.25pm.

Meanwhile, a caller to the MediaCorp hotline, Mr Bai, said that about three trees had fallen along the PIE, near the Bukit Batok exit towards Changi, crashing into several cars during the rain.

The SCDF said it received calls near 3pm requesting for assistance. Rescue tools were used to release the trapped people in the cars and no injuries were reported. A fire engine, red rhino and ambulance were sent to the scene.