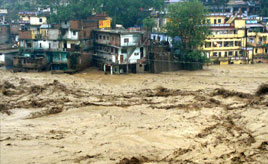 Bad weather is suspected to have led to the crash of the newly-acquired Russian-built Mi-17V5 helicopter. The chopper went down north of Gaurikund, the base camp for the trek to Kedarnath, at around 12.30pm, an IAF spokesperson said. There were five IAF, six Indo-Tibetan Border Police and nine National Disaster Relief Force personnel on board. Only eight bodies have been recovered so far.

“Why are the Gods so angry that they are even killing the saviours who are rescuing the sea of humanity in Uttarakhand?” an IAF squadron leader blurted out on hearing of the crash. The IAF, however, said sorties would continue.

The crash added to the gloom on a day when nearly 8,000 persons — most of them at Harsil and Badrinath — couldn’t be evacuated with cloudbursts and torrential rains battering rescue efforts for the second day running. The number of helicopter sorties dropped from 300 just three days back to 53 on Tuesday but the state government assured the Supreme Court that evacuation would be completed within 72 hours. Rescuers managed to get 1,000 people to safety despite hostile weather conditions. 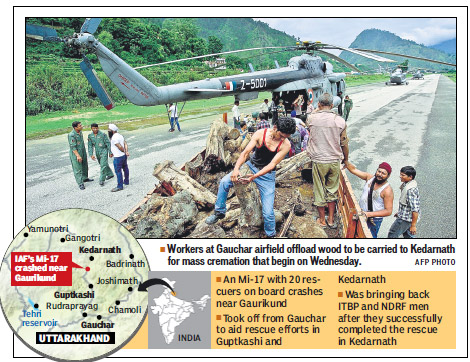 The Mi-17 took off from Gauchar, off the Rishikesh-Joshimath axis, to aid rescue efforts in Guptkashi and Kedarnath, which has been battered by flashfloods of June 15 and 16. It was bringing back ITBP and NDRF men after they successfully completed the rescue effort in Kedarnath.

The crashed chopper had made two successful sorties to Kedarnath during the day. This is the second helicopter accident in the state in a week. A private chopper carrying relief material crashed on Sunday near Gaurikund, but there was no loss of life.

“The nation mourns with me the loss of our heroes whose selfless work has saved thousands of lives,” Prime Minister Manmohan Singh, who is on a two-day visit to Jammu and Kashmir, said.

The death toll rose to 822 with 142 bodies being found, including 127 in Kedarnath, officials said. A few days ago, the chief minister had put the number of dead at 1,000, which locals and rescuers say is a conservative figure as damage has been extensive and thousands of people remain unaccounted for even after 10 days.

Rain brought more destruction on Tuesday, with two cloudbursts reported from Almora and Devprayag districts. Three people were killed and many houses flooded. Rescue operations had to be put on hold in Badrinath and Gangotri areas, where 6,000 people are stranded.

The next two days, too, hold out little hope, with the meteorological Centre, Dehradun warning of heavy rainfall at some places. “Besides heavy rains, the met centre has also predicted moderate to rather heavy rain and thundershowers at many places,” Anand Sharma, director, metrological department, said.

Rain also delayed mass cremation of bodies which is now expected to start on Wednesday. The IAF, army and local administration launched a massive operation to send firewood and fuel for conducting last rites of those killed in the Kedarnath Valley. DNA samples of the dead will be preserved for their identification, a senior police official said.

India holds mass cremation of flood victims to stem disease
Hundreds of corpses have been lying in out the open for almost ten days. 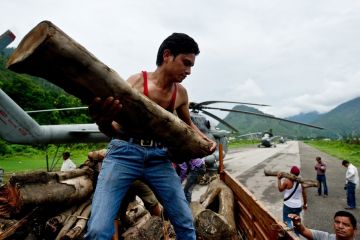 
Indian authorities are due to hold a mass cremation ceremony on Tuesday to dispose of the corpses of hundreds of flood victims still lying in the north Indian state of Uttarakhand.

Another 127 bodies have been recovered since Monday from the area around the ruined Hindu pilgrimage town of Kedarnath, officials told India's Daily News & Analysis newspaper, taking the death toll to 807. Most if not all of the corpses have been lying in the open for nine days, since a flash flood destroyed everything but the temple itself on June 16.

As bad weather hampers efforts to rescue survivors, removing bodies from the site is not possible, and delaying their disposal to allow for the identification and individual cremation of the victims would leave survivors in the area vulnerable to an outbreak of disease, the Times of India cited local officials as saying.

DNA samples will be taken and the bodies will be videotaped before they are cremated, so that family members can confirm the identity of the victims at a later date.

Home Minister Sushilkumar Shinde consulted high-ranking Hindu priests to determine whether a mass cremation would pollute the Kedarnath temple—a 1200-year-old structure that attracts tens of thousands of pilgrims to the town each year.

According to the religious experts, as long as the cremation ceremony is performed in keeping with Hindu practices, the temple will not be harmed.

That means not only that various religious rites must be performed, but also that more than 30,000 pounds of lumber must be brought up to the cremation site by helicopter. Moreover, before many of the dead can be cremated, they must be dug out from under silt and destroyed buildings, a process that experts said could take a week or more.

On Tuesday, the Uttarakhand government told the Supreme Court that the evacuation of people stranded by the floods would be completed within 72 hours.

Air force helicopters, Indian army troops and other rescue workers have evacuated thousands of people per day since the relief effort began. Initially, estimates pegged the number of stranded at around 70,000 people.

It's feared the final death toll will stand at over 5,000, according to Disaster Management Minister Yashpal Arya. 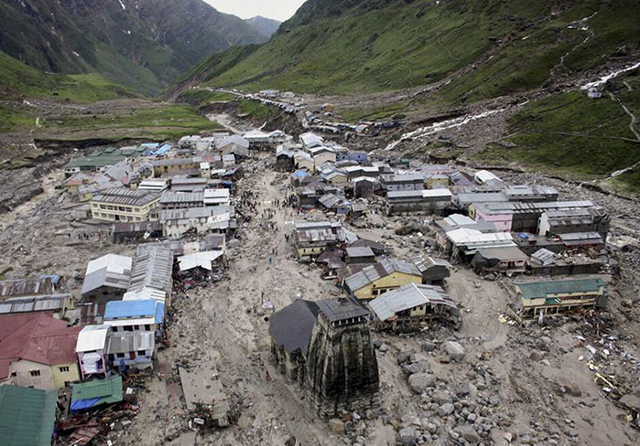 Rain and landslides have limited efforts to rescue the victims of floods in the northern Indian state of Uttarakhand. Military helicopters were unable to fly there for most of Monday, and the Indian Meteorological Department warned of “very severe” rain in the next three days. Several roads were further damaged by new landslides. Thousands of stranded pilgrims and villagers in flood-stricken areas remained in need of food and medicine. Five thousand pilgrims have been stuck for more than a week in Badrinath, a major pilgrimage center in the mountains. In New Delhi on Monday, India’s home minister, Sushil Kumar Shinde, said that more than 1,000 flood victims could be found dead once debris was removed. That number was considered a very conservative estimate. It was widely feared that the dead would number in the thousands. The Indian government was making preparations for mass cremations of the victims.


INDIA'S "CLIMATE-CHANGE REFUGEES" FLEE RISING MONSOON FLOODING
In 2012, out of the millions of people displaced by natural disasters around the world, over a quarter were from northeast India. Almost nine million inhabitants were forced to flee the region's devastating monsoon. 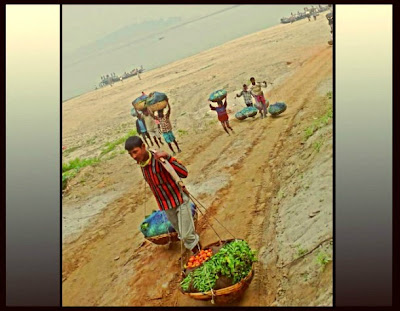 These forced displacements are a common occurrence. Floods have become so routine in Assam, a state located at the foothills of the Himalayas, irrigated by one of the world’s mightiest river – the Brahmaputra – that a special administrative post was created to deal with natural disasters. “Most flood victims flee to temporary shelter and wait for the water to flow back, then they just go back home, it’s the same thing every year,” explains Harendra Nath Borah, the functionary in charge of natural disasters.

The monsoon was particularly intense in 2012. And the severity of flooding could increase in the next few years under the effects of global warming and the because of the construction of new infrastructures near the Brahmaputra, which put the lives of millions at risk.

Swollen by the monsoon rains, this 2,900 kilometer-long river that takes its source in Tibet and flows through India and Bangladesh all the way to the Bengal Gulf is the reason why the region is unsafe. Legend has it that the river was born of one of Hindu God Vishnu’s incarnations who, after having murdered his mother, washed away his sins in a lake. That alone is enough to induce fear into the hearts of local inhabitants, who even call the river “blood” in the Assam idiom. It can become over 13 kilometers wide, and its flow is one of the fastest in the world. But between two monsoons, its land is so fertile that it attracts many farmers. Given the high demographic pressure, more and more people are looking to settle there permanently.

“The construction of infrastructures on land that belongs to the river increases the risks of severe flooding in areas that used to be spared until then,” explains Ashvin Gosain, professor at the New Delhi Indian Institute of Technology. During the monsoon, the buildings prevent the soil from absorbing the water and divert the stream, sometimes a little too impetuously, toward populated areas. When that happens, it turns into a devastating flood.

Deforestation along the river also promotes the deposit of sediments. The Brahmaputra overflows more frequently and its banks are disappearing as a result of erosion. According to Indian Minister For Water Resources Harish Rawat, 1,850 Indians drown each year because of the floods.

The surface area of the largest river-island in the world, Majuli, on the Brahmaputra, has lost half its size to erosion since 1950. Most of its inhabitants now live in bamboo huts on stilts, which are easy to rebuild after each flood.

Others have already left the region.

Experts fear that the floods are going to continue to get worse over the next few years because of global warming. In the heights of the Himalayas, the glacial lakes, which are fed by melting glaciers, threaten to overflow the natural levees that were containing them. At the slightest earthquake and pressure of the water, their walls could give, creating “mountain tsunamis” strong enough to wipe out everything in their path. Satellite photos show at least 320 glacial lakes in Sikkim, an Indian state located in the Himalayas. The populations living in these high-altitude regions are the most vulnerable.

A rise in temperatures could also lead to more intense monsoon precipitations. “In some regions, increases in heavy precipitation will occur despite projected decreases in total precipitation in those regions,” wrote the Intergovernmental Panel on Climate Change (IPCC) in its 2012 special report.

A report by the Indian Ministry of Environment and Forests goes even further. The report says “all the regions show an increase in the flooding varying between 10 to 30% of the existing magnitudes. This has a very severe implication for the existing infrastructures such as dams, bridges, roads, etc, for the areas, and shall require appropriate adaptation measures to be taken up.”

If the floods worsen, the Indian government will need to engage in a daunting task: to consolidate and resize the many dams of the Brahmaputra. Another solution would be to dig canals and reservoirs by the river to absorb the flow, store water and reduce the risk of destructive floods

The room for manoeuver is limited. India is not the only country that wants to regulate the flow of this river, which takes its source in China. In addition, any intervention on the Brahmaputra has the effect of changing the direction and power of the current as well as the sediment transportation and ultimately the downstream route of the river. Not to mention the fact that during monsoon season the flow of the river reaches 50,000 cube-meters per second, and can hardly be contained.

“Such a force of nature cannot be tamed by man. It is better to adapt by first reducing the residential areas around the Brahmaputra,” says Professor Gosain.

The Indian government is aware of the risks to the population. In 2006, it created an authority tasked with the management of natural disasters, which launched a flood warning system.

Though it might have little power to limit the number of people displaced by Climate Change, India can at least start by saving lives.