A nice play-on-words in the headline. This is the only (printable) response posssible to the Obama speech. 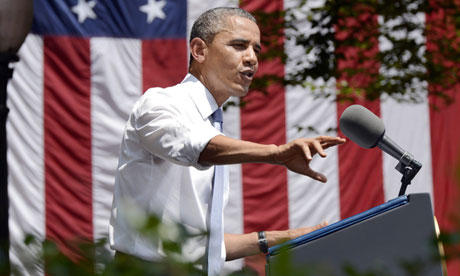 But the new climate strategy remains fatally compromised by Obama's unflinching commitment to the maximum possible exploitation of fossil fuels - a contradiction that has set the world on course to trigger unmitigated catastrophe in coming decades.
Central to the plan is Obama's reiteration of his commitment to cutting US greenhouse gas emissions 17% from 2005 levels by 2020. But this target is too little, too late - amounting to only a 4% cut in emissions compared with 1990 levels.
Even before this target was enshrined into US law, scientists warned that the pledge "will not be enough to head off dangerous climate change" as global temperatures would still breach the 2C target accepted by governments as the safe limit for global warming.
Indeed, one study found that:
"The pledges on the table will not halt emissions growth before 2040... Instead, global emissions are likely to be nearly double 1990 levels by 2040 based on present pledges."
A new study by Climate Action Tracker (CAT) out this month concludes that full implementation of the pledges would still lead to a 3.3C rise by 2100. Based on actual climate policies so far, however, CAT warned that governments are "less likely than ever to deliver on the Copenhagen pledges." If this continues, temperatures could exceed 4C by the end of the century, triggering positive feedbacks leading to further warming.
In the mix of Obama's plan are nuclear power and 'clean coal' technologies, all of which have huge questions marks over their ability to mitigate greenhouse gas emissions. And though Obama promised to only ratify the Keystone XL pipeline if its "net effect" does not "significantly exacerbate" carbon pollution (which it already does), exploiting America's domestic shale oil and gas reserves through fracking remains an integral part of the new plan.
The defunct "net effect" argument has already been used to legitimise shale gas, officially touted as a clean bridge fuel. But shale gas is far from clean. In 2011, the first comprehensive analysis of emissions from shale gas in the journal Climatic Change found that:
"The footprint for shale gas is greater than that for conventional gas or oil when viewed on any time horizon, but particularly so over 20 years. Compared to coal, the footprint of shale gas is at least 20% greater and perhaps more than twice as great on the 20-year horizon and is comparable when compared over 100 years."
In an updated analysis published last year, the study authors reiterated these findings:
"... for most uses, the GHG footprint of shale gas is greater than that of other fossil fuels on time scales of up to 100 years. When used to generate electricity, the shale-gas footprint is still significantly greater than that of coal at decadal time scales but is less at the century scale... We reiterate our conclusion... that shale gas is not a suitable bridge fuel for the 21st Century."
What about nuclear power? A 2008 study in the International Journal of Nuclear Governance, Economy and Ecology pointed out that the construction, mining, milling, transporting, refining, enrichment, waste reprocessing/disposal, fabrication, operation and decommissioning processes of nuclear power all release fossil fuel emissions. Also, nuclear power is not efficient enough to replace oil, gas and coal. To do so nuclear production would need to increase by 10.5 per cent every year from 2010 to 2050 - an "unsustainable prospect" requiring a "cannibalistic effect", whereby nuclear energy itself must be used to supply the energy for future nuclear power plants.
Study author Dr. Joshua Pearce further argued last year that unless nuclear power adopts "improved technology and efficiency through the entire life cycle to prevent energy cannibalism during rapid growth", the industry could "face obsolescence" compared to renewables. And a new report by the Berlin-based Energy Watch Group warns of a "high risk of a uranium supply gap for nuclear reactors before 2020."
What about carbon capture and storage (CCS), where we burn fossil fuels, but capture the carbon dioxide and 'sequester' it back underground? Some suggest we could capture half the world's emitted carbon in this way by the 2040s.
Unfortunately, it sounds too good to be true - and it is. As environmental scientist Vaclav Smil calculates, to sequester just a fifth of current CO2 emissions:
"... we would have to create an entirely new worldwide absorption-gathering-compression-transportation- storage industry whose annual throughput would have to be about 70 percent larger than the annual volume now handled by the global crude oil industry whose immense infrastructure of wells, pipelines, compressor stations and storages took generations to build."
The financial and energy costs of CCS are therefore meteorically unsustainable.
The problem here is simple. Obama's new climate plan, however well intentioned (or not), is tied to fatally flawed energy politics. The world needs a climate strategy based on science - not wishful thinking inspired by the fossil fuel and nuclear lobbies.