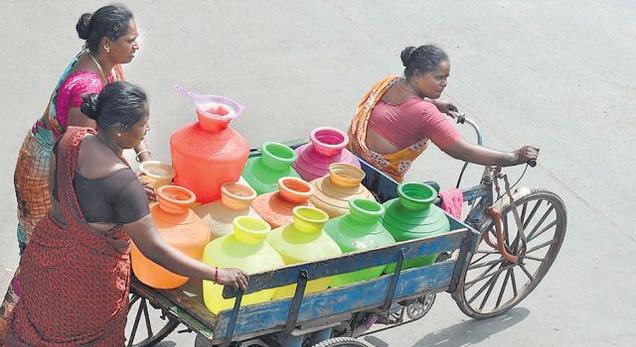 In Kondungaiyur, the neighbourhood’s alarm clock is the whistle of a private water lorry operator. After several days of going without water, for residents here, the whistle is a welcome sound. As soon as it blows out, dozens of residents scramble around it, armed with pots and vessels, for their share.

The next hour is frenzied as people bring in as many pots as they can, gather around the tanker and impatiently shove their pots under the hose for water. This scene in played out in various pockets of the city, where residents often have no choice but to pay Rs. 6 for a pot of water.

Fast-drying lakes, failing water sources and dipping groundwater levels have led to a drastic drop in the water supply that the city’s residents enjoyed uninterrupted, up until a few months ago. Left with little choice, many of them have turned to private water tankers to meet their daily needs.

B. Subramanian of Kodungaiyur is among hundreds of residents who spend many sleepless nights wondering whether there will be water to drink and bathe in the next day.

“Just getting this private lorry to come here was a huge task. Their customer base has increased manifold, and they do not come regularly. We have to keep calling them over and over again,” he said.

Slashing of piped water supply by half to 390 million litres a day (mld) and erratic tanker water supply has triggered protests in residential areas across the city.

Residents of Vysarpadi walk at least half a kilometre to the nearest hand pump as early as 3.30 p.m. to fetch water. “Even by then, at least 30 persons are waiting for their turn,” said R. Anu, a resident of B-Kalayanapuram.

Is this a drought?

With every water source failing, the situation brings back memories of the drought a decade ago, when lorries were the lifeline for drinking water supply. In 2003, Chennai Metrowater started piped supply on alternate days in the city and the next year, this was suspended completely for eight months.

After nearly a decade, alternate day supply started in May this year and the number of lorry trips was increased to 3,700 trips a day.

However, residents say they wait up to five days even after booking paid Metrowater tankers. M.S. Kannan, a resident of Anna Nagar West said, “Piped supply has become erratic. Nearly 900 flats in my apartment complex depend on Metrowater’s paid tanker supply but it takes at least five days to come.”

Villages to the rescue

Borewells in the villages of neighbouring districts are now the main source of supply, both for Metrowater and private tankers. Metrowater draws water from its well fields in Minjur, Poondi and Tamaraipakkam and private water tankers travel up to Ponmar in Kancheepuram district and Karanodai in Tiruvallur district to source water.

While some villagers view this as a means to exploit their resources to quench the city’s thirst, others are eagerly waiting for Chennai Metrowater or private tankers to approach them, as they make money from these transactions.

Rajendran, a farmer from Kottaikuppam, said: “Many villagers sold water in their agricultural wells during the drought 10 years ago. Agriculture is no longer a viable occupation in my village. I will earn at least Rs. 15,000-Rs.20,000 a month by selling water. But there are people who are against this.”

Krishna water from Kandaleru reservoir, Andhra Pradesh, to be released next week is the authorities’ only hope to tide over the current drought-like situation. Chennai Metrowater has drawn a contingency plan to tackle the crisis.

It plans to tap 55 more mld of water from Neyveli apart from the 25 mld already being sourced from there. Metrowater also plans to sink 676 borewells across the city to provide water through hand pumps and street tanks.

Sources in Metrowater said the water shortage may be alleviated next month and water from Veeranam Lake is expected to be supplied from August.

Posted by seemorerocks at 21:11