Bulgaria’s Parliament cancels sitting because of lack of quorum, amid protests

Anti-government protests in Bulgaria took on a new shape on the morning of June 26 as protesters gathered outside Parliament to drink coffee, a variation on the routine of the past two weeks of evening gatherings to march around Sofia to demand the resignation of the government.

More than 1000 people were outside Parliament, while inside, the parties in government could not gather enough MPs for a quorum and the planned parliamentary sitting for the day was cancelled.

It is not easy to get a quorum because the largest single party in Parliament, Boiko Borissov’s centre-right party GERB, is boycotting proceedings and is willing to attend only if electoral law changes are to be discussed.

This morning’s protest was peaceful although there were some instances of tomatoes being thrown at the parliamentary building. Politicians, including Cabinet ministers, who arrived for the sitting were booed.

At one point, a Bulgarian socialist party MP, Maya Manolova, came out to try to speak to the protesters but this was a failed attempt. The protesters reject the government that was formed in May as utterly discredited from the outset, and want its resignation, along with new electoral laws and constitutional reforms.

Among the business of Parliament that could not proceed today was the vote on the nominated third deputy prime minister, Daniela Bobeva, who has been put forward by the BSP government to be responsible for economy-related issues.

Separately, meanwhile,a well-known poet, intellectual and former MP, Edvin Sugarev, has announced that he is going on hunger strike and will resume eating only if the current government resigns. 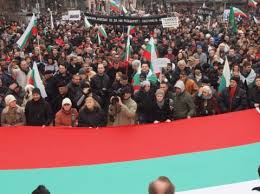 Bulgarian socialist party leader Sergei Stanishev gave the first hint on June 26 that the resignation of the Plamen Oresharski government – the main demand of anti-government protests now in their 13th day – could happen in the near future.

However, such a decision would not be the result of caving under the protesters’ pressure, but because Parliament could not function properly, he said.

Speaking to reporters after the June 26 sitting of Parliament was cancelled because of lack of quorum, Stanishev said that unless ultra-nationalist party Ataka returned to the parliamentary benches, the only solution was snap parliamentary elections.

“If tomorrow Ataka says that they will not participate in Parliament’s work, this changes the situation and creates the conditions for early elections, for which we are ready,” Stanishev said. Asked how long the socialists and their coalition partners, the Movement for Rights and Freedoms (MRF), were prepared to wait for Ataka’s decision, Stanishev said: “We will not wait long.”

Bulgaria held parliamentary elections in May, producing a hung parliament. The Bulgarian Socialist Party and MRF have 120 MPs in the 240-seat legislature, enough to endorse the Oresharski cabinet – the one additional MP registration necessary for quorum on the day the cabinet was voted, May 29, came from Ataka leader Volen Siderov.

Ataka MPs have provided the necessary quorum in the weeks since then, given that GERB – the party of former prime minister Boiko Borissov – has refused to participate in Parliament sittings. Despite winning the most votes and having the largest group in Parliament, 97 MPs, GERB found no coalition partners to form a government.

There was no official statement from Ataka on June 26 regarding its intentions, but one MP for the party, Yavor Notev, said that Parliament should not sit until “normal conditions” for its work could be re-established.

Notev was referring to the protest outside Parliament earlier that morning, when an estimated 1000 people gathered “to drink their morning coffee”. Tomatoes and eggs were thrown at the Parliament building, while politicians who arrived for the sitting were booed; later, the cars of Cabinet ministers leaving the sitting required police assistance to move through the throng of protesters.

Although the House did not sit on June 26, the parliamentary floor was put to use in the afternoon, when Parliament’s Deputy Speaker Maya Manolova presided over a meeting with NGOs to discuss proposals for Electoral Code amendments.

Manolova, who was soundly booed in the morning, when she attempted to speak to the protesters outside Parliament, said that the meeting was opened to all civil society groups that wished to have a say in electoral legislation changes.

Suggestions made by participants ranged from lowering the number of signatures that prospective candidates need to gather for registration and reduced bank deposits to the introduction of electronic voting. Some participants also suggested a switch from the current proportional representation system to a majoritarian system or a mixture of the two. One proposal even went as far as to suggest changing the constitution to restrict universal suffrage by introducing educational restrictions.

However, it was not clear how future meetings on the issue would proceed and which suggestions would be passed on as recommendations to MPs.

Meanwhile, a group of 14 influential civil society NGOs and think-tanks said in a joint statement that they would not attend such meetings, demanding the resignation of the Oresharski government and holding parliamentary elections no later than October. In the same statement, the group outlined its own suggestions for Electoral Code changes.