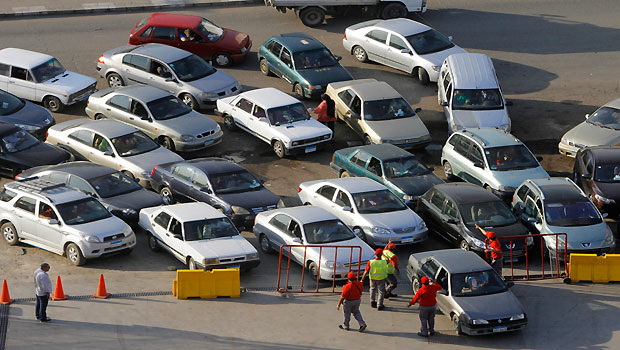 Egypt continues to face a deteriorating fuel crisis with the capital, Cairo, particularly hard hit, resulting in long lines of cars queuing up in front of gas stations blocking traffic.

The Ministry of Petroleum initially dismissed the crisis as non-existent.

“What has been said about the shortage of oil, diesel, and other mineral materials is not true,” Sherif Hadarra, the minister of petroleum, was quoted as saying to the state-run MENA news agency.

However, Egyptian president Mohamed Mursi apologized for fuel shortages in a speech marking his first year in office. Mursi blamed the fuel crisis on unfounded media speculation and the illegal hoarding of fuel by some gas stations. Responding to the problems, the president announced a decision to withdraw the licenses of any gas station shown to be hoarding fuel. Mursi also ordered Egypt’s supply ministry to ensure that gas stations are operating “in the public interest.”

Speaking before the president’s speech, Egypt’s petroleum minister said that a technical problem in fuel supplies in Cairo led to delays in fuel reaching gas stations on Monday. He added that the problem will be solved by providing all gas stations with extra amounts of fuel “within days.”

However, a petroleum official, speaking to Asharq Al-Awsat on the condition of anonymity, said that the crisis had begun several months ago but worsened over the past few days, particularly in Cairo.

Dr. Hussam Arafat, head of the petroleum section in the Federation of Egyptian Chambers of Commerce (FEDCOC), confirmed that there is a fuel shortage in Egypt, adding that he had “warned against this crisis since March, but no one listened.”

Arafat added, “The crisis has been there for months. It eased in the capital and this has a political dimension given the unrest in Cairo and the government’s attempt to appease the public. As for the rest of provinces, they have suffered for a long time from the [crisis].”

In August the government will introduce a smart-card system to provide cars with fuel in hopes of combating smuggling and saving approximately EGP 35 billion (USD 5 billion). The new system will not ration fuel, however.

Arafat stressed that implementing a system that does not ration fuel will open the door to smugglers and increase fuel consumption in Egypt. He added that the government ended fuel rationing in a bid to woo the public.

Arafat confirmed that gas stations will not close on June 30 despite fears of thugs exploiting expected nation-wide protests to attack workers and illicitly obtain fuel to sell on in the black market.

Total governmental subsidies in the first nine months of the current financial year are estimated at EGP 98.4 billion (USD 14 billion), 62 percent of which (EGP 72.2 billion) went on petroleum products. The total energy subsidies will reach approximately EGP 100 billion next year with the ministry of petroleum demanding they be increased to EGP 120 billion


And in neighbouring Gaza...

As Gaza heads for water crisis, desalination seen key
A tiny wedge of land jammed between Israel, Egypt and the Mediterranean sea, the Gaza Strip is heading inexorably into a water crisis that the United Nations says could make the Palestinian enclave unliveable in just a few years. 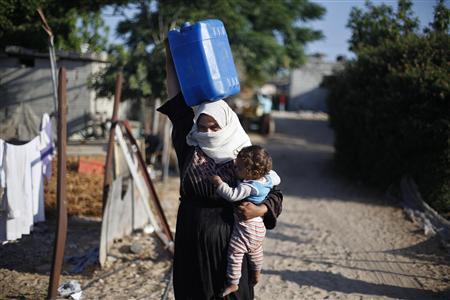 With 90-95 percent of the territory's only aquifer contaminated by sewage, chemicals and seawater, neighborhood desalination facilities and their public taps are a lifesaver for some of Gaza's 1.6 million residents.

But these small-scale projects provide water for only about 20 percent of the population, forcing many more residents in the impoverished Gaza Strip to buy bottled water at a premium.

The Gaza Strip, governed by the Islamist group Hamas and in a permanent state of tension with Israel, is not the only place in the Middle East facing water woes.

A NASA study of satellite data released this year showed that between 2003 and 2009 the region lost 144 cubic km of stored freshwater - equivalent to the amount of water held in the Dead Sea - making an already bad situation much worse.

But the situation in Gaza is particularly acute, with the United Nations warning that its sole aquifer might be unusable by 2016, with the damage potentially irreversible by 2020.

Only five to 10 percent of the aquifer's water is presently deemed safe to drink, but even this can mix with poor quality water during distribution, making it good only for washing.

"The tap water from the municipality is not fit to drink, and my husband is a kidney patient," said Sahar Moussa, a mother of three, who lives in a cramped, ramshackle house in Khan Younis in the southern Gaza Strip, near the Egyptian border.

She spends 45 shekels ($12.50) each month - a large sum for most Palestinians in the area - to buy filtered water that she stores in a 500-litre plastic tank.

Further complicating the issue is Israel's blockade of the Gaza Strip, which activists say has prevented the import of materials needed for repairs on water and waste facilities. Israel says the blockade is needed to prevent arms from reaching Hamas, which is opposed to the existence of the Jewish state.

The United Nations estimates that more than 80 percent of Gazans buy their drinking water.

"Families are paying as much as a third of their household income on water," said June Kunugi, a special representative of the U.N. children's fund UNICEF.

With no streams or rivers to speak of, Gaza has historically relied almost exclusively on its coastal aquifer, which receives some 50-60 million cubic meters of refill each year thanks to rainfall and runoff from the Hebron hills to the east.

But the needs of Gaza's rapidly growing population, as well as those of the nearby Israeli farmers, means an estimated 160 million cubic meters of water is drawn from the compromised aquifer each year. As the levels sink, seawater seeps in from the nearby Mediterranean.

This saline pollution is made worse by untreated waste, with 90,000 cubic meters of raw sewage allowed to flow into the shallow sea waters each day from Gaza, according to U.N. data.

Even with the aquifer, regular running tap water is a luxury unknown to many Gazans. Locals across the territory say that during the summer months water might spurt out of their taps every other day, and the pressure is often so low that those living on upper floors might see just a trickle.

Many families have opted to drill private wells drawing from water deep underground.

Authorization is required but rigid restrictions means most households dig their wells in secret. Hired laborers erect large plastic sheets to try and hide their work from prying neighbors.

"As you can see, this is like a crime scene," said a 45-year-old father of six, who gave his name as Abu Mohammed.

A clothes merchant from Gaza city, he paid his clandestine, 7-strong crew 12,700 shekels ($3,513) to drill a well and came across water at a depth of 48 meters. "We begin the work after sunset and ... cover the sound of digging with music," he said.

A senior Israeli security official estimates that as many as 6,000 wells have been sunk in Gaza, many without authorization.

While Israel shares the polluted aquifer, which stretches all the way to Caeserea, about 60 km north of Tel Aviv, the problem is less acute than in Gaza which is downstream. In addition, Israel can access water from the Sea of Galilee and the mountain aquifer that also spans the West Bank.

As Gaza borders the sea, the obvious answer is desalination.

Gaza already hosts 18 small plants, one treating seawater and the others water from brackish wells - most of them supplied by UNICEF and the OXFAM charity.

The Palestinian Water Authority has started work on two new seawater desalination plants and is planning to construct a third, larger facility, which is designed to produce 55 million cubic meters of water a year.

But with funding for the $450 million project still uncertain, construction is not due to start until 2017.

By that time, cash-strapped Gaza may not have enough electricity available to power the energy-intensive plants. The United Nations estimates that Gaza already needs an additional 100 megawatts of production capacity, even before the big water facility is built.

Israel is trying to drum up aid for the territory, the senior security official said, alarmed at the prospect of a looming water catastrophe and possible humanitarian crisis on its doorstep in a few years.

"We have talked to everyone we know in the international community because 1.4 million people will be without water in a few years," he said, asking not to be named because of the sensitivity of the issue.

He said Israel, a leader in the desalination industry, was helping to train a handful of Gazans in the latest water technology, which the Palestinian Water Authority confirmed.

Sheikh called on international donors to help fund energy, water and sewage projects, warning of disaster if nothing happened.

"A small investment is needed to avoid a bigger one and it is a humanitarian issue that has nothing to do with politics or security," he said.

Posted by seemorerocks at 21:17