I wasn't going to even deign Obama's speech with a mention, but this headline from RT reveals the hypocrisy of Obama and his speech about 'tackling' climate change carried uncritically by the corporate media. 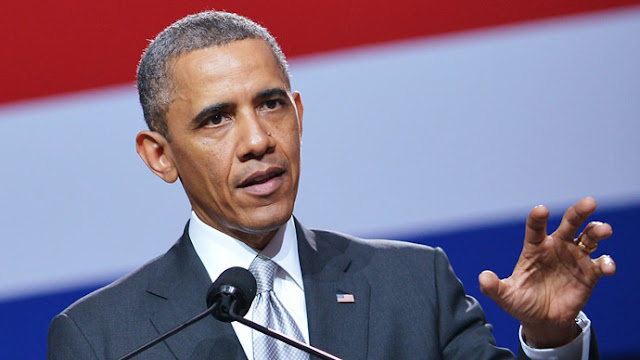 The president’s address at Georgetown University detailed his agenda to tackle global warming, but environmental activists may be disappointed to hear Obama's plan on the obscure pipeline project that has triggered rallies and protests from environmentalists across the US and Canada.

A YouTube video preview of the president’s speech depicts an oil refinery, not a coal-fired plant. Obama then announces his upcoming “national plan to reduce carbon pollution.” Obama will put the Environmental Protection Agency in charge of drafting a plan to set carbon emission limits on US power plants by June 2014. The EPA would also be in charge of finalizing plans for carbon limits on new power plants..

“We already set limits for arsenic, mercury and lead, but we let power plants release as much carbon pollution as they want,” one official told Reuters.

The White House is expected to issue its final verdict regarding the Keystone pipeline in September or October. Today Obama said that building the pipeline will only serve US interests if it doesn't significantly exacerbate problem of carbon pollution. Given the State Department's recent conclusion that the Keystone XL would have small impact on climate and tar sands, Obama's words seem to hint that the project will be approved soon.

The Keystone XL pipeline would transport oil sands bitumen from Canada to the Gulf Coast, stretching through the entire United States. Critics warn that constructing the pipeline would lead to drilling in Canada’s oil sands, thereby releasing large quantities of carbon dioxide that would further harm the atmosphere. Former NASA researcher and climate scientist James Hansen told the New York Times that the Keystone pipeline would be “game over for the climate.”

There has been speculation that the president would sign off on the project, despite the extensive opposition against it and his plans for clean energy. EPA Administrator Lisa Jackson allegedly told anonymous sources that the president would sign off on it in the spring, but he has not publicly made a decision on it. Some Republicans and businesses argue that the pipeline would create jobs and help the economy, and a recent Pew Research survey found that 66 percent of Americans who know about the pipeline support its construction.

But climate activists say it would make little sense for the president to approve the pipeline, since it would counter his plans for clean energy

“I do think that if they’re serious about carbon, and then they let Keystone go, it’s pretty hard to figure out what’s going on because the two are so in conflict,” Sen. Sheldon Whitehouse (D-R.I.) told Politico.

Some environmentalists remain hopeful that the president will disapprove of the pipeline, despite his recent lack of discussion on it.

“The president is a logical man, and hence it would seem so odd to take two steps forward and then two back,” anti-Keystone activist Bill McKibben told Politico. “And I’m certain he understands that KXL is the environmental fight of our time, the place where he’ll be finally judged.”

A senior administration official told Reuters that a decision on Keystone has not been made, but the president’s lack of comment on it may indicate that his decision may go against the will of environmentalists.


Here, from the Washington Post - Obama: Keystone pipeline must not increase greenhouse gases