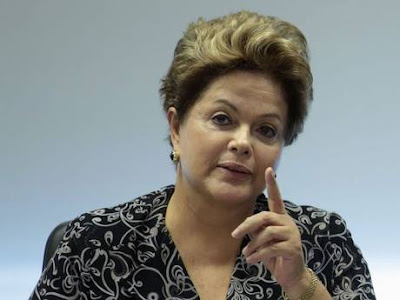 No concrete announcements resulted from the talks in the capital city of Brasilia, which Ms Rousseff described as the start of a dialogue with the nation's youth.

Though no follow-up meetings have yet been scheduled, the July 8 launch of a long-planned government website focusing on youth issues will help facilitate continued talks, Ms Rousseff's office said.

The demonstrations took off earlier this month over a 10-cent rise in bus and subway fares in Sao Paulo and evolved into a mass, nationwide movement voicing public anger over a range of issues such as government corruption, poor education and health care.

Riot police in Sao Paulo state used tear gas grenades to disperse a small group of demonstrators who had blocked a multi-lane highway, and another demonstration was under way in the north-eastern city of Natal.

Social networks, which were a main forum for organising protest last week that brought hundreds of thousands of people onto the streets, were abuzz yesterday with rumours of a general strike on Monday.

According to the posts on social media, the strike is to take place in every state and will focus on demands for better public services and an end to corruption as well as labour-related issues like reducing the work week from 44 to 40 hours and shelving a bill to allow companies to increase the use of outsourced workers.

However, representatives of Brazil's two biggest unions, the Central Workers Union and Union Force, said they knew nothing about a general strike. They said they are planning a national slowdown for July 11.