A week after a record heatwave set off highest ever temperatures in Alaska, massive forest fires are blanketing vast areas of wilderness. 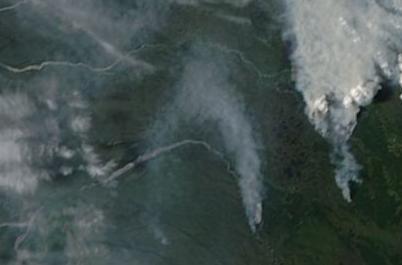 More than 80 fires are now raging across the state. The largest include the Lime Hills Fire at 154,000 acres and the Moore Creek Fire at 126,00o acres. In total, nearly 400,000 acres have burned so far this summer. For reference, an average full fire season in the US results in around 3 million acres burned. So the 400,000 acres for Alaska alone represents an abnormally large area burned, especially so early in the fire season and for a region at or above the Arctic Circle.

Like Colorado, where blazes resulted in record damage during June, the largest of the Alaskan fires, Lime Hills, currently threatens a local community. As of Tuesday, the fire had moved to within a half mile of the town which is located on the upper Stoney River just west of Fairbanks. About 70 firefighters are working to ensure no structures are taken by the blaze.

Though not as hot as last week, temperatures still remain in the range of record heat for interior Alaska with some regions Tuesday showing temperatures near 80 degrees (Fahrenheit). Daily record highs for this area range in the high 70s for this time of year. So record-breaking temperatures have become a day-to-day event for this Arctic region.

Fires in Alaska are a direct result of the extreme record high temperatures there. And these temperatures are also linked to a long-period warming trend caused by human-spurred global warming. Increasing heat, dryness and wildfires in vulnerable regions are just one result of the climate change caused by an excessive and continuous burning of fossil fuels. May of 2013 was the 3rd hottest on record, according to NOAA’s National Climate Data Center. Overall, temperatures are about .8 degrees Celsius above temperatures when climate records started in the 1880s. This difference is equivalent to that caused by the Little Ice Age, but on the side of hot.

Also in May, global atmospheric CO2 levels hit a record 400 parts per million. This level of Greenhouse gas is enough to raise Earth’s temperatures another 2-3 degrees Celsius long-term or about half the difference between now and the last Ice Age, but also on the side of hot. Long term results of 400 ppm CO2 also include a 75 foot rise in sea level. Unfortunately, due to a failure by the world’s leaders to enact appropriate CO2 reduction policies, CO2 levels are set to rise to around 550 parts per million by mid-century, enough to bake in a total temperature increase of around 7 degrees Celsius long-term. A virtual fire age.
Between now and then, and without proper policy measures aimed at reducing the damage, we can expect gradual but continually increasing global temperatures with increasing instances of extreme weather events.

The current Arctic heatwave is just one example of the strange climate we are creating. Let us hope that policy makers have gotten the message. We need to get to work before we set off even more dangerous events. 
Today, a heatwave circling the Arctic set its sights on central Siberia. Temperatures soared into the upper 80s to near 90 degrees (Fahrenheit) over a vast region of Siberian tundra, setting off pop-corn thunderstorms and sparking large, ominous fires reminiscent of the blazes that roared through this region during late June of 2012. Those fires were so large they sent a plume of smoke over the Pacific Ocean and blanketed valleys in western Canada.
Each individual fire in the above image hosts a plume of smoke about a hundred miles long. The fire to the far left, hosts a very long smoke plume of at least 350 miles in length.
You can see these soaring Siberian temperatures and related fires on the Arctic weather map below. Note the instances of 32 degrees Celsius temperatures (which is 89.6 degrees on the Fahrenheit scale).

(Siberian Heat. Image Source: Uni-Koeln)
If you look to the right side of the above map, you’ll see a large swath of pink spanning the Arctic from Norway all the way to the Pacific coastal region of Siberia. The most intense heat is located directly in the center of this zone where sporadic readings of 90 degree temperatures start to pop up. Fires are also shown on this weather map, indicated by a vertical black bar with a squiggly black line at the top.
Heatwave conditions also appear to have re-flared in Scandinavia where numerous instances of 80 degree + weather appear.
Alaska is in its ‘cool night-time’ phase. But even now, some locations in the interior are showing ‘lows’ of 70 degrees — which is hotter than usual highs for this time of year in that region.
Looking at the Jet Stream map for today, we see three anomalous pulses rising up over each of these regions.

(Image source: California Regional Weather Service)
The Siberian pulse rises just to the edge of the Arctic Ocean. The Scandinavian pulse hits the top of Norway and Sweden. Meanwhile, the Alaskan pulse rides all the way up into the Beaufort and Chukchi Seas.
Jet Stream waves should not penetrate so far into the Arctic. It is a situation facilitated both by eroding sea ice and by loss of snow cover during spring and summer. As of May, both sea ice volume and Northern Hemisphere snow cover were the third lowest on record. Back in September of 2012, Arctic sea ice hit a record low volume that was 80% below levels seen in the early 1980s.
This mangling of the Jet Stream has also been implicated in a number of severe weather events (spawned by blocking patterns associated with large waves in the Jet Stream) including the extreme European Winter and Spring of 2013, the US Drought of 2012-2013, Hurricane Sandy, and, now, various heat-waves striking the Arctic.