A regional war in the Middle East?

Are Al-Qaeda’s Lebanese Affiliates Opening a Lebanese Front in the Syrian War?
By Mahdi Darius Nazemroaya


The US and its allies are working to open a new front of the Syrian conflict inside Lebanon.
Lebanon has been sedated into a state of limbo by the lack of a government and the postponing of its parliamentary elections. Complicating matters, many institutional figures and military commanders have gone into retirement and the caretaker government is unable to replace them.
Hezbollah’s intervention into the Syrian conflict has given a boost to the Syrian government against the anti-government forces trying to overrun Syria.
This has turned the attention of the US and its allies onto Lebanon as a new arena of battle. Rockets are also being launched by anti-government forces from Syria, and even from inside Lebanon, against Hezbollah’s political strongholds and against Shia Muslim villages. The goal is to ignite the flames of sedition between Shiites and Sunnis inside Lebanon.
Right: Picture of the Hariris adorned with the Future Party’s flag and Al-Qaeda and anti-government Syrian flags by followers on the way to Sidon.  (Photo by Mahdi Darius Nazemroaya) 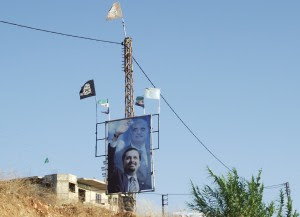 Al-Qaeda in Lebanon
Al-Qaeda’s flag has been flying in Lebanon for years. Driving near the airport in Beirut or on the road to Sidon (Saida) you can see the Al-Qaeda flags flying in black. The same goes for Tripoli (Trablos) and some areas inside Beirut. Since the Syrian conflict you can see them flying next to the Syrian insurgent’s flag. The US and its allies have actually turned a blind eye to the support that the Future Party of Saad Hariri provides to Al-Qaeda. It is worth noting that the current head of U.N. Secretariate’s Department of Political Affairs,  Jeffrey Feltman, who was once the US ambassador to Lebanon before he was promoted in the US Department of State, also turned a blind eye to the support for Al-Qaeda by Hariri family’s Future Party and its March 14 Alliance.
The Hariri family has had a long alliance with takfiris and Al-Qaeda supporters. They have been political allies with groups in Lebanon that openly revered Osama bin Laden. It was the Hariri family and members of their Future Party that also imported the fighters that would become Fatah Al-Islam into Lebanon. This exploitation of takfiri militias inside Lebanon by the Hariri family was intended for attacking Hezbollah. Regionally, the same strategy involved the Hariri family’s Saudi patrons and George W. Bush’s administration, which were preparing and arming these militias as weapons against Syria and Iran. The Hariris were furious when Seymour Hersh exposed it and had him publicly rebuked.
Months later Fatah Al-Islam would get out of control. The Hariri-led March 14 Alliance would dishonestly try to blame Syria and the Palestinians for supporting and creating the group. Seymour Hersh would be vindicated. The fighting in Lebanon between the Lebanese military and Fatah Al-Islam foreshadowed the armies that were being amassed for regime change in Libya and Syria.
Tripoli and Sidon as Extensions of the Syrian Conflict
Lebanon’s second largest city, Tripoli, has seen intense fighting between the Alawite community of Lebanon, which is represented by the Arab Democratic Party, and the Hariri family’s takfiri allies. Hariri’s allies in Tripoli are open supporters of Al-Qaeda and the anti-government forces in Syria; they have smuggled weapons across the Lebanese-Syrian and sent large numbers of fighters into Syria to topple the government in Damascus. The Future Party has been involved in coordinating this also.
Lebanese’s third largest city, Sidon, has also been the scene of fighting and tensions between Ahmed Al-Assir, a Hariri ally, and Hezbollah’s supporters and allies. Al-Assir’s men have even tried to kill one Sidon’s main Sunni Muslim clerics because he has constantly been saying that there is an attempt to ignite a Shia-Sunni conflict in Lebanon and the broader region. A contingent from the Lebanese military has had to keep the peace in the city.
Al-Assir’s men attacked and killed members of the Lebanese military for no apparent reason on June 23, 2013. This has ignited a battle in Sidon. Thick smoke from the city can be seen from a far distance. It has been reported that members of the anti-government forces from Syria have also joined him. The Lebanese military has deployed heavy weapons to fight Al-Assir’s group.
The Objective is to Force Hezbollah to Retreat in Syria by Targeting Lebanon 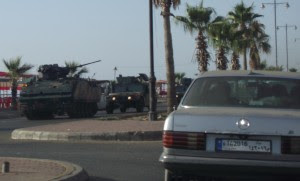 The Lebanese state is now being targeted. There have been an increasing number of attacks against the Lebanese military from the Syrian border since Hezbollah intervened in Syria. There were already attacks on Lebanon even before Hezbollah intervened in the Syrian conflict, but those were mostly intended to provoke Hezbollah.
Those targeting the Lebanese state are now taking advantage of the lack of a functioning government and the leaderless status of several national institutions to create a state of chaos in Lebanon. There have been attacks on both Shiite and Sunni villages in the Bekaa Valley and a cycle of violence has begun. It is clear that the objective is to turn Shiites and Sunnis against one another. This is why Hezbollah has asked the Shiites clans in Bekaa to stay calm. Protests have broken out in Lebanon too.
Lebanese Armed Forces checkpoint in Sidon. (Photo by Mahdi Darius Nazemroaya) 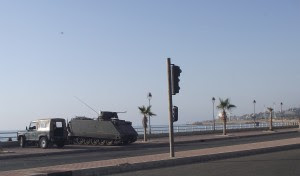 The violence in Sidon is part of a strategy. Al-Assir’s unprovoked attack against the Lebanese military is intended to mount pressure on the Lebanese state and exacerbate Shia-Sunni tensions.
Hezbollah refuses to get embroiled in a sectarian battle inside Lebanon. While the Amal Movement, the Shiite political party that is Hezbollah’s partner, has mobilized its militias and started manning the southern and eastern roads into Sidon, Hezbollah has kept calm. Amal’s media has also been reporting on the incident profusely and even in a sectarian fashion, but Hezbollah’s media have stated calm and said little.
Lebanon is being lit up with the aim of forcing Hezbollah to pullout from Syria by turning inwards.
Essentially, it is now a second front in the Syrian conflict.
The US and Saudi Arabia have probably asked the Hariri family to prompt their Al-Qaeda affiliated clients to initiate violence in Lebanon and capitalize on the lack the weakened state of the Lebanese state.
Mahdi Darius Nazemroaya is a sociologist and Research Associate of the Centre for Research on Globalization (CRG). He is currently reporting out of Lebanon. He was in Sidon during the fighting and the deployment of the Lebanese military.
Posted by seemorerocks at 13:49