While the corporate media dopes 'feel-good' articles about Obama's trip to South Africa... 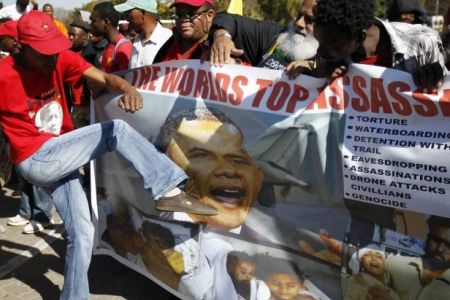 Demonstrators expressed their opposition to Washington’s support for the Israeli regime, the killing of innocent civilians in U.S. drone strikes, and the continuing operation of the U.S.-run Guantanamo Bay prison.

Some protesters compared the Obama administration’s support for the Israeli regime to the apartheid in South Africa.

Obama and his family arrived in South Africa on Friday for the second leg of their tour of three African countries which has been estimated to cost American taxpayers up to $100 million.

On Friday, hundreds of protesters also marched to the U.S. Embassy in Pretoria carrying signs that read “NO, You Can’t Obama”, a reference to Obama’s “Yes We Can” campaign slogan during his first run for election.

Obama, the first African-American president of the U.S., had planned to visit anti-apartheid legend Nelson Mandela, whom he has called his “personal hero,” however, South African protesters warned that Obama should not try to link himself to Mandela


Prior to Obama’s visit to South Africa, the Muslim Lawyers Association in Johannesburg said Obama should be arrested upon arriving in the country and be tried for war crimes