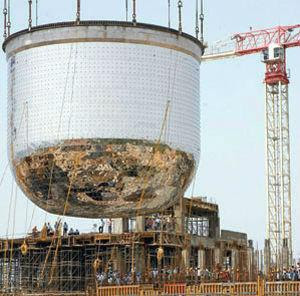 Confirming the presence of an underwater volcano five weeks ago, an AERB reply to an RTI query said the Geological Survey of India (GSI) has also recommended an advanced study to figure out the status of the volcano, though initial investigations did not detect any significant geological signs.

AERB said the National Institute of Oceanography (NIO), Oil and Natural Gas Corporation (ONGC) and GSI have recommended further analysis in view of an "inferred high density material intrusion of remnant magnetization based on magnetic and gravity anomalies" around the location of the volcano. AERB had appointed these national agencies to study the possible threats and geological status of the underwater volcano after Smithsonian's Global Volcanism Program (GVP) released a document on the reported volcano in 1757, located about 100km-110km from the Indira Gandhi Centre for Atomic Research (IGCAR), Kalpakkam.

According to GVP, a US government agency based in Washington DC studying active volcanoes and their eruptions during the last 10,000 years, says the undersea eruption of the volcano happened last on January 20, 1757, off Puducherry, resulting in the formation of a new island. However, AERB said GSI's offshore surveys did not find any existence of an island. Also, it added that the seismic data and wells drilled by ONGC in the vicinity did not indicate any volcanic intrusions.

In last September, V Pughazhendi and R Ramesh, two activists of the Peoples Movement for Nuclear Radiation Safety, who published a book compiling the documentary evidences of the volcano, demanded that the AERB conducts an advanced study. The AERB study is in progress and the International Atomic Energy Agency (IAEA) insists countries should ensure safety and protection if they had built reactors without considering the effect of volcanoes in their vicinity.

Besides two power plants in Kalpakkam, a senior AERB official said, a fast breeder test reactor facility and a fuel reprocessing facility are in the vicinity. A 500MW prototype fast breeder is also being built at Kalpakkam.
Posted by seemorerocks at 14:33