Water shortages in the South-West

A few articles that point to the problems faces in the SW of the United States, in the light of the current heatwave.

"It doesn’t look good for river-rafting companies"!  What about life!

An anemic snowpack in the southern San Juan Mountains this past winter is going to leave Southwest Colorado and the Upper Rio Grande basin to the east with stream flows well below average, the Natural Resources Conservation Service reports.

The outlook contrasts markedly with what the northern tier of the state can expect, the agency said in its June report.

In the combined Animas, San Juan, Dolores and San Miguel basins, the snowpack stood at 2 percent of the median as of June 1. The neighboring Rio Grande basin also was at 2 percent.

By contrast, the statewide median snowpack was 92 percent, with the South Platte and Colorado River basins at 153 and 108 percent, respectively.

“This time last year, the river (Animas) was flowing at 300 cfs (cubic feet per second),” OKeeffe said. “I did one run with 172 cfs, by using every trick in the book.”

The best trick is a large boat with a broad bottom because it draws less water, OKeeffe said. A skilled guide can get through with 2 inches of clearance on either side of the craft.

The Animas River has seen its best day this season, Jeff Titus at the Division of Water Resources office in Durango said Thursday.

Titus said summer rain won’t increase the flow, but could reduce the amount drawn from irrigation ditches that take water from the Animas.

“The snowpack data shows the profound impact that a cool and wet spring can have on the state’s water supply,” the NRCS said in a release. “The mountain snowpack typically reaches its seasonal maximum in early April but this year reached its peak on April 21.”

Late-season snow in April and early May considerably improved the water-supply outlook in the northern basins, the NRCS said.

“Cool weather has helped delay snowmelt across higher elevations and continued wet weather patterns in the northern part of the state have contributed to additional snow accumulation in the high country,” the release said.

Despite the light snowpack last winter, the four river basins in Southwest Colorado in January had an average snowpack of 70 percent of median, exactly the same as the statewide average.

The water is running again in Magdalena, the central New Mexico town where the well ran dry in early June, but the crisis isn’t over.

Yes, water spurts from the faucets in the village of about 1,000 people – but there’s not much of it and the future is pretty iffy. The sign on the village hall front door says “This is still a crisis” and they got that right.

“We have some water in our lines,” said village mayor Sandy Julian. “People are thinking that we’re dry completely. We’re not. We have some water. We don’t have as much as we used to. We’re only pumping 50,000 gallons a day.”

That’s about one quarter of what they used to pump in Magdalena. The well that dried up now has some water trickling back into it and the little cow town is open for business again.

There are still porta-potties all over town.

“This whole thing, you’re living with it, picking up your plastic bottled water,” said village homeowner Matt Middleton. “You just realize how much plastic is going into this entire system within the landfills. Everything from this nightmare – it’s really something!”

Rehab work on an old village well is expected to start next week, then engineers plan to re-drill the well that’s providing a trickle now. But Magdalena is not out of the woods yet. Ranchers with private wells in the area report falling water levels. It’s the extreme drought – now entering its third straight summer with no end in sight.

Colorado Basin shortages possible by 2016
The Colorado River Basin could see shortages as early as 2016, according to a new analysis by the U.S. Bureau of Reclamation. 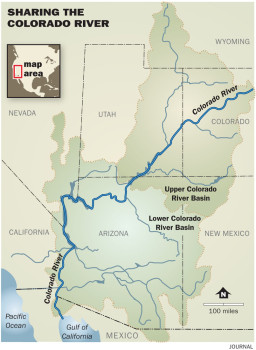 Initially, shortages would be borne by Nevada and Arizona, but states using water farther up the river’s basin, including New Mexico, could see shortages in the years that follow, Mike Connor, head of the Bureau of Reclamation, told the Journal in an interview Tuesday.

The San Juan River, one of the Colorado’s largest tributaries, is a major source of water in New Mexico. In addition to serving the Navajo Nation and other communities in northwest New Mexico, San Juan water is transferred through tunnels to the Rio Grande Valley, where it is used for drinking water in Albuquerque and Santa Fe.

With the Colorado in drought since the late 1990s, major water users have continued to get full supplies by slowly draining the river’s major reservoirs, which were built for just that purpose. But Lake Mead, the reservoir near Las Vegas, Nev., that provides water for Arizona, Nevada and California, is dropping fast. This year alone, the big storage reservoir’s surface level is projected to drop 11 feet, enough water to serve some 2 million typical households.

By 2016, there is a one in three chance of it dropping so low that the federal government will reduce the amount of water it delivers to Arizona and Nevada, according to Connor.

While that will not affect New Mexico in the short run, shortfalls projected in the long run could force New Mexico and other states in the Colorado’s upper basin – Wyoming, Colorado and Utah – to also grapple with shortages, Connor said.

Connor’s comments came as water managers from around the western United States gathered this week in San Diego to begin talks about how to deal with increasingly chronic shortages on the Colorado, as population growth drives up demand while climate change reduces flow in the river.

In December, the Bureau of Reclamation released a massive study documenting the long-term risk to Colorado Basin water supplies, along with a long list of possible options to deal with the problem.

The San Diego meeting launched a review of those options, including a search for those that can be realistically implemented in the near term, said Estevan López, head of the New Mexico Interstate Stream Commission. “If it’s real, let’s make it happen,” López said in a telephone interview from San Diego, where he was representing New Mexico at the meeting.

Ideas on the table range from increased municipal water conservation efforts to water-trading agreements among users.

In New Mexico, the effect of a Colorado Basin shortage would be felt by users of water from the San Juan River, where the state of New Mexico, the Navajo Nation and the federal government are close to culminating a major deal settling the Navajos’ water rights.

There is a great deal of legal uncertainty about who might see their water deliveries reduced, and by how much, if Lake Mead and the other Colorado Basin reservoirs keep dropping beyond 2016. But under the state-federal-Navajo agreement, if a shortfall forces water use cutbacks on the San Juan River, the Navajo Nation’s large agricultural operation, which uses water stored behind the Bureau of Reclamation’s Navajo Dam, would be among the first to be curtailed, according to López.

The state-federal-Navajo agreement also sets aside a large pool of water for Albuquerque and Santa Fe in an effort to ensure their use of Colorado Basin water would not be curtailed in a shortage.

Posted by seemorerocks at 14:52