Edward Snowden is not booked to fly out of Moscow over the next three days, and with no valid passport, the NSA whistleblower might be stuck in airport limbo indefinitely.

The hot pursuit of Snowden has ground to a halt three days after the former CIA technician, wanted in the US on espionage charges, flew into Moscow’s Sheremetyevo Airport from Hong Kong.

Washington, which wants Snowden for leaking details of the National Security Agency’s (NSA) dragnet telephone and Internet surveillance programs, charges that there is a clear legal basis for Moscow to hand him over.

Russian President Vladimir Putin, who confirmed that Snowden had arrived in Moscow as a transit passenger despite speculation to the contrary, rebuffed US demands on Tuesday.

“We can only extradite any foreign citizens to such countries with which we have signed the appropriate international agreements on criminal extradition,” Putin said, adding that as Snowden had committed no crime on Russian soil, he is free to travel at will.

"Snowden is a free person. The sooner he chooses his final destination, the better it is for him and Russia," Putin continued. 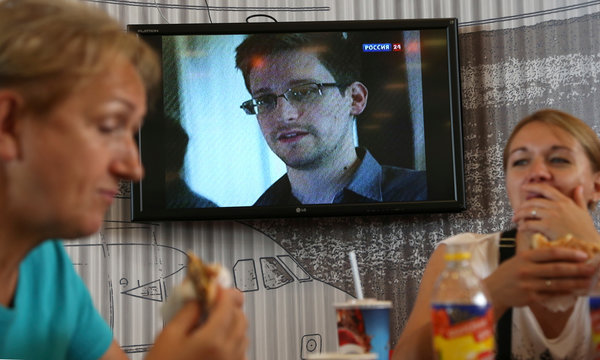 However, the former NSA contractor appears to be staying put, as neither him nor his WikiLeaks-affiliated legal adviser Sarah Harrison have made travel plans over the coming days.

"They are not flying today and not over the next three days," an Aeroflot representative at the transfer desk at Sheremetyevo told Reuters.

"They are not in the system."

Snowden’s stopover in the transit zone at Sheremetyevo could be prolonged indefinitely, as his passport, which was annulled by the US on Saturday, leaves him without the necessary documentation with which to travel, a source reportedly connected with Snowden told Interfax.

“Snowden’s American passport is void and he is not in possession of any other document with which he can prove his identity. For this reason, he has to stay in Sheremetyevo’s transit zone and cannot leave Russia nor buy a ticket,” the source said.

WikiLeaks founder Julian Assange told RT that Snowden had been given special refugee documents by the Ecuadorian government which facilitated his travel to Russia. Still, the country's top Foreign Ministry official, Galo Galarza said on Wednesday that Ecuador has not granted Edward Snowden any refugee documents.
"He [Snowden] does not have a document issued by Ecuador, such as a passport or a refugee card, as speculated," said Galarza, as quoted by Ecuadorian television channel CT. So now it is unclear whether the whistleblower can continue traveling at all.

WikiLeals warned via Twitter on Wednesday that "cancelling Snowden's passport and bullying intermediary countries may keep Snowden permanently in Russia.”
Snowden, who has applied for asylum in Ecuador, was expected to make the next leg of his journey on Monday, as he had booked two tickets to Havana, Cuba. Snowden never showed for the flight, and according to RIA-Novosti, two tickets which he later booked for a Tuesday flight to the Cuban capital were returned just hours before departure. The next flight to Havana leaves on Wednesday.

If he ever makes it to Cuba, the next stop in his journey would be Caracas, Venezuela. President Nicolas Maduro, who coincidentally is expected in Moscow next week for an energy summit, has said Caracas would also consider an asylum request from the whistleblower.

Although dozens of Moscow-based journalists have been staked out at the airport since Sunday, not a single image of Snowden has surfaced.

A receptionist at the Air Express Capsule Hotel in Terminal E of Sheremetyevo Airport told RIA-Novosti that Snowden had in fact spent several hours in one of the suites, “but left a long time ago.”

Several journalists attempted to make contact with Snowden during his stay at the hotel, but were unsuccessful, the hotel employee continued.

It has been speculated that Snowden, who remains at an undisclosed location within the transit zone, is purposely being held up by Russian security services for interrogation.

WikiLeaks has refuted the accusation, saying Harrison "is escorting him at all times."

Edward Snowden 'not likely to gain asylum in Ecuador for months' 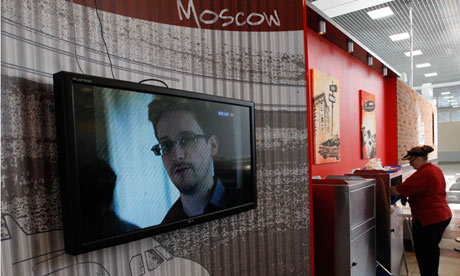 Ecuador has said it could take months to decide whether to grant asylum to Edward Snowden, potentially confining the US whistleblower to the halls of a Russian airport for weeks to come.

Ricardo Patino, Ecuador's foreign minister, said Snowden's case was similar to that of the WikiLeaks founder, Julian Assange, who has been granted asylum at the country's embassy in London.

"It took us two months to make a decision in the case of Assange, so do not expect us to make a decision sooner this time," Patino said during a visit to Malaysia. He said Ecuador would "consider all the risks" in granting asylum, including concerns that it could harm trade ties with the US.

Sander Levin, a US congressman, told The Hill newspaper on Wednesday that if Ecuador granted Snowden asylum there was no "basis for even discussing" extending a trade deal up for renewal in July.

Vladimir Putin, the Russian president, confirmed on Tuesday that Snowden had arrived in Moscow's Sheremetyevo airport and was waiting in its transit area following days of speculation as to his whereabouts.

Reporters at the airport have seen no sign of Snowden, fuelling suspicion that he is being hidden by the Russians.

Despite remarks by Putin that he hoped Snowden would leave the country soon, it appeared Snowden might have to settle in at the Sheremetyevo airport for a while.

An anonymous source told the news agency Interfax that Snowden lacked documents that would allow him to travel.

"Snowden's US passport has been cancelled, he has no other identification documents in his hands," the source said. "So he's required to stay in Sheremetyevo's transit zone, since he can't leave Russia or buy a ticket."

The official Twitter site for WikiLeaks also proposed that Snowden would be bound to the Moscow airport for the foreseeable future.

"Mr Snowden is not being 'de briefed' by the FSB," the group said, adding that he was well.

Yet Snowden lost a supporter on Wednesday when the Spanish judge Baltasar Garzón said he would not represent him. Snowden has been charged under the espionage act for gathering and leaking classified materials. Garzón, who represents Assange, offered no explanation.

Russian officials have been lining up to throw their support behind Snowden since he first landed in Moscow on Sunday.

On Wednesday, Alexey Pushkov, head of the Duma's international affairs committee, said: "Assange, [Bradley] Manning, and Snowden, were not spies and didn't give up secret information for money but out of conviction. They are the new dissidents, fighters of the system."

Russia's embrace of Snowden stands in stark contrast to its own record on human rights and the treatment of whistleblowers.

Putin and his foreign minister, Sergei Lavrov, have lashed out at the US for demanding Snowden's extradition and implying Russian involvement in his flight.

Putin presented Snowden as just another transiting passenger, and Russian news agencies on Wednesday continued their campaign of possible disinformation, citing an anonymous source who claimed that he had checked in to an airport hotel but checked out a few hours later.

Reporters staking out the hotel caught no site of Snowden and receptionists there had no memory of him.

A top story on the evening news, run from the Kremlin, discussed the possibility of Russia's granting Snowden political asylum.

Andrei Soldatov, an expert on the Russian security services, said: "I don't think he's just wandering around. It seems he is hiding in some place or they are hiding him."

Soldatov said he did not think Russia would accept Snowden permanently. "In this case, it would be completely impossible to say he was not briefed by the FSB – even now, it's quite difficult to say he's not being briefed."

He said he expected the guessing game to continue, however. "I think the Kremlin just enjoys it."

Elsewhere in Europe the reverberations continued following Snowden's revelations on the extent of British electronic eavesdropping, as the human rights watchdog, the Council of Europe, took issue with attempts by the UK foreign secretary, William Hague, to play down the impact of the disclosures.

"Privacy is a fundamental human right which is essential if we wish to live in dignity and security. It cannot be forfeited so easily," Nils Muiznieks, the council's commissioner for human rights, wrote in a commentary for the Guardian.

Muiznieks acknowledged the duty of the state to ensure national security but added: "Those who implement secret surveillance measures risk undermining or even destroying democracy while pretending to defend it."

He advocated a new set of safeguards, including greater clarity over the laws governing surveillance, firm guidelines on the use and storage of surveillance data, and the creation of oversight bodies "accountable to parliament rather than the executive".

In Westminster, British MPs are due to meet on Thursday to hear expert testimony on the impact on British citizens of Prism, the US internet surveillance program exposed by Snowden.