Despite the jump in French PMI (though still in contractionary region), the number of French Jobseekers rose once again (up 11.5% year-over-year) to a new all-time record. As the nation struggles with near Depression-era activity, it seems the green shoots that Draghi's jawboning once again provided today remain a long way off in real-world land. 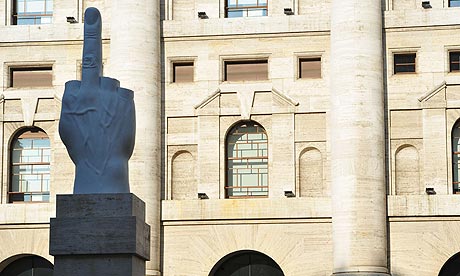 Italy's government unveiled a package of measures aimed at bringing down Italy's high youth unemployment, fulfilling one of the signature promises of the shaky government.

With the measures introduced on Wednesday, Prime Minister Enrico Letta hopes to persuade the European Union at a summit this week to grant Italy new tools that could help it boost growth and employment.

The stakes are high, with pressure building on Mr. Letta's young and fragile coalition to take bolder action, as Italy's economy continues to deteriorate and the cost of servicing Italy's enormous debt soars.

Mr. Letta's coalition, which includes his own center-left Democratic Party and Silvio Berlusconi's conservative People of Freedom party, is racing to push through critical reforms aimed at shaking up Italy's sclerotic economy, changes that Rome has for years tried and failed to pass. Mr. Letta must navigate conflicting demands from his coalition partners, with some political analysts predicting the government could fall by early next year.

In turn, Italy's economic weakness -- the current recession is the longest in decades -- is raising fresh concerns that it will struggle to service its 2 trillion euro ($2.6 trillion) debt pile.

Expectations that central banks could shut down the country's flood of liquidity has pushed up the extra premium demanded by investors to hold 10-year Italian debt instead of the euro zone's gold-plated standard, German bunds. That spread has widened by nearly a half-percentage point since early May, when Federal Reserve Chairman Ben Bernanke hinted the Fed could soon scale back its bond-buying program.

Wednesday's job measures, which are valued at a total of 1.5 billion euros, include training measures as well as incentives that would cut payroll taxes for companies that hire people age 18 to 29 on permanent, full-time contracts. Italian unemployment stands at a record 12%, with youth unemployment exceeding 40%, national statistics agency Istat says. The youth rate covers only those actively seeking work, not those in school.

The government expects the new measures to help 200,000 young people find jobs -- a small portion of the total jobless youth. The funds to cover the new measures would partially come from untapped EU funds.

The measures are included in a decree, which is immediately effective but needs parliamentary approval within 60 days.

Mr. Letta hopes the job measures will strengthen his hand at the EU summit starting Thursday in Brussels, including the possibility of finding fresh funds aimed at stimulating growth. The euro zone is split on whether to ease austerity measures that have weighed heavily on the Continent's south.

"These measures allow us to go to this EU summit with a stronger voice to turn this battle into a European battle," Mr. Letta said.

The government also froze a planned value-added tax increase of about 1 billion euros for just three months. The debate over the VAT has heightened tensions with Mr. Berlusconi, who has insisted on definitively shelving both the VAT increase as well as an unpopular property tax

Euro-Zone Lending Falls Further in May
Euro-zone credit conditions worsened in May, as lending to both households and businesses fell sharply, data from the European Central Bank showed Thursday

Lending to non-financial firms fell another 17 billion euros ($22.18 billion) in May, after registering a EUR17 billion decrease in the previous month, the data showed. Meanwhile, loans to households dropped EUR8 billion on the month, after a EUR1 billion increase in April.

It is clear that the euro-zone is suffering from a combination of limited supply and muted demand for credit, Howard Archer, chief European and U.K. economist for IHS Global Insight, said in a note.

"It is likely that banks believe the economic situation and outlook in many euro-zone countries continues to provide a risky backdrop in which to lend," he added, noting that euro-zone economic activity is still generally weak.

Growth of M3, the ECB's preferred measure of broad money supply, slowed to 2.9% on year in May from 3.2% in April, matching analysts' expectations.

On a three-month average from March to May, M3 growth was also 2.9%. The three month average remains below the ECB's " reference value" of 4.5%, which it considers to be consistent with the price-stability mandate. 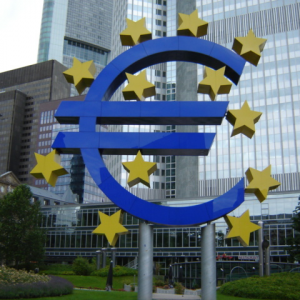 Did you actually believe that they were not going to use the precedent that they set in Cyprus?

On Thursday, EU finance ministers agreed to a shocking new plan that will make every bank account in Europe vulnerable to Cyprus-style bail-ins.

In other words, the wealth confiscation that we just witnessed in Cyprus will now be used as a template for future bank failures all over Europe.

That means that if you have a bank account in Europe, you could wake up some morning and every penny in that account over 100,000 euros could be gone.  That is exactly what happened in Cyprus, and now EU officials plan to do the same thing all over Europe.  For quite a while EU officials insisted that Cyprus was a "special case", but now we see that was a lie.  International outrage over what happened in Cyprus has died down, and now they are pushing forward with what they probably had planned all along.

But why have they chosen this specific moment to implement such a plan?  Are they anticipating that we will see a wave of bank failures soon?  Do they know something that they aren't telling us?

Amazingly, this announcement received very little notice in the international media.  The fact that bank account confiscation will now be a permanent part of the plan to bail out troubled banks in Europe should have made headline news all over the globe.  The following is how CNNdescribed the plan...

European Union finance ministers approved a plan Thursday for dealing with future bank bailouts, forcing bondholders and shareholders to take the hit for bank rescues ahead of taxpayers.


The new framework requires bondholders, shareholders and large depositors with over 100,000 euros to be first to suffer losses when banks fail. Depositors with less than 100,000 euros will be protected. Taxpayer funds would be used only as a last resort.

According to this new plan, bondholders will be the first to be required to "contribute" when a bank bailout is necessary.

Do you want to guess what that is going to do to the price of European bank bonds?

Shareholders of the bank will be the next in line to get hit when a bank bailout happens.

After that, they will go after those that have more than 100,000 euros in their bank accounts.

EU officials say that such a plan is needed because bailing out banks with taxpayer money was creating too many problems...


But a bailout of Cyprus in March that forced losses on depositors marked a harsher approach that can now, following Thursday's agreement, be replicated elsewhere.

Oh wonderful - the "Cyprus solution" can now be "replicated" everywhere in Europe.

This plan will now be submitted to the European Parliament for final approval.  The goal is to have this plan finalized by the end of this year.

If you have a bank account in Europe with over 100,000 euros in it, get your money out now.

I am not sure how else to say it.

In Cyprus, there were retirees and small businesses that lost hundreds of thousands of euros overnight.

Do not let that happen to you.

And without a doubt, we are going to see a lot of banks fail in Europe over the next few years.  This will especially be true once the next great financial crisis strikes.

But even though we haven't even gotten to the next great financial crisis yet, the economic depression in Europe just continues to get even worse.  Just consider these facts...

-Car sales in Europe have hit a 20 year low.

-Overall, the unemployment rate in the eurozone is sitting at 12.2 percent.  That is a brand new all-time record high.

-An average of 134 retail outlets are shutting down in Italy every single day.  Overall, 224,000 retail establishments have closed down in Italy since 2008.

-It is being projected that Italy will need to ask for an EU bailout within 6 months.

-Consumer confidence in France has dropped to an all-time low.

-The unemployment rate in France is up to 10.4 percent.  That is the highest that it has been in 15 years.

-Government is now responsible for 57 percent of all economic output in France.
-In May, household lending in Europe declined at the fastest pace in 11 months.

-During the first quarter, disposable income in the UK declined at the fastest pace in 25 years.

-It is being projected that the unemployment rate in Spain will hit 28.5 percent next year.

-Just a few years ago, the percentage of bad loans in Spain was under 2 percent.  Now it is sitting at 10.87 percent.

-The national debt in Spain has grown by 19.1 percent over the past 12 months alone.

-The Greek government says that the Greek economy will shrink by 4.5 percent this year.

-It is being projected that the unemployment rate in Greece will rise to30 percent in 2014.

And it certainly does not help that China has essentially declared a trade war on Europe.  That is not going to help struggling European industries at all.

I hope that more Americans will start paying attention to what is happening in Europe.  The crippling economic problems that are sweeping across that continent will come here too.

And at some point there is a very good chance that we will also see Cyprus-style bank account confiscation in this country.

So don't put all of your eggs in one basket.  It is good to have your assets spread around a bunch of different places.  That makes it much harder for them to be wiped out all at once.

What we are watching in Europe right now is really unprecedented in modern times.  They are declaring open season on large bank deposits.  In the end, a lot of people in Europe are going to lose a lot of money.

Make sure that you are not one of them